Book Review: A Case of Bier by Mary Daheim 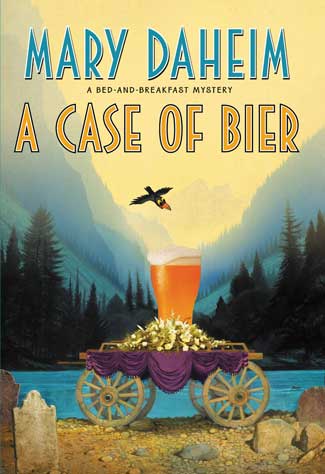 A Case of Bier

A Case of Bier by Mary Daheim is the 31st Bed-and-Breakfast Mystery, where innkeeper and amateur sleuth Judith McMonigle Flynn’s plans for a relaxing vacation go awry when she realizes her fellow guests have a different kind of getaway planned.

Innkeeper Judith McMonigle Flynn has a nose for ferreting out mysteries in the most ordinary of circumstances, and she’s not bad at solving them either. A Case of Bier is the 31st in Mary Daheim’s Bed-and-Breakfast Mystery series. It’s August 2006. Judith’s husband, Joe, and her cousin-in-law Bill plan a vacation to Canada’s Banff and Lake Louise for themselves and their wives.

Ordinary tourists look for great scenery, fabulous food, luxurious accommodations (if that’s in the budget), and a respite from day-to-day. For an innkeeper who’s in the business of providing strangers with a cozy, comfortable retreat on a 24/7 basis, what are her R&R expectations? Presumably, they’re heightened. Judith and her husband run “Seattle’s popular Hillside Manor B&B.” Gertrude, Judith’s demanding mother, lives in a toolshed converted to granny quarters in their backyard. The B&B’s busy time starts in mid-June, and by August, Judith is ready for a vacay. Gertrude doesn’t hold out much hope for the success of their jaunt.

“Dumb. Not as dumb as you and my niece letting the idiots you married arrange your trip. You’ll be lucky if you don’t end up staying in a wigwam.”

“We’ll be at the historic hotel in Banff,” Judith responded. “You remember it from when we went there with Renie’s folks back in the fifties.”

“Never mind.” Tired of standing in the sun and even more tired of arguing with her mother, she headed back to the house to get Gertrude’s so-called-supper.

Hit the road, Jack Joe—Judith is champing at the bit to let someone take care of her for a change. Two days later, they’re off. Renie, a corporate designer and wordsmith, is blown away by the scenery, as gorgeous as she remembers.

“Grandeur!” Renie exclaimed. That’s the word to describe the scenery. The majestic, verdant evergreen trees, the austere, craggy mountains, the glittering, jewel-like lakes! That’s the kind of language I’ll use when I design T-Nubile’s new brochures. They’ll foam at the mouth.”

Bill, who had been napping, stared at his wife. “What has any of that got to do with telephone networks? I don’t see the logic of your emotionally overwrought approach.”

Before Dr. Bill and Renie can really start slinging hash and flinging around words like psychobabble and patients and rubbish, they spot the Banff Springs Hotel, looking for all the world “like a Scottish castle,” right in time to eat.

“Yay! Renie cried. “They have a fabulous restaurant. I’m starving.”

“You usually are, coz,” Judith said good-naturedly. “I’m kind of hungry, too. It’s going on one.”

Time to check in. The men, being the trip planners and organizers, head off to the lobby while Renie dreams of a “lavish lunch” and Judith reminisces about family summer vacations. Idyllic, right? Wrong. No suite for them. Joe and Bill break the bad news to their wives: “We didn’t get any of their suites. We … didn’t even get rooms.” What did Gertrude say about wigwams? The gentlemen booked the party into the Banff Springs Motel. Adding insult to hunger pangs, the dining room is fully booked. Judith thinks to herself, “at least they were in beautiful Banff. What could possibly go wrong?”

Wrong is around the corner in the persona of the Stokes family. While the men collapse after their trying day, the cousins go exploring. By the side of the Bow River, they run into some American campers who shout out at them, “You from the funeral home?” Nope, the motel. The group’s leader, Teddy Stokes, explains.

“You might as well meet the rest of us Stokes folks while we’re all still alive.”

“You expect to be dead soon?” Renie blurted. “Won’t that spoil your vacation plans?”

“Huh?” Teddy said over his shoulder. “I mean Codger. He’s older than dirt and just about gone. Who wants to live to be a hundred? No point when you’re feeble. I expect he’ll hang in there for an hour, hour and a half, maybe. The ride from Big Stove, Nebraska, plumb tuckered him out.”

The “bier” in the title is the funeral bier that the family has in mind for Codger, “to give a relative a proper and permanent sent-off.” The trouble is, Codger isn’t dead yet, and Judith and Renie, in the days ahead, keep finding what they assume is his newly deceased body. Unfortunately, when they try to tell Dudley Do-Right, aka the Canadian Mountie in charge of police matters in Banff, they can never produce the body. Humour (notice the Canadian “u”) ripples through the tension between the investigating tourists from Seattle and the local constabulary. A Case of Bier is “charming, madcap,” with a whimsical resemblance to Weekend at Bernie’s.

Judith attracts death and odd circumstances, like the big Canadian mosquitoes that glom onto her and Renie. It’s as well the husbands are off at a fly-fishing boot camp because the cousins are up to their ears in mayhem. Fans of the Bed-and-Breakfast Mystery series will enjoy the familiar tropes that weave through the investigation, like Renie’s need to sleep late and eat immediately upon awakening. She’s like the character in Dicken’s A Christmas Carol, who when asked if he’ll attend Scrooge’s funeral, says, “he must be fed.” Judith, being the older relative, always takes charge, and that rankles Renie a bit. Canadian readers will enjoy the clichés about how tourists from below the 49th parallel view what Canada has to offer. Judith and Renie’s “busman’s holiday” is an enjoyable getaway for readers, and the gorgeous Banff setting is icing on the cake.