October 17, 2019
New York Times bestselling author Deborah Crombie returns with A Bitter Feast, a mesmerizing entry in the Duncan Kincaid/Gemma James series, in which the Scotland Yard detectives are pulled into a dangerous web of secrets, lies, and murder that simmers beneath the surface of a tranquil Cotswolds village. 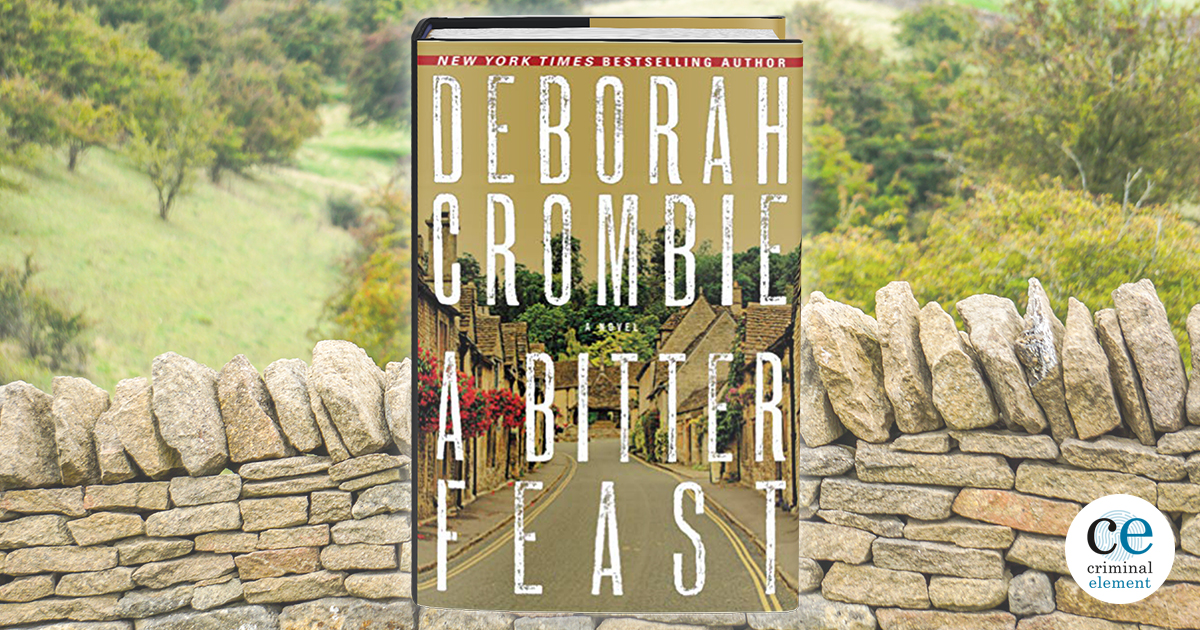 A Bitter Feast is the 18th Duncan Kincaid mystery. Crombie’s police procedurals come with a side-benefit: you’ll have an armchair holiday in the British Isles, complete with a detailed map. Readers will be enthralled by the beauty of the Cotswolds and experience a country house weekend vicariously, through the generous auspices of Melody Talbot, “Gemma’s trusted detective sergeant.”

“Mum’s putting on this big harvest festival do,” Melody had said. “She wants to meet you and Duncan. And Doug, too, God knows why. Do come. Seriously.” Moved by an unexpected vulnerability in Melody’s expression, Gemma had impulsively agreed.

Gemma and her daughter Charlotte drive to Beck House with Melody: “‘I want my tea,’ Charlotte said plaintively.” Melody assures Charlotte that they’re almost there and that she’ll love it. But much like J.D. Robb’s Eve Dallas, Gemma has her doubts about the bucolic version of the high-life.

Charlotte might, but Gemma was not at all certain about this country-house lark. She was a townie through and through. The city fit her like an old shoe, made her feel safe and comfortable. Outside of its confines she wasn’t quite sure what to do with herself.

Gemma is transfixed by her first glimpse of Beck House which truly beggars description.

The covered entry opened into a large dark-beamed hall that ran the depth of the house. Sun falling through the west windows painted the pale cream walls with blocks of gold, and through windows on either side of a staircase at the back, Gemma saw a garden and the green of rising hills. A fire already crackled in a large fireplace set at a right angle to the front door.

Bitter Feast was a 2010 comedy/horror film: “A celebrity chef exacts revenge on a food blogger who torpedoes his career.” A Bitter Feast is centered around a celebrity luncheon for charity in the Cotswolds. Melody’s mother, Lady “Addy” Adelaide’s “big harvest festival do” features “up-and-coming chef Viv Holland.” Holland is the chef of a homey pub restaurant, where she transforms the bounty of the countryside into sumptuous meals.

Sometimes protagonists in criminal procedurals are tarred with the brush of blood. Duncan Kincaid, behind the wheel of his trusty Astra, is driving in the dark by the time he gets close to Bourton-on-the-Water, the closest town to the Talbots’ village. There’s no sat-nav in his old car so he’s being cautious.

He was wondering if he should find a place to pull over and check the map on his mobile when headlamps blazed suddenly from his left, blinding him.

Before he could throw up a hand or hit a brake, there came a tearing impact, and all went dark.

Duncan’s alive but he and his car are a right mess. He notices two sets of headlamps ahead. One of the cars is wrecked, with two people inside. A woman from the other car tells Duncan she’s going to call for help and would he “just talk to this lady here while I do that?” The woman is trapped and conscious: the body beside her is still. Fading fast, she asks Duncan if he’ll stay with her. When she says, “I didn’t mean . . .” Duncan reassures her.

“It’s all right,” he told her. “It was an accident.” He thought he heard sirens in the distance.

“No.” The woman turned her head until she could meet his gaze. “I didn’t … He was …” Her fingers tightened in his. “Please,” she whispered. “Tell them I—” And then the light went out in her eyes.

So much for a peaceful “country-house lark.” Gemma is beside herself waiting for Duncan to show up. Detective Sergeant Doug Cullen drives down the next morning with the two boys when he hears the news of Kincaid’s accident. The dead man in the car was Fergus O’Reilly, a famous chef who Viv once worked for, “a long time ago” in London. He and the dead woman in the car ate dinner, separately, at Viv’s pub that night. Then Jack, Viv’s bartender at the village pub, is mown down by a car. These are not coincidences: somehow Chef Viv Holland’s former life in London has found her out … and her eleven-year-old daughter Grace.

Over the years, an absorbing series expands to include more people. Sometimes it’s co-workers like Melody and Doug, or in the case of A Bitter Feast, a new cast of characters in a novel environment. Lady Addy and her husband Sir Ivan are consummate hosts. Ivan’s talents will have everyone wishing for a friend/fairy-godfather/capable chap like him in their lives. Duncan is so badly hurt by the crash that he’s forced to take a back seat in the investigation and it’s Ivan who takes him in hand, chivvying him to the hospital and a host of other spots. Duncan “wondered how Ivan Talbot managed to navigate the spaces between his working-class background, newspaper baron, and country gent with such apparent ease.”

“I thought we’d have a chat with Mike Shelton,” Ivan gave Kincaid a sideways grin. “Who doesn’t golf.”

Mike Shelton, Kincaid soon learned, was Michael Shelton, Assistant Chief Constable, Operations, a slender, dark-haired main in his forties. Young for an ACC, Kincaid thought, as Shelton greeted them and shook hands warmly. He was in casual clothes rather than in uniform, and it wasn’t until Ivan said, “Thanks for taking the time to see us on a Saturday, Mike,” that Kincaid realized Ivan must have rung him and requested the meeting, probably while Kincaid was dealing with his phone.

It’s unusual to see Duncan a half-beat behind. He and Gemma are collaborators with the local cops and junior at that. Gemma reaches out for some investigatory help from London, but they don’t solve the case solo. It takes everyone noticing little things and along with observing, gauging when and when not to keep a confidence. Their oldest son Kit is an integral part of the story. He’s sensitive and intelligent, a bit of a natural at investigating.

I would be remiss if I didn’t recommend A Bitter Feast to foodies on both sides of the Atlantic. Mouths will water at the description of Chef Viv’s glorious al fresco luncheon. Murders are one thing, but the show must go on. When Addie praises Viv’s talents to the assembled guests, Viv is “flushed with pleasure.”

Even with the quirky presentation, the food, Gemma had to admit, had been divine. From the creamy, smoky trout spread, to the delicate salad with roasted pears, caramel, and a local blue cheese, to the meltingly tender lamb and white beans served in camping tins, it had been of absolute star quality.

In the acknowledgements, Crombie thanks “the staff at The Slaughters Manor House for their kindness and hospitality, and especially to Chef Nic Chappell for fabulous food, advice, and a tour of the manor house kitchen.” A Bitter Feast is a tour de force by Deborah Crombie—my only complaint is that we’ll have to wait a year or so before the next Duncan Kincaid mystery, but it’s worth it.