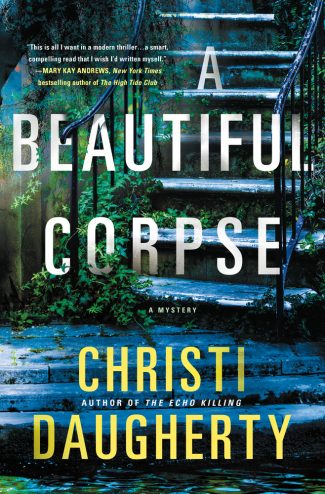 In Christi Daughtery’s A Beautiful Corpse, a young woman is found murdered, and all three suspects are men who once claimed to love her. With a familiar yet dangerous face watching her every move, Harper must unravel this mystery before it’s too late.

A Beautiful Corpse is the second book in Daugherty’s series to feature Savannah crime reporter Harper McClain, and it’s my first introduction to the plucky heroine. Harper is still feeling the sting from her high-profile takedown of a cop for murder. She loved him like a dad and now he’s serving life in prison, but she’s suffered more than just emotional fallout and a bullet to the shoulder from the incident. The cops she relies on to do her job have closed ranks and are treating her as persona non grata. The ordeal also ended her romance with handsome detective Luke Walker.

Now, she’s covering the murder of 24-year-old Naomi Scott, a law student who tended bar on the side. She’s dead from two gunshot wounds and it all happened after Naomi left the bar where she worked with Harper’s best friend Bonnie. It doesn’t look like a robbery, but who would have wanted to kill Naomi? She was a young woman who had everything going for her. But, crime fiction is littered with the bodies of beautiful young women. The difference is that not all of them had Harper McClain fighting to find their killer.

The first suspect is Naomi’s boyfriend, Wilson Shepherd, a fellow law student who doesn’t help his claims of innocence when he’s arrested while brandishing a handgun. However, Naomi’s father insists to Harper that Wilson would never harm Naomi.

“Mr. Scott,” Harper leaned forward, “isn’t it possible they had a fight and Naomi didn’t tell you because she didn’t want to upset you? And someone like Wilson, with his background, maybe his temper snapped…”

He didn’t let her finish. “Miss McClain, I know what you’re thinking but if you keep looking at Wilson you’ll be looking at the wrong man, just like the police are.” His voice trembled with frustration. “You need to find the other man. The one who scared her.”

“Fine. Tell me about the man.”

He hesitated. “Now, you’re going to think I’m a liar because I told you she told me everything. But with this man, all she said was she wanted him out of her life. Told me he wasn’t a good person and that if I ever saw him I should walk away without even talking to him.”

Harper is concerned that Mr. Scott isn’t seeing what’s right in front of him, and when he gives her the name of the man, she’s shocked. It’s a name that leads directly to one of the most powerful families in the city. In fact, their influence extends all the way to her newspaper, where the threat of layoffs constantly looms, not to mention the pressure to always get the story. But don’t worry, because Harper is more than up to the task, but she’s being bombarded from all sides. This story is hot, hot, hot, and she soon finds out that someone is following her, even breaking into her apartment. Then there’s Luke. She’s never gotten over him and she’ll have to work with him while trying to break this case.

Daugherty keeps the pace brisk, setting her breathless tale against a scorching Savannah heatwave, and Harper is ridiculously easy to root for. A truly vile killer rounds out this engrossing tale, and the author hints that something from Harper’s past—her mother’s gruesome murder when Harper was twelve—will be the focus of the next installment.