Being the Grim Reaper can be hard!

So kick back and relax with this week's Pick Your Poison—where we create a cocktail inspired by a recently published mystery, thriller, or crime novel—the “Pimm's Reaper” cocktail, inspired by Darynda Jones's 12th Charley Davidson novel, The Trouble with Twelfth Grave!

The Trouble with Twelfth Grave by Darynda Jones is the 12th book in the Charley Davidson series (available October 31, 2017).

Ever since Reyes Farrow escaped from a hell dimension in which Charley Davidson accidentally trapped him, the son of Satan has been brimstone-bent on destroying the world his heavenly Brother created. His volatile tendencies have put Charley in a bit of a pickle. But that’s not the only briny vegetable on her plate. While trying to domesticate the feral being that used to be her husband, she also has to deal with her everyday life of annoying all manner of beings—some corporeal, some not so much—as she struggles to right the wrongs of society. Only this time she’s not uncovering a murder. This time she’s covering one up.

Add to that her new occupation of keeping a startup PI venture—the indomitable mystery-solving team of Amber Kowalski and Quentin Rutherford—out of trouble and dealing with the Vatican’s inquiries into her beloved daughter, and Charley is on the brink of throwing in the towel and becoming a professional shopper. Or possibly a live mannequin. But when someone starts attacking humans who are sensitive to the supernatural world, Charley knows it’s time to let loose her razor-sharp claws. Then again, her number one suspect is the dark entity she’s loved for centuries. So the question becomes: Can she tame the unruly beast before it destroys everything she’s worked so hard to protect?

Read an excerpt from The Trouble with Twelfth Grave!

So have a few “Pimm's Reaper” cocktails and don't forget to order your copy of Darynda Jones's The Trouble with Twelfth Grave today!

Darynda Jones, the New York Times and USA Today bestselling author, won a Golden Heart and a RITA for her manuscript First Grave on the Right. A born storyteller, she grew up spinning tales of dashing damsels and heroes in distress for any unfortunate soul who happened by, annoying man and beast alike. Darynda lives in the Land of Enchantment, also known as New Mexico, with her husband and two beautiful sons, the Mighty, Mighty Jones Boys.

Parker Valentine is about to realize her dream of opening her own winery in her hometown of Boulder, Colorado. Sure her parents don’t seem enthused enough to drop in on opening day, but at least her brother Liam and his good-looking friend Reid Wallace are there to show their support—along with a decent-sized crowd of…

Eight months have passed since the events of the last installment of the Kebab Kitchen Mystery series, with nary a dead body in sight—to the relief of our heroine, Lucy Berberian. She’s had her hands full running her family’s Mediterranean restaurant, so everything else has been on the backburner, including looking for a new apartment…

Cooking the Books: One Feta In the Grave by Tina Kashian

The third in the Kebab Kitchen Mystery series is another page-turning culinary cozy, as summer festivities in Ocean Crest, New Jersey, are interrupted by murder. Our heroine, Lucy Berberian, is the manager of her family’s Mediterranean restaurant but has taken on the task of helping to organize the food and beverage portion of Ocean Crest’s… 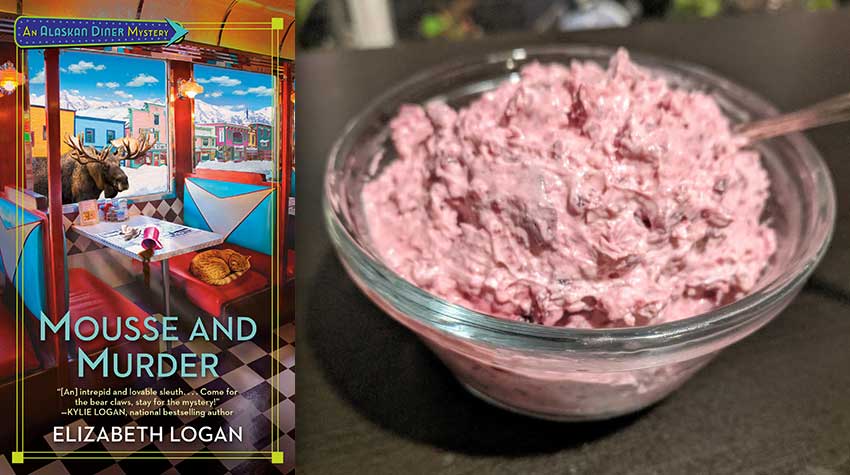 Cooking the Books: Mousse and Murder by Elizabeth Logan

Charlotte “Charlie” Cooke has been running the Bear Claw Diner in Elkview, Alaska, for over a year now after her mother, the diner’s original owner-operator, decided she wanted to retire and travel the world with her husband, Charlie’s dad. Now that Charlie’s settled into a good groove with both the diner and her cat—the delightfully…