But they should have no problem with this week's Pick Your Poison—where we create a cocktail inspired by a recently published mystery, thriller, or crime novel—the “Gulls' Night” cocktail, inspired by Donna Andrews's 21st Meg Langslow Mystery, Gone Gull! 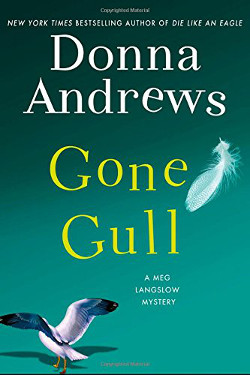 Meg is spending the summer at the Biscuit Mountain Craft Center, helping her grandmother Cordelia run the studios. But someone is committing acts of vandalism, threatening to ruin the newly-opened center’s reputation. Is it the work of a rival center? Have the developers who want to build a resort atop Biscuit Mountain found a new tactic to pressure Cordelia into selling? Or is the real target Meg’s grandfather, who points out that any number of environmentally irresponsible people and organizations could have it in for him?

While Meg is trying to track down the vandal, her grandfather is more interested in locating a rare gull. Their missions collide when a body is found in one of the classrooms. Can Meg identify the vandal and the murderer in time to save the center’s name―while helping her grandfather track down and rescue his beloved gulls?

Read an excerpt from Gone Gull! 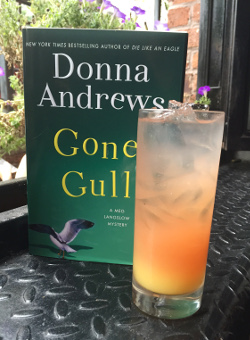 So have a few “Gull Party” cocktails, and don't forget to order your copy of Donna Andrews's Gone Gull today!

Donna Andrews is a winner of the Agatha, Anthony, and Barry Awards, a Romantic Times Award for best first novel, and four Lefty and two Toby Bromberg awards for funniest mystery. She is a member of MWA, Sisters in Crime, and the Private Investigators and Security Association. Andrews lives in Reston, Virginia. Gone Gull is Andrews's the 21st mystery in the Meg Langslow series.

Yale Yee lives an unusual life for a modern 30-year-old. Eschewing cell phone, personal computer, or car, she works in a bookstore near where she lives and pines for the simpler days of old—at least until her bosses can no longer afford to keep employing her. With ample free time now, she reluctantly agrees to…

Sarah Blair is a little skeptical when her mother—who insists on being called Maybelle even by her own daughters—enters a reality TV show competition for Southern Belle brides to be. Her eyebrows rise even further when Maybelle tells her that she’s needed on set as her mother’s chaperone, in the grand Southern tradition of decorous,…