Bones usually has catchy tunes playing on its soundtrack every week but if there’s one song to convey season six’s entire arc, it’d have to be David Bowie’s “Changes,” because that’s exactly what almost every character experienced this past year.  Maybe the creators had that earworm, too, because the season finale was titled “The Change in the Game.”  Watch here at Fox if you haven't seen it yet, because we're spoiling to discuss it.

Beginning with Season 6 recap. The season began with FBI Agent Seeley Booth (David Boreanaz) and Dr. Temperance Brennan (Emily Deschanel) overseas, with him chasing insurgents in Afghanistan, and Brennan in Maluku looking for the possible missing link in man’s evolution. Caroline Julian called them home and reassembled the Jeffersonian forensic team by the end of the first ep, but not before we found out that Angela (Michaela Conlin) was pregnant with a kid by Hodgins (TJ Thyne), the squints had scattered, and Sweets (John Francis Daley) decided to break off his engagement to Daisy Wick (Carla Gallo) since she went to Maluku with Brennan.

Burley Brings Bawling? Most significantly, Booth had a serious girlfriend in Hannah Burley, a war correspondent he met in Afghanistan.  I’m glad the producers made Hannah and Brennan friends, since it would’ve been a giant cliché to have them fighting over Booth, but Hannah was never fully fleshed out as a character. Katheryn Winnick, who portrayed Hannah, has turned in mesmerizing performances elsewhere but here, she wasn’t given a lot of layers to play. We saw that she was smart and ambitious, but viewers weren’t shown much else about what made her tick. She was almost too perfect. Despite being a little nervous about meeting Booth’s son, Parker, for example, she won him over with one conversation.

Perhaps Hannah was meant more as a device to make Brennan rethink her life choices. In episode 9 of this season, Bones worked on the case of a doctor who seemingly lived a life dedicated to her work.  No one seemed to notice when she died. The case rattled Brennan because she saw herself in the victim. After solving the mystery, she told Booth she made a mistake when she rejected his profession of love to her last season. But Booth said he had moved on and now loved Hannah, causing Bones to cry, a rare moment of vulnerability for her.

Broadsky's Betrayal. Before they could all move on, some old business had to be settled first. In episode 11, the Grave Digger was brought to the courthouse for her final appeal when her head suddenly exploded from sniper fire. I expected it to happen because it was teased the previous week, but its graphic nature was still shocking. And poor Sweets, who was standing near the Digger, got splattered with her brains and matter. Yeccccch.

Booth knew there was only a handful of people who could have made that kill shot, and eventually determined it was his old Army friend and mentor, Jacob Broadsky. (What’s with all the “B” surnames on this show?) Broadsky had apparently turned vigilante, assassinating bad people for money. Booth and Broadsky had a showdown, but Booth couldn’t take the shot when he had a chance, and Broadsky got away. Since producers cast the intimidating film actor Arnold Vosloo as Broadsky, it was obvious he would be the next villain granted a multi-episode arc, one that would get very personal for Booth.

Bros Buying Bling. Also personal is Booth's spontaneous decision to propose to Hannah while out drinking with Sweets. Sweets said he didn’t want to end up at Booth’s age and still be unmarried, so he would propose to Daisy again. Not wanting to be shown up, Booth said he was already planning to do the same to Hannah. The two went ring shopping and Booth bought a giant whopper while Sweets backed down, realizing he wasn’t ready.

When Booth popped the question, Hannah freaked out a little, saying she wasn’t the marrying kind, but that she loved him and wanted things back the way they were. Booth got mad, made clear that wasn’t going to happen, and threw the ring into the river after Hannah left.

I know I was supposed to feel sorry for Booth since he kept getting rejected by the women he loves, but I couldn’t drag up much sympathy here. His decision to propose was more a reaction to what Sweets said about Booth never having married; it wasn’t based on any real discussion Booth and Hannah had about marriage. In fact, she had made it pretty clear she wasn’t looking to get married, so it’s his own fault for not listening to her.

And why did he throw away that expensive ring he couldn’t afford?? He’s a government worker, not Donald Trump! Couldn’t he at least try to return or pawn it? I hate it when people on TV and in movies throw or break valuable things when they’re mad. That ring looked like it cost $20,000 or more and I’ve never seen anyone just throw away that kind of money in real life.

Booth's Boozy Bargain. Anyway, Booth ended up getting drunk at the Founding Fathers, rambling about why no woman seems to want what he was offering. He gave Bones an ultimatum. She could stay, have a drink, and be his friend, or leave and he’d find another partner for her the next morning. Of course she stayed, but it looked like there would be no flirting between them for some time.

The two did get stuck in an elevator in episode 16, during which time they discussed their relationship. Brennan thought they’d be great in bed, since they’re both physical people with excellent stamina. It’s the out-of-bed parts that she thought would give them trouble. At the end of the episode, they each wrote down the date when they thought they might be ready to get together and then they burned the sheets of paper, releasing them as wishes into the universe.

Bullets for Brainiacs. Back at work, Booth finally captured Broadsky, but not before the latter took out Vincent Nigel-Murray  in the lab with a bullet intended for Booth. Vincent Nigel-Murray's death was sad, but not shocking since it was leaked back in January that a squintern would die from sniper fire, and producers made no mystery of the fact a significant character would perish in this season’s penultimate episode. When Ryan Cartwright’s name appeared during the opening credits last week, I knew Vincent was a goner.

B&B in Bed. Vincent's death caused Brennan to crawl into Booth’s bed and cry, and it was implied that maybe something more happened. (See this post for more discussion of 4:47) I didn’t buy it, because I thought B&B consummating their relationship would be a huge moment that producers would milk. (That might’ve come out dirtier than I intended.)

Well, last night’s finale proved me WRONG. But I’m rather glad for it. I’m not a B&B ‘shipper. I don’t care whether or not they hook up; I just hate being jerked around. Thankfully, in this interview with TVLine, executive producer (and the finale’s co-writer) Stephen Nathan says last night’s cliffhanger was not a bait-and-switch and that Brennan and Booth definitely had sex after Vincent’s death. (Speaking of the deceased squintern, it was a nice touch to have Angela and Hodgins use Vincent for one of their baby Michael’s middle names.) Buck and Wanda and Bowling.  Oh yeah, Babies!  Other than that last-minute revelation, the finale was a snooze.

It was about thirty minutes of bowling, ten of Angela screaming in labor, and maybe two of Brennan delivering her news, which wasn’t that surprising considering how Emily Deschanel looked pregnant throughout the episode (the actress announced her pregnancy in March).

My first reaction to the ending was “Huh?” but after reading Nathan’s comments, I think it might be better for Booth and Brennan to skip past all the gooey dating stuff, and go straight to a situation that will certainly be rife with a different kind of tension.

What did you think?

Elyse is a freelance writer/editor who likes soup and the Bee Gees, but doesn’t enjoy piña coladas or getting caught in the rain. She also blogs at Pop Culture Nerd and tweets as @popculturenerd. 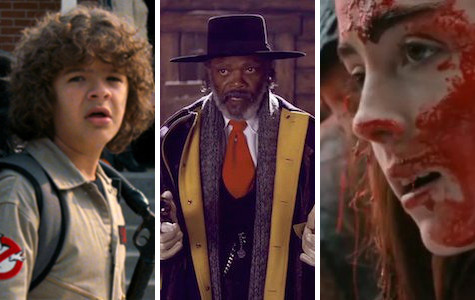 Crime/Mystery/Thrillers Coming to (and Leaving) Netflix in October 2017

Highlighted by the highly anticipated second season of Stranger Things, October is also bringing a few horror films and a lot of new Netflix Originals! Add in some classic movies and a few true crime documentaries, and October might become synonymous with binge watching. See what other crime/mystery/thriller entertainment is coming to (and leaving) Netflix…

The Westworld creators have certainly kept their cards close to their vests, keeping us guessing for most of the season while adding plenty of teaser tidbits along the way that, when all put in place, cause you look back and say, “Oh yeah, that makes sense.” It was all right in front of us the… Crime/Mystery/Thrillers Coming to (and Leaving) Netflix in September 2016

After an admittedly tepid August, September comes out swinging with a superb list of newly added movies—including the entire Jaws series to help you live every week like it's shark week. Then, Wagner Moura gives you the bump you need to stay up all night and binge-watch Season 2 of Narcos, with his chilling portrayal…

Heroes traveling through time to save the world from destruction! Go!            No, not the premiere of DC’s Legends of Tomorrow. I’m talking about the finale of the Heroes Reborn miniseries, which aired in the same time slot as DC’s newest superhero show. There has been a lot of hype about…