Celebrating Boekenweek with Kristien Hemmerechts, Author of The Woman Who Fed the Dogs 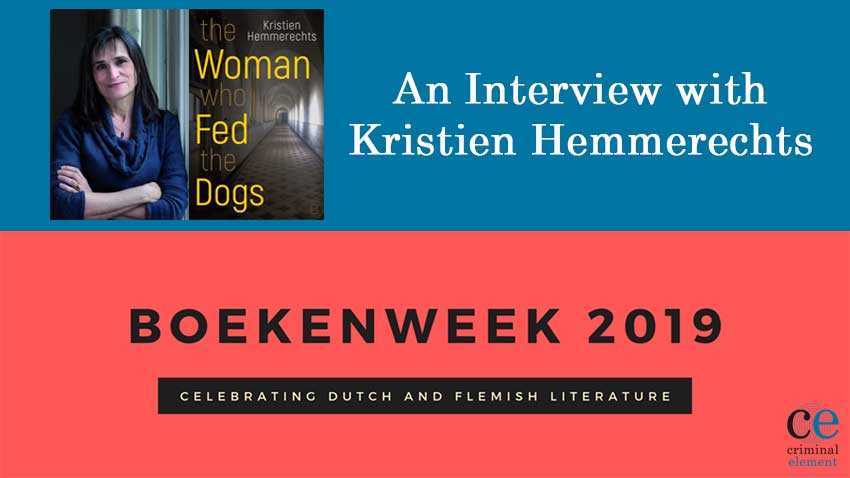 To help celebrate, Criminal Element has partnered with World Editions to bring you an exclusive interview with Kristien Hemmerechts, author of The Woman Who Fed the Dogs. Comment for a chance to win a copy!

In the Netherlands and Belgium, Boekenweek (Book Week) is an annual celebration of literature, happening every Spring since 1932. During the festivities, events are held across each country, including book signings, readings, and panel discussions. Boekenweek is always kicked off with the “book ball,” an event attended by writers and publishers alike. 2019 marks the 84th annual Boekenweek.

Joining me is Kristien Hemmerechts. Kristien’s extensive career includes more than twenty novels and numerous collections of short stories and autobiographical essays. Never one to shy away from controversy, Kristien is known for her forthright opinions on social issues. She teaches Creative Writing at the Catholic University of Leuven and The Drama School of Antwerp. She has been awarded the Flemish State Prize and the Frans Kellendonk prize for her entire oeuvre.

Today, we’ll be discussing her novel The Woman Who Fed the Dogs, a novel with a simple yet chilling premise: it inhabits teh mind, heart, and voice of Belgium’s “most hated woman.” Or, as the flap copy describes it, Medea meets Dexter.

Odette, the hated eponymous character, sits in her prison cell preparing for her release, and with nothing but time, she naturally begins to reflect on her former life. A life before she was the source of an entire country’s ire. She not remorseful, rather simply reflective and fanatical. Throughout the book, Odette untangles her controversial past, leaving the reader to alternate between gasps and concern. To say any more would be to spoil the read, but what I will say is that Hemmerechts based the book on the real-life events of Michelle Martin, the ex-wife of a notorious child abductor, murderer, and serial rapist. As you can tell, this is a deeply graphic, and often uncensored, story, and you will be shocked and disgusted more than once. But to Hemmerechts’ credit (and to the translator, Paul Vincent), the book is captivating. You won’t like what you’re reading about, but you will keep reading. And that’s the mark of a top-notch writer.

So now, without further ado, let’s welcome Kristien Hemmerechts. She was kind enough to take some time to answer my questions. Join us as we discuss her book, as well as Dutch and Flemish crime fiction, plus, naturally, Agatha Christie. And make sure to comment below to enter for a chance to win a copy of Kristien’s novel. Enjoy!

Joe Brosnan: Thanks for joining us, Kristien. Criminal Element is all about crime fiction, and our readers love a great mystery or a memorable villain. In your case, The Woman who Fed the Dogs definitely delivers on the latter. Can you introduce Odette, the “most hated woman in Belgium?”

Kristien Hemmerechts: Odette doesn’t think of herself as a criminal. She’s mystified by people’s virulent hatred of her. She obsessively thinks about women who have murdered their own children, and compares herself favorably to them. As far as she’s concerned, she has no blood on her hands. Odette is a woman in denial. She denied the presence of the children in the cellar, she denied her responsibility and she denied her share in their death.

JB: Odette is based on Michelle Martin, the ex-wife of the notorious child abductor, murderer, and serial rapist Marc Dutroux. What sort of undertaking was it to write inside the mind of such a tragic and polarizing character?

KH: To my surprise, it wasn’t all that hard. Before I embarked on the project I thought of her as a thoroughly evil person, some kind of monster. The more I read about her, the more she struck me as totally ordinary. On top of that, I discovered that we grew up in the same area, and we belong to the same generation. She met Dutroux at the Brussels ice skating rink where I used to go and skate myself. She was almost literally the girl next door. I could easily find her voice and also her mother’s. There was something stifling about growing up in that area, so I could relate to her desire to escape from under her mother’s thumb. Unfortunately, I’ve known women in destructive relationships. I’ve witnessed their inability to leave the abusive partner, their twisted feelings. Michelle Martin was and is unexceptional. The circumstances in which she found herself became increasingly exceptional and the outcome of them was, but she herself wasn’t in any way.

JB: When it comes to crime fiction, who are some of your favorite authors to read?

KH: I used to read a lot of Agatha Christie because my English teacher said it was perfect to improve my English, and he proved right. I also read quite a bit of Maigret stories by Georges Simenon, mainly because my mother’s a great fan, so we had quite a collection in the house where I grew up. There was a time when I read Raymond Chandler because of the archetypal portrayal of gender roles. He offers wonderful material for exposing and analyzing role patterns and stereotypes. I haven’t read any recent crime fiction. Maybe I should take it up.

JB: Who are some Dutch and Flemish crime fiction authors that you’d like to see more people reading?

KH: Crime fiction is very popular where I live, and quite a lot of people try their hand at it. I’ve been told that Charles den Tex is really good, but I haven’t read him. He’s Dutch, incidentally, not Belgian.

JB: And what about Dutch and Flemish TV? What criminal offerings we should be queuing to binge next?

KH: Tabula Rasa was a popular crime fiction series here. It’s been sold to channels abroad, so yes, American audiences may be able to watch it. It was rather clever, and well made.

JB: If you were in trouble and had to hire one fictional detective, who would you choose?

KH: Without any doubt or hesitation Hercule Poirot, my fictional compatriot.

JB: What is next for you? What are you currently working on?

KH: I never discuss work in progress, for a variety of reasons, one of them being fear of having the idea stolen, the other being fear of loss of purpose. If and when I can talk about a story or an issue, why would I bother to write about it? It’s all due to superstition, but then, there you are.

Thank you to Kristien for answering our questions, and make sure you’re following World Editions for all of their Boekenweek celebrations! You can track their blog tour here.

Comment below for a chance to win a copy of The Woman Who Fed the Dogs by Kristien Hemmerechts!

The Woman Who Fed the Dogs Comment Sweepstakes: NO PURCHASE NECESSARY TO ENTER OR WIN.  A purchase does not improve your chances of winning.  Sweepstakes open to legal residents of 50 United States, D.C., and Canada (excluding Quebec), who are 18 years or older as of the date of entry.  To enter, complete the “Post a Comment” entry at https://www.criminalelement.com/boekenweek-kristien-hemmerechts beginning at 9:00 a.m. Eastern Time (ET) March 23, 2019. Sweepstakes ends at 8:59 a.m. ET April 6, 2019. Void outside the United States and Canada and where prohibited by law. Please see full details and official rules here. Sponsor: Macmillan, 175 Fifth Ave., New York, NY 10010.