Bel of the Brawl by Maggie McConnon is the 2nd book in the Bel McGrath Mysteries series (available March 7, 2017).

Bel McGrath loves her work as a wedding chef. But with her latest event set to take place at Shamrock Manor, she just can’t seem to catch a break. The Casey wedding has left her with ten thousand greenbacks in the hole, a missing staff member, and a dead groom. Now, in between Guinness beers and pub brawls, Bel must find a way to crack the case—even though what she should be cracking are eggs into the batter of the wedding cake. A good Irish girl’s work is never done…

What begins as local town fodder for an episode of “Wedding Gone Wild” is turning into “Gangsters with Guns.” With the Casey family spiraling out of control, and billable McGrath hours being lost by the minute, Bel is definitely in too deep. With all these shenanigans, she barely has time to obsess over her new boyfriend and her own unsolved mystery from years ago! Time is running out on getting the next couple down the aisle before the so-called luck of the Irish takes a deadly turn…

When we were kids, we used to say that if heaven did indeed exist on earth, it had taken the form of Eden Island.

Set in the middle of the Foster’s Landing River, a little tributary that flowed into the mighty Hudson, it was lush and green with spongy ground cover that protected the ecosystem below its surface. My friends and I knew the island well, had walked every inch of its pristine landscape, taking great care to remove the dead cigarette butts and empty cans from overnight expeditions that the local police department turned a blind eye to, mostly because they themselves—homegrown all—had spent a night or two there looking up at the stars, a little buzzed, marveling at both the good luck and the horrible misfortune they had to be growing up in a river town like Foster’s Landing with everything and nothing to offer.

It had rained a lot the year I graduated from high school, so much so that Eden Island was the only one in the little cluster of islands still aboveground that year, but even there the water was creeping over the island’s banks, closing over the edges of the little land mass, making its way toward the trees that sat in the center like a copse of sentries protecting their territory.

That early summer morning years ago, not long after our high school graduation, followed a night fuzzily remembered at best, when I was still a teen who forgot to wear sunscreen (much to my mother’s chagrin), was always covered in bug bites, and wore a bathing suit under my clothes most of the time. That morning I woke up and turned onto my side, surprised to find myself outside and exposed to the elements. I could hear a little rumble of thunder in the distance and feel a light rain falling between the hanging leaves, the ones so low I could almost touch them. The moss beneath my cheek was cold and damp and provided a soft cushion for my throbbing head. My sweatshirt—FOSTER’S LANDING HIGH SCHOOL SWIM TEAM—was soaked through. I sat up, feeling the back of my head for a wound that I was sure was there but found nothing; this pain was just a result of having slept outside and having had maybe a go or two at the keg that some older kid had brought. This time, my usual go-to, a plate of greasy diner eggs and sausage, wouldn’t allay the queasiness that the briny smell of the small river brought to my nose, nor the shakiness in my legs.

I looked around, alone in familiar surroundings but with a feeling of dread spreading icy tendrils through my limbs. “Hello!” I called out, wondering about the whereabouts of the rest of the usual quartet that accompanied me everywhere—Amy, Kevin, Cargan. The island wasn’t big, maybe six hundred feet across, an eighth of a mile long, and a quick check of the perimeter on all sides told me that I was alone.

In those days, I wore Keds that were always threadbare, having been white and clean for about a week before my pinkie toe started to peek out from first the right one, then the left. They were beside me, soggy and soiled. I searched the pockets of my cutoffs and found a damp dollar bill and the key to my house but nothing else. I looked out across the northern edge of the island and stuck a tentative toe into the water: high tide. The water barely came up to my knees when I waded in, and determined to get home before the real rain came, the thunder rolling and rumbling closer to the spot where I stood, I strode across the expanse toward the other shore.

From the trees behind me, I imagined a rebuke. “Where you going, Bel?” they seemed to ask as they swayed and rocked in the wind, getting increasingly violent as the thunder reverberated, this time a little closer. I waded in deeper, my sneakers skidding and slipping on the rocks below. “Where you going, Bel?” the trees seemed to ask again, their cadence not unlike Kevin’s when he’d asked me the same question the night before, the one that was buried in the deep recesses of my brain. Where I was, why he had asked, and where I had been going were all questions I couldn’t answer. A thought went through my clogged brain, the synapses firing slowly but, in this case, deliberately.

I have to say I’m sorry, I thought, for the first, but not last, time.

The water was cold, colder than it should have been for June. It was all that rain making it chilly, bracing. Up to my thighs now, the water rushed from Sperry’s Pond to the north, where rapids had stranded more than one overly brave kayaker out for a relaxing paddle on a gorgeous summer day, the kind of summer days that normally I lived for. I waded closer to the shore, turning back once to make sure I really had been alone on the island. My addled mind was playing tricks on me, and a place I loved was quickly turning into somewhere sinister and foreboding, a place that I needed to escape.

Finally, because it was easier, I began to swim, short strokes while bent at the waist, the current getting stronger, the wind picking up. The shore, which always seemed so close when I was on the island with my friends, seemed far away now that I was alone. Unreachable. I pushed through the water, my legs—short but swimmer’s legs nonetheless—doing the work, my arms splashing at the water but really not helping my progress across the expanse. I pulled off my sweatshirt, noticing a purple handprint around my right bicep and Kevin’s words as he caught me as I stumbled out of my kayak yesterday—“That’ll leave a mark!”—ringing in my ears.

Where was everyone? Most importantly, where was Amy? I had left my best friend on the shore the night before, telling her she would be sorry and that I would never speak to her again, but a night on the beach, alone and wet, had convinced me that I had overreacted, that it hadn’t been as bad as I thought. Maybe she hadn’t looked at me the way I thought she had after kissing Kevin—my boyfriend—right in front of me. But the truth was that she had. I held on to the hope that Amy never would have ended the night without finding me first. We were a team. A duo. We were never apart.

When I finally reached the shore, out of breath and soaked to the skin, a clap of thunder exploded directly overhead and the spot where I had lain just moments earlier was struck by a bolt of lightning so thick and sustained that I knew I would have been killed had I not awoken when I had. Something had roused me; I had no internal clock. Anyone who had seen the number of tardy markings on my report would know that I was never on time, ever. I looked back across at Eden Island, squeezing the water out of my sweatshirt and putting it back over my head.

Where am I going? I wondered.

I decided I didn’t know.

I lay on the shore, looking at the murky sky overhead. It would be raining steadily soon but it didn’t matter; I was already wet. Behind me, footsteps approached but I was too tired to be wary. The person crouched by my head and held out a hand.

“Ready to go home, Bel?” my brother asked, the sight of him bringing tears to my eyes.

“I had a horrible night, Cargan.”

He had, too; he had been up all night. It was written on his face.

“I know,” he said. “Let’s go. Mom and Dad are worried sick. We’ve been looking for you for hours.”

He shook his head, his dark hair wet and flopping onto his forehead. “No. You weren’t.” He leaned over and hugged me, and the sound of a great sob—his or mine, I wasn’t sure—disappeared in the latest clap of thunder. Over his shoulder, I spotted my other brothers—Arney, Derry, and Feeney—clamoring down the hill behind the Caseys’ house toward the river, their voices loud and raucous, excited. I had been found.

In the distance, there were sirens and voices, coming together in a panic-filled cacophony. I looked at my brothers for the answer to the unspoken question, the worry on Cargan’s face in particular still there in spite of the fact that I had been found.

Only Cargan spoke. “We found you.”

There was something more, something ominous. It was written on his face.

One tear slid down his face. “But Amy Mitchell never came home.”

It was a long time ago and I was a lot younger. Today, I sat at the edge of the water by Shamrock Manor, my parents’ catering hall, and looked out, hoping that I would see her again. I knew I wouldn’t; in my heart of hearts, I knew she was dead.

But still, all these years later, she was my sister from another mother, my confidante, my best friend. She was Amy Mitchell, the girl who never came home.

Take a visual tour of Bel of the Brawl with GIFnotes!

Maggie McConnon grew up in New York immersed in Irish culture and tradition. A former Irish stepdancer, she was surrounded by a family of Irish musicians who still play at family gatherings. She credits her Irish grandparents with providing the stories of their homeland and their extended families as the basis for the stories she tells in her Belfast McGrath novels. 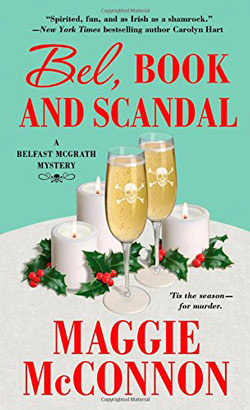 Maggie McConnon rings in Christmas in Bel, Book, and Scandal—the third adventure for everybody’s favorite Irish-American culinary artist turned amateur sleuth, Bel McGrath (available December 5, 2017). Take a visual tour through Bel, Book, and Scandal with GIFnotes! Belfast McGrath is a no-nonsense kind of gal. Irish down to her dark red curls, she is…

Every Wednesday, we here at Criminal Element will put together a list of Staff Picks of the books that published the day before—sharing the ones that we are looking forward to reading the most! This week, the first book in a new series from Nora Roberts and the second Icelandic procedural from Ragnar Jonasson highlight…

What do you do when your best friend—who you thought disappeared—suddenly shows up in a picture in the newspaper?  Investigate, of course. But not before having a few of this week's Pick Your Poison—where we create a cocktail inspired by a recently published mystery, thriller, or crime novel—the “Bellini, Book, and Scandal” cocktail, inspired by…