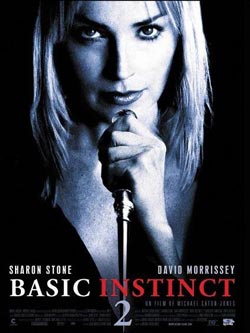 I was ONLY going to watch the horrid, legendary, Razzie-winner, Basic Instinct 2. However, after viewing the movie, I was compelled to go back and watch the orginal Basic Instinct along with it.

Why, you may ask?

Well, even though I knew for sure that B.I.2 was total crap, I needed the original to really drive home the fact of how completely and UTTERLY bad B.I.2 really is. And trust me, it is. It’s amazing that it even exists.

Let us start at the beginning. What is the premise of Basic Itstink Deux?

Catherine Tramell (Sharon Stone, reprising the role that made her vag . . .er, made her famous) is now in merry ol’ England. London is a rockin’ place from the get-go because we open with Catherine roaring through the town in a Porsche, some drugged out soccer star in the passenger seat (and for some strange reason, she’s driving an AMERICAN Porsche). You’d think she’d be driving in the RIGHT seat not the left one, but whatever.) She’s topping 110mph through town, and grabs the dude’s hand and proceeds to play rock paper scissors with his fingers and her woo woo. Of course she goes over the edge as the Porsche goes over the edge and right into the Thames. Her seatbelt works, his does not. She survives, the guy does not. And you have to wonder if this was like a Hitchcock moment where the director, Michael Caton-Jones, said to writers Leora Barish and Henry Bean, “I want to see a Porsche blast through a wall and fly through the air and crash into the Thames! Make it fit somehow!”

Anyway, so Catherine is arrested for the guy’s murder but let off pending a psychiatric eval. Enter our protagonist, Doctor Michael Glass (played by David Morrisey). Of course Glass is edgy, and has had a past case go horribly bad. Sound familiar? Well, it should because it’s basically Michael Douglas’s character from Basic Instinct. The dynamic is basically the same, too. Glass, of course, falls for Catherine and gets caught in her web of lies and psychological warfare. You may be wondering why I mentioned the original film earlier? Well, as I was watching the sequel, I was more and more struck by this feeling of déjà vu and it took me a moment to hit on the reason why. It’s because really this sequel is, at its core, a series of barely connected scenes all arranged around scenes set up for the SOLE REASON of having Catherine interviewed in some way, shape, or form. Yup, the exact same dynamic as the famous interview scene in the first movie. All the writers could come up with (or maybe it was all Sharon Stone would agree to) were to repeat, ad nauseum, the same scene where she either interviews the guy or is interviewed by the guy. They even give us a crotch scene, pathetically trying to mirror that one infamous shot.

I went to see if I could find some memorable quotes from this flaccid piece of celluloid, and while there were quotes, they were NOT memorable. I mean, look at this dog. This is the best they could come up with?! Catherine: “You know how some guys are into blondes, and some guys are into killers?”

There is ONE sequence that is really the epitome of how idiotic this film is. Our dear psychiatrist trails Catherine one night as he’s already becoming obsessed with her (and yes, there is a DIRECT copy of the “displaced sexual desire” scene from the first one where Michael Douglas’s character has rough sex with his ex-girlfriend because he’s already falling for Catherine. In THIS film, our psychiatrist has this type of displaced sexual aggression sex not once, but TWICE! (Guess they had to fill time.) Then he trails her to some seedy part of London where she finds some young, tough prostitute dude and pays him for sex. But our hero does not really know what’s really going on and all HE sees is the young tough grab her and drag her through a dark doorway. Our hero charges forward, immediately finding himself in a maze of hallways and red lights as the building is some sort of BDSM brothel. And strangely, he loses ALL sight of Catherine and her boy toy and ends up on the roof of the building, yelling her name. But wait! He spies a large skylight with lurid, green light emanating out. He walks over there and what does he see?

But then again, this is a stupid movie. Plain and simple, it was a money grab by Stone. That’s painfully obvious from the opening scene to the horrid ending where they try to set up a, as yet (thankfully), un-filmed third installment.

And to make things even WORSE? Catherine Tramell is a crap writer, pure and simple. Avoid this movie at all costs.

See other offenders in our Crimes Against Film series.

Robert Lewis grew up under the pier at Venice Beach, California. There, by firelight, he would entertain the stray dogs with weird and wonderful tales. He’s still telling stories, but now he lives in a place with walls, a roof, and cases of red wine. Crime fiction and blues guitar are his things. He blogs over at NeedleCity, and twits sporadically and nonsensically as @robertklewis.