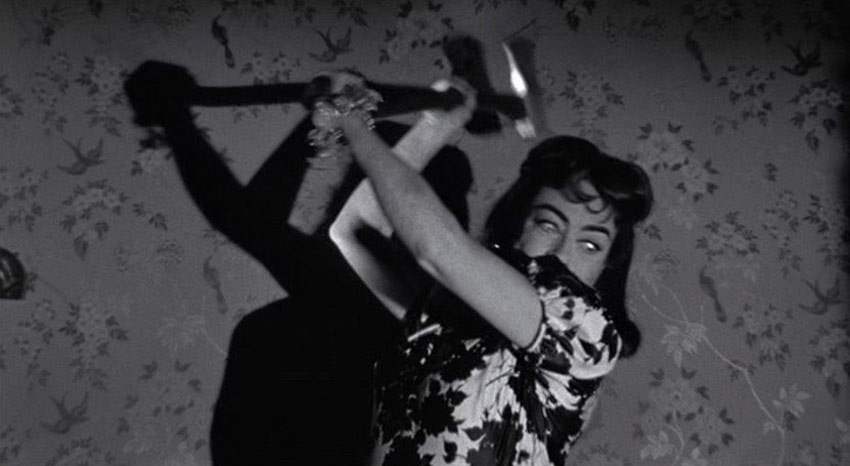 There were two Joan Crawfords (1904-77). One was an esteemed actress who showed off her considerable skills as a thespian in classic movies such as Mildred Pierce (1945) and Whatever Happened to Baby Jane? (1962). The other was the “Mommy Dearest” head case who was known to be an exceptionally difficult person with mad mental issues. The 1964 cult-classic ax-murder movie Strait-Jacket—in which Crawford plays the lead role—touches on each of her dual identities: it allowed her to display her acting talent as she played someone who is psychologically disturbed. Shout! Factory’s Scream Factory subsidiary has issued a new BluRay edition of Strait-Jacket, which gives us an excuse to take a fresh look at a peculiar and notable late-career performance by Crawford.

Strait-Jacket was produced and directed by William Castle (1914-77), a man who was known as much for being a gimmick-happy carnival barker as for being a filmmaker. Castle, for whom John Waters has expressed great admiration, wasn’t content to just produce and/or direct feature films and release them for public viewing. He went the extra step(s) in promoting and enhancing the movies in which he was involved. He employed a variety of outrageous promotional stunts over the days leading up to the releases of some of his films. And he had a tendency to get theaters to install certain props that were meant to augment audiences’ experiences in taking in these features. Castle, who churned out a ton of low-budget B-movies, also produced or co-produced critically revered titles such as Orson Welles’s The Lady from Shanghai (1947) and Roman Polanski’s Rosemary’s Baby (1968).

The screenplay for Strait-Jacket was an original story penned by Robert Bloch, who is best known as the author of the novel behind Hitchcock’s film Psycho (1960). Strait-Jacket is a macabre horror tale that, in different ways, brings to mind both Psycho and the aforementioned What Ever Happened to Baby Jane?. Crawford portrays Lucy Harbin, a woman who—when she was a youngish bride and mother—came home unexpectedly early from a trip to discover her husband in bed with another woman, with the couple’s young daughter awake in the next room. In a shocking scene, especially coming so early in the film, Lucy takes an ax to her cheating spouse (who’s played by an uncredited Lee “The Six-Million Dollar Man” Majors) and his booty-call partner. Lucy is later determined to be criminally insane and sent off to a sanitarium for people with such maladies.

Fast-forward 20 years, and Lucy’s daughter Carol—now in her 20s and living on a chicken farm with an uncle and aunt—wants to bring Lucy into their home and attempt to re-acclimate her to life on the outside of the sanitarium. The authorities are ok with this plan, and a very cautious and fragile Lucy joins the clan (the uncle is her own brother) on the farm. She is introduced to the up-and-coming young man who hopes to become Carol’s husband. She gets nice clothes and a flattering wig. All shepherded by the hopeful Carol, Lucy tries being a normal, functioning person and family member. But disturbing things keep happening, like Lucy hearing local children taunting her and finding models of severed heads in her bed. And then, people in Lucy’s vicinity start dying, and you can have three guesses as to what kills them.

The big question with Strait-Jacket is whether it should be considered a serious A-level movie or campy exploitation fare. This matter is discussed by a few film scholars and co-star Diane Baker (she played Carol) in a mini-documentary about the making of the movie, which is part of Scream Factory’s bonus-features package. The picture was produced and directed by an ostentatious showman who was known for making B-movies. Some of its special effects and lines are over-the-top to the point where they can make a viewer giggle rather than induce the intended fear or suspense. Crawford’s character looks foolishly grotesque at times. But the movie can’t be easily dismissed as camp fare. Bloch’s story is hard to believe yet genuinely scary for the most part. Crawford’s acting is close to being Oscar-worthy, and the supporting cast puts on strong performances. And while Lucy Harbin is, at times, a laughably cartoonish film character, so is Norman Bates from Psycho and Bette Davis’s character in What Ever Happened to Baby Jane?. The truth is, Strait-Jacket is somewhere between being an A- or B-movie. And that accounts for some of its lasting charm and uniqueness—that it’s undefinable to an extent.

Speaking of the bonus segments that come with this BluRay; they’re all worth watching. There are six or seven pieces, and you can absorb all of them in less than an hour. Just don’t check out the “Battle Ax” mini-documentary before watching the film for the first time, as it contains spoilers. The overall takeaway one acquires after seeing all the bonus features is that Strait-Jacket was as much Joan Crawford’s movie as it was William Castle’s. Crawford was an uncredited co-director who made casting decisions, told the other actors how to play their parts, decided what props could appear on the sets, and personally orchestrated some of the publicity events to promote the film. She was a diva who bossed everybody around. But Strait-Jacket wouldn’t be the keeper that it is if she hadn’t been part of it.