Are You Paying Attention?

🚨BONUS: Sign-in and comment on this post to enter for a chance to win a copy of Deep Into the Dark!

I’m that weirdo you occasionally see at an airport gate or in a waiting room; totally anomalous because I’m not a lonely planet orbiting around my digital sun. You can’t even see evidence of a digital sun on my person, which makes me rarer than a unicorn and appreciably suspicious. Of course, you might not notice me at all because I’m not as spellbinding as what’s on your device’s screen. But if you happen to be paying attention (kudos if you are), you’re intrigued by how alert I am while doing absolutely nothing. You might wonder if I’m a sky marshal, a stalker, or—if you’re delinquent on that loan you took out in an alley after last call—a mob enforcer. If this is the track your mind takes, you and I have a lot in common.

I’m none of those things (though if I was, I couldn’t admit it.) I’m just a writer, watching you. Creating multiple scenarios about you and your life that might spark an idea for a novel. You might be a sky marshal or stalker or mob enforcer. You have secrets and I want to know what they are. No need to tell me, I’ll fill in the blanks. As my dearly departed mother and writing partner PJ was fond of saying: ‘We get to make stuff up for a living, how great is that?’ She was absolutely right. Making stuff up is great. It’s the best one-person party game ever and a thrill that never gets old. Truly, you can’t find anything online as entertaining as your own imagination. Try it sometime, you will be amazed. This is not only how I write, but one of the reasons why I write.

I’ve always been this way (you wouldn’t believe the double life my kindergarten teacher led.) Consequently, I have never been bored in my life. Except for the time my father took me to a kabuki performance when I was ten. I used to wonder why such highly stylized theater put me to sleep, but I’ve figured out it was sensory overload. My own imagination is more inclined to subtlety and it couldn’t compete with the clamor on stage.

A writer’s first job is to be a sponge, and there is inspiration everywhere, even in the most mundane occurrences of daily life. You have to immerse yourself entirely in your surroundings in order to craft and tell a story. That means putting the electronics away and paying attention. Before anybody gets offended, I’m not judging you by the amount of screen time you log each day or what you do there. Distractions to allay boredom are necessary and as old as the human race. Archaeological sites from every ancient civilization reveal evidence of games and alcoholic beverages—two enduring ways to keep yourself entertained. Once the goats have been milked, you’ve got to do something while you wait for your new batch of wine to ferment, right? Nobody is bored when they’re playing backgammon or drinking.  Doing both at the same time is even better.

But that sort of fun doesn’t fly these days—the digital world is too compelling, our attention spans too short and demanding to roll dice and push chips around a board, even if we are buzzed. Before phones and computers, we had to suffice with magazines and newspapers while we waited. But they are limited in scope and never entirely captivated our attention, so we would occasionally glance up and notice what was going on around us. Today, we literally have the world in our hands and in our laps. Wherever we are, we can silently conduct important business, shop, commit criminal acts, argue, propose marriage, or sign divorce papers. The convenience is very private, very myopic, and very isolating, I think. It’s ironic that being so connected seems to ultimately disconnect us in a fundamentally human way. Participating in the world immediately around us has become a lost art.

And it’s a very important art for not just writers, but everybody. We all have an elemental need to share, connect, and communicate. We’re not healthy if we don’t. But we can’t do that if we don’t pay attention. Anything available online is there forever and can be accessed at our leisure, but the real moments happening in real life around us are the ones that can’t be missed. They can be ordinary, sad, poignant, uplifting, or disturbing, but they happen fast and once they occur, they’re gone forever if we’re not watching and documenting. I think of writing as an internalized form of photography. In either medium, the goal is to tell a story.

This is another reason I write. Everybody has a story, big or small, and they’re all worth knowing. Humanity is a collection of actors in a grand play, and characters in a novel are a reflection of that—actors on a psychological stage devised by their creators. Due diligence is the only thing that brings them to life in a substantive way. I do exhaustive research, but before my writing begins, my job is to observe and interact with as many strangers as I can at every opportunity. That’s the most important research I do. Even the briefest exchange can and often does inspire an entire novel. There is an appropriate time to leave behind the legitimate exhortations of parents—don’t talk to strangers!—and dive full-on into this reckless practice of real-life interaction. (This is assuming COVID isn’t permanent.)

Deep into the Dark is quite a departure from the Minneapolis-set Monkeewrench series and it was so exciting and energizing to write with an entirely fresh palette. This book takes place in Los Angeles, featuring a new cast of characters navigating thrills, chills, and general mayhem against the backdrop of the City of Angels’ edgy urban zeitgeist. If I hadn’t lived there for a decade, assiduously engaging in cultural immersion and observation, I wouldn’t have been able to write about the city or the people who inhabit it. Being truly present makes life more interesting and more rewarding. Social distancing should only be physical, not psychological. And even if you’re wearing a mask, you can connect with others in meaningful ways. You might just find yourself making stuff up, too. I hope you enjoy that as much as I do.

More: Read an Excerpt of Deep Into the Dark here!

Comment below for a chance to win a copy of Deep Into the Dark!

The Deep Into the Dark Comment Sweepstakes: NO PURCHASE NECESSARY TO ENTER OR WIN.  A purchase does not improve your chances of winning.  Sweepstakes open to legal residents of 50 United States, D.C., and Canada (excluding Quebec), who are 18 years or older as of the date of entry.  To enter, complete the “Post a Comment” entry at https://www.criminalelement.com/are-you-paying-attention/ beginning at 6:00 p.m. Eastern Time (ET) January 11, 2021. Sweepstakes ends at 5:59 p.m. ET January 25, 2021. Void outside the United States and Canada and where prohibited by law. Please see full details and official rules here. Sponsor: Macmillan, 120 Broadway, New York, NY 10010. 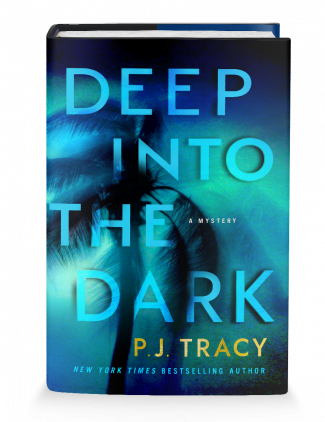 About Deep Into the Dark by P. J. Tracy:

Sam Easton—a true survivor—is home from Afghanistan, trying to rebuild a life in his hometown of LA. Separated from his wife, bartending and therapy sessions are what occupy his days and nights. When friend and colleague Melody Traeger is beaten by her boyfriend, she turns to Sam for help. When the boyfriend turns up dead the next day, a hard case like Sam is the perfect suspect.

But LAPD Detective Margaret Nolan, whose brother recently died serving overseas, is sympathetic to Sam’s troubles, and can’t quite see him as a killer. She’s more interested in the secrets Melody might be keeping and the developments in another murder case on the other side of town.

Set in an LA where real people live and work—not the superficial LA of Beverly Hills or the gritty underbelly of the city—Deep into the Dark features two really engaging, dynamic main characters and explores the nature of obsession, revenge, and grief.

P. J. Tracy is known for her “fast, fresh, and funny” characters (Harlan Coben) and her “sizzling” plots (People); the Monkeewrench series was her first, set in Minneapolis and co-written with her mother. Now with Deep into the Dark she’s on her own—and it’s a home run.

P. J. Tracy is the pseudonym of Traci Lambrecht, bestselling and award winning author of the Monkeewrench series. Lambrecht and her mother, P. J., wrote eight novels together as P. J. Tracy before P. J. passed away in 2016. Lambrecht has since continued the Monkeewrench series solo. She spent most of her childhood painting and showing Arabian horses, and graduated with a Russian Studies major from St. Olaf College in Northfield, Minnesota, where she also studied voice. She now lives outside Minneapolis.