January 4, 2022
John Keyse-Walker's mystery series is set on the remote island of Anegada—the least populated island in the British Virgin Islands. Learn more about the sun-soaked locale and why it's the perfect setting for a murder mystery. And make sure you check out his latest novel, Palms, Paradise, Poison—available now!

The Teddy Creque mystery series is set on the tropical island of Anegada in the British Virgin Islands. Anegada was initially chosen because I was familiar with the island and its people; I’d had the pleasure of visiting it more than a dozen times. But when I dug deeper into my surface acquaintance with Anegada, I realized it was a perfect place… for murder. Here’s why:

Mysteries are often set in small towns. An island is the ultimate small town surrounded by water, where everyone knows everyone and where most secrets are in the open to the locals and inscrutable to the rest of the world.

Anegadians serve as models for many of the series’ main and supporting characters. Even though there are only two hundred people on Anegada, the back-of-beyond nature of the place, the empty desert interior, and the blue vastness of the surrounding Caribbean, make those two hundred souls very much their own people—unique, hardy, and, yes, quirky. And quirky, no matter how it manifests itself, equals interesting characters.

While Anegada is small, its location in the world looms large for a writer looking to add variety to a series setting. Within easy travel range of the U.S., the other islands of the British Virgin Islands, the Windward and Leeward Islands, Cuba, and even South America, Anegada’s geography provides almost unlimited opportunities for the main character Constable Teddy Creque to venture off-island in search of trouble, and for trouble from afar to wash up on Anegada’s pristine shores.

Mysteries can be set in down-and-out Midwestern towns, on the mean streets of New York City, or in quaint villages on windswept Scottish moors—all places that are bleak and inclement. Or a writer can set a mystery on a sunny beach beside a blue sea, with reggae music in the background and a rum-and-something drink lubricating the story. I know which setting I prefer.

On Anegada, the tourists and their partying ways are always there, sometimes in the background and sometimes in the thick of the plot. It is something any reader who has visited a tropical tourist location can relate to (and maybe envision themselves a part of).

Innocent honeymooners. Lurid assignations. A vacation hook-up. It is all human nature and nowhere are we more human than at the beach. And what goes hand in hand with sex (in mysteries, anyway)? Murder!

Anegada is a true pirate island. In the 1600s, several pirates called it home. Today many of the island’s features have piratical names: Bone’s Bay, Windlass Bight, Pearl Point. Modern-day treasure hunters still find cannonballs, hand-blown rum bottles, and other artifacts of pirate times, and there are rumors of treasure hordes that have been found and never reported to the government taxing authorities. Is there a better MacGuffin around which to wrap a tale of murder than a real pirate treasure?

Every place has a government, but in Anegada and the British Virgin Islands, the head of government is Her Royal Highness, Queen Elizabeth II. The royal presence permeates every aspect of life. The Queen’s portrait even hangs in the little shed that serves as the terminal of the island’s gravel-runway airport. And when a criminal meets justice, they aren’t just sent to prison, they are sent to Her Majesty’s Prison.

In every mystery I’ve ever read, somebody eats. Detectives in New York City down hot dogs standing at food carts. Western sheriffs get by on a can of beans and a swallow of jerky while chasing the bad guys through the Badlands. On Anegada, both the criminals and their pursuers feast on lobster, conch fritters, fried yellowtail snapper, fiery Scotch bonnet pepper sauce, fungi, and johnnycake. Who wants a mystery where food is just fuel when you can have a story with real flavor?

Most mysteries and their characters are tied to dry land. The Caribbean Sea to the south and the vast Atlantic to the north of Anegada add interest, a salty venue that allows a book’s characters to sail upon, dive into, stroll beside or simply gaze out across those waters in their ever-changing shades of pale green, emerald, royal-blue, and purple-black.

There you have it, the reasons I chose Anegada as a perfect place for murder. What setting will you choose for your next read? 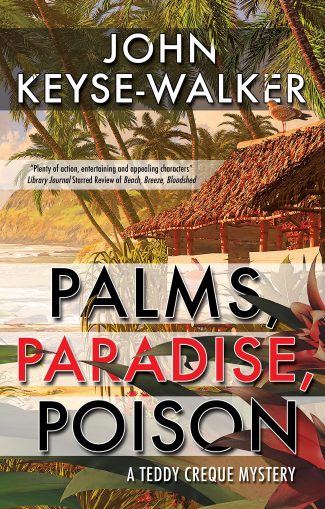 Constable Teddy Creque, the sole police officer on the tiny, sun-soaked island of Anegada, is used to weathering storms. So when Hurricane Leatha hits the Caribbean with brutal force, his main concern is keeping the island’s two hundred residents safe.

Teddy expects the power to go out. He expects the phone lines to go down. But he doesn’t expect the radioed message from the Royal Virgin Islands Police Force headquarters, informing him of a dangerous escaped prisoner. Queen Ya-Ya is a practitioner of ancient Afro-Cuban rites—and rumor has it she can kill with magic.

Teddy doesn’t believe in magic, and when he easily recaptures the dignified, imposing Queen Ya-Ya, he doesn’t believe his prisoner is dangerous either. But when she mysteriously kills a man from inside her locked cell, before vanishing once more into the night, Teddy is forced to reconsider . . .