Andrea Kane Excerpt: A Face to Die For 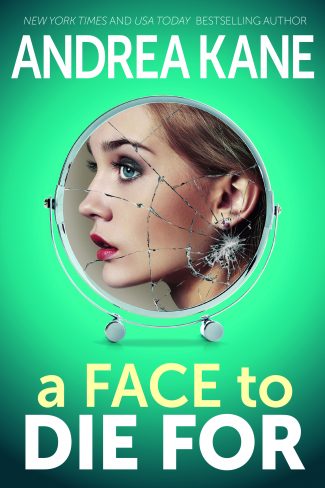 A Face to Die For

A Face to Die For by Andrea Kane is the sixth book in the Forensic Instincts series.

In A Face to Die For, New York Times bestselling author Andrea Kane explores the urban legend of the doppelganger, as the readers’ favorite team of investigators (Forensic Instincts) find themselves in a conflict of interest between two clients. When one case unexpectedly intersects with the other, the only solution is to find the link between the two and unearth who is pulling the strings and why.

Gia scanned the traffic-crammed street, walking to the curb and simultaneously raising her arm to hail a taxi. She wasn’t up for the subway today. Nor for the marathon walk. She’d grab a cab to Grand Central Terminal, where she’d hop a train to her suburban townhouse in Rye.

She’d made eye contact with one driver who began veering his way through pre-rush-hour traffic in her direction, when a breathless female voice beside her said, “Danielle! What are you doing in the Big Apple? Is there some kind of veterinary conference going on? Or do you have another interview at that prestigious animal clinic? And I love your hair! Did you get extensions? Did you have it done here?”

Startled, Gia turned around. The woman was about her age—late twenties—with wispy bangs, a Midwest twang, and smiling eyes. The rest of her was swallowed up by the slew of Bergdorf Goodman bags she carried. She’d obviously done some serious shopping.

“It’s me—Sarah.” The young woman lowered her bags to the curb, letting Gia see all of her, as if that would reveal her identity. “Sorry. I just took a week’s vacation and promised myself all the wonders of the Big Apple, including a spa day, theater tickets, and shopping, shopping, shopping. I fly home on Monday. Do you have time for a drink or dinner, or are you tied up in animal-speak all weekend?”

Gia shook her head in confusion. “I’m so sorry. You have me confused with someone else.”

“I’m not being funny. I have no idea who Danielle is, but I’m not her.” Gia frowned as her taxi pulled away.

“I don’t understand.” Sarah was peering at her closely, inspecting every feature. “I’ve known Dani for twelve years. And you’re the spitting image of her—except for your hair.” A pause. “And your accent. Kind of like a New Yorker, but not.”

“New York suburbs by way of Montana.” Gia smiled faintly. This Sarah was nice and clearly puzzled by the mistaken identity. But she herself was beat. She wanted to go home, grab some Chinese, and be a couch potato. She had three weddings this weekend—two tomorrow and one on Sunday. She needed to soak in a hot tub and zone out.

“How weird.” Sarah pulled out her cell phone and quickly scrolled through some photos. “Here,” she said, holding out the phone. “That’s Dani and me at our ten-year high school reunion. It was taken just last week.”

Politely, Gia took the phone and glanced down at the picture. There were two young women posing at a catering hall, raising their glasses to the camera. Sarah and… Gia’s eyes widened as she focused on the other girl, and she almost dropped the phone. Small as the photo was, the smiling girl with short dark hair—rather than her own stylishly highlighted shoulder-length cut—was a dead ringer for her.

“Wow.” She held the phone closer, turning it horizontally and stretching the picture to make “Danielle’s” face larger and clearer. It was uncanny. The woman even had the same dimple in her right cheek. And the shape of her eyes… the curve of her mouth… The resemblance was startling and kind of creepy.

“No wonder you didn’t believe me when I said I wasn’t her.” Gia couldn’t stop staring at the phone. Her curiosity was beyond piqued. “Danielle what? From where? And you said she’s a veterinarian?”

“Yes.” For a moment, Sarah looked uneasy about giving out information on her friend. Then she seemed to realize the extenuating circumstances, as well as the general nature of Gia’s questions. Plus, as a veterinarian, Danielle’s photo and bio would be posted on the practice’s website. So anonymity wasn’t exactly an issue. “It’s Danielle Murano, and she’s a vet in Minneapolis.”

A nod. “We met at a sweet-sixteen party. We’ve been close ever since—close enough that it’s ridiculous for me to mix her up with someone else.” She shook her head, utterly baffled. “But you could be twins.”

“Yeah . . .” Gia reluctantly handed Sarah back her phone. “My name’s Gia Russo,” she said, extending her hand to shake Sarah’s. It was time to reciprocate the info sharing. Poor Sarah had the right to know the specs on her friend’s double—if for no other reason than to laugh about it over drinks. “I’m a wedding planner here in the tri-state area. And you were right about my accent. I didn’t always live here. I spent my childhood in Bozeman, Montana.”

“A wedding planner?” Sarah looked intrigued as she met Gia’s handshake. “That must be quite a job in this area. Oh, and I’m Sarah Rosner.”

“Hi, Sarah.” Gia grinned. “And if you mean, is my job rewarding but overwhelming, the answer is yes.”

Before Sarah could reply, she was jostled by two women in business suits, who blew by her and nearly knocked her down. She regained her balance, gazing ruefully after them. “I’m not used to this. Minneapolis is hectic, but nothing like New York. Plus, I kind of think we’ve outworn our Fifth Avenue welcome.”

“You look exhausted, or I’d suggest we grab a drink.”

“Normally, I’d love to.” Gia was frank. “But it’s a Friday in May. I have two weddings tomorrow and a wedding on Sunday, not to mention a dozen texts to answer and a venue to scout out in between. All the brides are, understandably, frantic. I really need to get home, do some work, and collapse.” She dug in her purse and gave Sarah a business card. “Here’s my contact information—just in case your friend wants to laugh over the coincidence.”

“Can I take a picture of you?” Sarah asked.

“Sure.” Gia waited until Sarah had taken a couple of cell-phone shots. “Now I really have to get going. It was a pleasure to meet you.”

“You, too. I’ll pass along your info and picture to Dani.”

“Good. Take care.” Gia turned and headed for the subway station. So much for a taxi. The streets were fast becoming gridlocked.

She could sense Sarah staring after her until the crowd swallowed her up.

Copyright line: Excerpted from the book A FACE TO DIE FOR by Andrea Kane. Copyright © 2017 by Rainbow Connection Enterprises, Inc.  Reprinted with permission of Bonnie Meadow Publishing. All rights reserved.

Andrea Kane is a New York Times and USA Today bestselling author. Kane’s first contemporary suspense thriller, Run for Your Life, became an instant New York Times bestseller. She followed with a string of bestselling psychological thrillers including No Way Out, Twisted, and Drawn in Blood. The first showcase of their talents came with the New York Times bestseller, The Girl Who Disappeared Twice, followed by The Line Between Here and Gone, The Stranger You Know, and The Silence that Speaks. Kane’s beloved historical romantic suspense novels include My Heart’s Desire, Samantha, The Last Duke, and Wishes in the Wind. With a worldwide following of passionate readers, her books have been published in more than 20 languages. Kane lives in New Jersey.