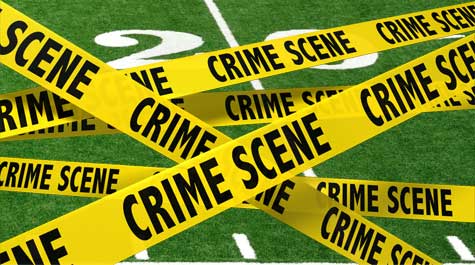 An observation I had in my years working for Sports Illustrated: athletes and the heroes of crime fiction have much in common, but most simply this—a ruthless clarity of purpose and an ability to perform at their best when the action reaches its climax.

Below I’ve assembled a football team populated by great characters from crime fiction. I wound up placing more criminals on offense and more detectives on defense, which seemed natural. It is, after all, the criminals who are trying to get something past the detectives.

Richard Stark’s master thief is the man to run my offense. No one is better at anticipating angles, planning around the weaknesses of his teammates, and ruthlessly attacking the vulnerabilities of his opponents. I looked hard at Sherlock Holmes for the job, but, even though he’s smart enough to beat the drug tests, I can’t have a cocaine user as the face of my franchise.

In all of crime fiction, there has never been a figure more elusive than Ripley. He’s a master at finding that narrow opening and escaping through it. I just have to hope that he won’t decide that he wants to be the quarterback, kill Parker, and then pretend to be him.

I also have Ripley returning kicks.

Going for beef here, obviously. The modern offensive lineman needs to be quick, too, so I’m hoping that the fear of incurring Parker’s wrath will get these heavyweights moving, at least in short bursts. I’ll have to work these guys hard in practice.

Robert Crais’ tough and taciturn hero will, in this setting, be a natural ally for Parker and a motivator to the rest of the offensive line.

Go ahead and laugh. But looking at my team, I’m worried that my average age is a tad high. So I’m asking the Hardy Boys, the teen protagonists of the first detective stories I ever read, to suit up.

For my defensive ends, I want players who will be methodical and relentless in their pursuit of the quarterback.  These Swedes will work hard in the film room to scout an opponent’s tendencies. If they can get me one sack each per game, I’m happy.

He works with a canine in Spencer Quinn’s entertaining Chet and Bernie series, so I trust he’ll be comfortable lining up in a four-point stance.

Lee Child's Reacher has size and toughness, which is exactly what I want in the middle of my defense, and the best at this position have often been a little unbalanced. With his great sense of timing, I’m hoping to get a “Lavar Leap” or two out of him.

Rawlins brings the kind of blue-collar ethic this defense needs, and the backstory given to him by Walter Mosley, in which he is essentially orphaned, calls to mind that of the great Packers linebacker Ray Nitschke.

Outside Linebackers: Jack Foley and Buddy

These Elmore Leonard creations know how to work together, and they have the unflappability needed to be able to function in a unit led by Reacher without going crazy.

From Deion Sanders to Richard Sherman, the best cornerbacks of recent years have had bold personalities, so I’m drafting these James Lee Burke characters for the position. However well they do in games, I’m looking forward to seeing these guys line up against the Hardy Boys in practices.

Michael Connelly’s Bosch has seen it all in the L.A police department without losing his passion or focus, and I need a veteran with a strong procedural background anchoring my defensive backfield, especially with the personnel risk I’m taking at free safety.

I didn’t love Stieg Larsson's Girl With The Dragon Tattoo the way others did, but no one can question the Salander’s intensity. She’s an intimidator, and if there’s a fumble, I expect her to emerge from the bottom of the pile with ball in hand. Plus, in the American version of the movie, Salander was played by Rooney Mara, and the Mara family owns the New York Giants and have been part of the NFL since its founding.

Roger van Gulik’s hero from ancient China had to serve as detective, judge, and jury, so I trust that he’ll be fine if, at the end of the game, suddenly all the responsibility falls on his toe.

Modesty would seemingly forbid me from picking a character from my own book, but Gallow is an actual professional punter, and I can’t ignore that kind of experience. In five seasons he’s never shanked a kick, and if the return man breaks through the coverage, the 6'4″, 225-pound Gallow can deliver a wallop of a tackle. He enjoys these hits a little too much, to be honest with you.

My lone dip into the world of TV detectives, but the man in the rumpled raincoat has everything I want in a coach. He’s not a yeller, and he’s a master at pushing people’s buttons.

So that's my all-crime football team. As anyone who's ever played fantasy football can attest, tinkering is inevitable. So take to the comments and help me out with a scouting report; let me know who I missed, who should be higher up on the depth chart, and how we can pummel the opponents.

Comment below for a chance to win a copy of Bill Syken's Hanman's Game, the debut mystery in the Nick Gallow series about a professional punter who's caught up in the murder of a new teammate!

Hangman's Game Comment Sweepstakes: NO PURCHASE NECESSARY TO ENTER OR WIN.  A purchase does not improve your chances of winning.  Sweepstakes open to legal residents of 50 United States, D.C., and Canada (excluding Quebec), who are 18 years or older as of the date of entry.  To enter, complete the “Post a Comment” entry at https://www.criminalelement.com/blogs/2015/08/and-now-the-starting-lineup-for-your-maltese-falcons-all-crime-football-team-hanmans-game-bill-syken beginning at 12:30 p.m. Eastern Time (ET) August 6, 2015. Sweepstakes ends 12:29 p.m. ET August 13, 2015. Void outside the United States and Canada and where prohibited by law. Please see full details and official rules here. Sponsor: Macmillan, 175 Fifth Ave., New York, NY 10010.

After reporting for several newspapers, Bill Syken spent eight years as a staff reporter and editor at Sports Illustrated, where he continues to work as a writer and editor for its books division. He earned a B.A. in English from Columbia University and a master's in journalism from the University of Missouri. He lives in Philadelphia. Hangman's Game is his first novel.