April 26, 2022
In "Skin and Bones", an original short story in the Paul Doiron's bestselling Mike Bowditch series, the killing of a bald eagle unearths ties to a tragic case from mentor Charley Steven’s past. Read an excerpt of "Skin and Bones" here!

It had snowed the night before, just a trace, but now the sky was a deep blue, and a faint breeze was blowing powder off the boughs of the pines. Spellbound by the glitter in the air, I slowed my patrol truck and thought how it might have seemed to someone more innocent than myself—a small girl, perhaps—as if I had happened upon a piece of fairyland in the North Maine Woods. Then the moment passed, and my real-world anger returned.

I had come to the house of my friend on a mission.

Before he’d retired from the Warden Service as chief warden pilot, Charley Stevens had patrolled districts all over the state, including the same western mountains where I had grown up. The crafty geezer was still the best woodsman I knew, which is why I had brought my problem to him.

His old hunting dog Nimrod, having recognized the sound of my truck, came limping down the shoveled steps, wagging his tail.

Charley was past seventy now, but he shared none of the elderly animal’s stiffness. He was just as wiry and vigorous as he’d been as a young game warden, people said. He still had a full head of hair (white where it had once been brown), a handsomely weathered face that culminated in an oversized chin, and a perpetual squint—as if he couldn’t help but view this broken world of ours with skeptical amusement. His hands were huge and rough from splitting firewood, and he just about crushed mine in a welcoming grip.

“To what do I owe the pleasure?” he asked in a faint Maine accent.

I gestured with my thumb toward the back of my battered GMC pickup. “I need your professional opinion.”

I was wearing my winter uniform: black knit cap, green parka over black snow pants, and insulated boots made by L.L.Bean especially for game wardens. The hem of the coat had a zip to allow quick access to my service weapon. Keep in mind I was only three years on the job—“greener than a sprout” in Charley’s words—and expected every license check to end in a shootout.

Charley peered into the truck bed and his grin vanished so fast he seemed to become someone else entirely: a strange and dangerous man.

Snow from the evergreens had fallen upon the dead eagle as I’d driven through the forest, and it had coated its feathers. The bird was powdered sugary white, except for the rust-red crystals where the bullet had shattered the bones in its wing.

“Where did you get him, Mike?” Charley asked without unlocking his gaze from the frozen raptor.

My hot breath showed in the air. “In a cedar swamp on the north end of Third Machias Lake.”

“Where the stream comes in?”

“That’s the place. I got an anonymous call that an ice fisherman had shot him at dusk for no reason at all.”

“Boredom, I expect,” said Charley. “Boredom and meanness. The bird was hanging around the ice shacks because the fishermen were feeding him chubs and such. And then one of the sportsmen decided drinking beer and watching trip flags wasn’t enough of a thrill for him. But the son of a whore only winged the eagle, and he wouldn’t go chasing after it in that dense puckerbrush.”

He was correct in every detail. I didn’t ask how he’d deduced this sequence of events. His mind could always find a path to the truth, whatever tangle of questions he faced.

“My informant was offended enough to call me but not so offended that he would share his buddy’s name. He said it bothered him, as a veteran, to see our national symbol treated so disrespectfully.”

“I wouldn’t judge the man too harshly. The sight of an eagle always moves me, too, and not just on account of its magnificence.”

My friend had been a pilot and a POW in Vietnam, I had to remember.

“The bald eagle also happens to be a federally endangered species,” I said (which at the time it was). “I looked up the punishment for killing one—a maximum five years in prison and a $250,000 fine.”

A pileated woodpecker passed overhead, rising and falling as they do on the wing. Charley followed the red-crested bird with his eyes. “What’s your game plan, Warden Bowditch?”

“After I pass the eagle off to a biologist, I’m going to tear apart the ice-fishing camp on Third Machias. Want to join me, kicking down doors?”

He gave me a look of fatherly forbearance. “Your shooter won’t be there, you know.”

“What should I do then, Charley?”

“Stoking that anger inside you won’t help catch the bastard. Take it from me, young feller.” He pulled thoughtfully on his chin. “What sort of man shoots an eagle for sport, would you say?”

“What sort of man shoots an eagle for sport but won’t claim his trophy if it means getting scratched up and wet in a beaver bog?”

For once I wished he wouldn’t play Socrates with me.

“A lazy and cowardly one. He was probably drunk, as you said, and got out his rifle on impulse. But after he shot the bird, he had second thoughts. Maybe his buddies laid into him for being an idiot. I bet he didn’t stay long at the camp.”

Charley nodded his approval of my reasoning. “Do you really think he’ll be there tonight?”

“I identify the regulars at Third Machias, and then I spy on the shacks to find out which of them is missing.”

(This was, in fact, how I later apprehended the shooter.)

My gaze returned to the dead bird. Beneath its crystalline shroud, it looked less like a formerly living creature than a macabre sculpture. My gloved hand moved of its own volition to brush the powder off its hooked yellow beak.

“In all your years as a warden, did you ever see something this awful?”

The old pilot tensed beside me, enough that his dog noticed and drew close to his leg for a reassuring pat on the head.

He took a step back and tucked his bare hands inside his snowmobile bibs. “I don’t know as it would be wise to tell you the story.”

He considered my question a long time. A fresh gust filled the dooryard with shimmering snow particles that no longer seemed magical.

“Because it involved a man by the name of Jack Bowditch,” he said finally.

“My father? He shot an eagle?”

“You know your dad was a poacher, the most cunning and elusive poacher I ever chased. But Jack never killed a critter that he didn’t eat or give away to someone hungry. He wasn’t Robin Hood—we both know that—but he followed his own code, I guess you’d say. Jack was like a lot of combat vets I’ve known; he thought the system was rotten, and laws were just excuses fat cats made up to keep poor people down. I don’t know as he believed in God, but he believed in justice, however queerly he defined it. And he felt almost a compulsion to deliver it himself.”

This preamble could only mean my father had done something despicable. I had spent most of my life in childish denial about my dad’s capacity for violence. Then, several years earlier, Jack Bowditch had led the Maine State Police on the biggest manhunt in its history, and I had been forced to let go of my innocence—or so I’d thought.

“What did he do, Charley? I deserve to know the truth.”

These words, coming from the mouth of my trusted mentor, sent a chill through me. “I don’t understand.”

He glanced at the house in the pines. The face of his wife, Ora, showed in the front window. She was a woman of high morals whose conscience Charley relied on when his own failed him.

“Let’s go inside for this,” he said. “It’s a story better told in its entirety and by the fire. But I should warn you first.” 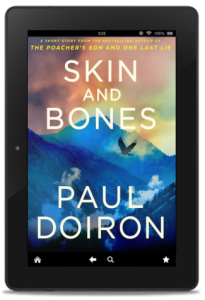 About “Skin and Bones” by Paul Doiron:

When Maine game warden Mike Bowditch discovers a bullet-ridden bald eagle in the Maine woods, he is surprised by the memories it brings back for his mentor, retired warden pilot Charley Stevens. Decades earlier, Charley briefly teamed up with Mike’s father, the notorious poacher Jack Bowditch, on an unsettling case that has haunted Charley for years. The two enemies, both war veterans, found common cause over the senseless shooting of a magnificent eagle.

But what started as a tentative alliance over a wildlife crime soon became something bigger and more terrifying: an investigation into a missing young man whose physically abusive brother might well have finally killed him. When an unspeakable discovery led to an impossible choice, Charley and Jack were forced to decide how far they would go to find justice when faced with inhumanity taken to its extreme.