Let me tell you something buddy, we loved OJ Simpson.

He was in the same pantheon of 70s pro-sports demi-gods as Joe Namath, Kareem Abdul-Jabbar, and Reggie Jackson—but unlike the rest, OJ took us to the next level.

Not only did the OJ have a stellar football career where he won the 1968 Heisman Trophy and was the first player in NFL history to rush 2000 yards, he then went on to star in Avis Rent A Car’s memorable ad campaigns, sprinting through airports. He also entertained us in the supporting role of Detective Norberg in the Naked Gun trilogy.

But on June 17th, 1994, while I was watching my NY Knicks take on the Houston Rockets in the NBA playoffs at some nasty pub in South Brooklyn, when we were interrupted by the news of a white Bronco being pursued by LA’s finest. We were gob-smacked to learn who it was.

A black sports icon had just been accused of killing his white wife. The nastiness then ensued—racial issues, cries of gold-digger and wife-beater; it was a sensationalist media circus the likes of which the 20th Century had yet to see, thanks to cable television and the emerging, yet still mysterious Internet. This went on to be one of the most complex legal, social, political, and media spectacles in the history of modern communications.

We start hard in the opening scenes with footage of Rodney King and the LA riots, even though that was 2 years prior to Nicole Brown’s murder, I assume to foreshadow the race issues that popped up all over this case. The body of Nicole Simpson is found when a barking, bloody-pawed family pet is discovered by a guy wearing possibly the ugliest Hawaiian shirt I have ever seen. What does the shirt have to do with anything later? Nothing. But it was so butt ugly that I was actually distracted by it.

So, butt ugly Hawaiian shirt guy finds the victim in her front yard. Then, we watch the police search the house with flashlights focusing first on family photos with OJ, and then on a bathtub adorned with lit candles. Not the kind of bath someone draws for one's self only.

This is where we first meet Detective Mark Fuhrman (Peter Janov). He and a few police officers decide to pay OJ a little visit. When they get to the Simpson estate, Furman jumps his gate—which in my expert, armchair lawyer opinion would be illegal. After they basically break and enter, a menacing football statue that looks like some frightening totem of an ancient war god meets them in the front yard. We also see the blood stains on the now infamous white Bronco.

Enter Mr. Kato Kaelin (Billy Magnussen) who is basically portrayed as a middle-aged Jeff Spiccoli type—not too bright, not too quick. The cop’s first question to him is, “Sir, are you on a substance?” Kaelin blathers some nonsense about feeling an earthquake last night that leads the police to the lair of an errant bloody glove. We find out Simpson is in Chicago where he gets the news that his ex was murdered. The cop that makes the call is quick to point out that OJ didn’t ask details. Cut to a long receding shot of OJ’s back—remember that shot. It has another cameo.

The portrayals of the murder victim’s body were remarkably graphic. Lots of dried blood and a painfully contorted post-mortem body pose. We also discover that Ronald Goldman, who worked at a near bye restaurant, was also found dead in the house. Not surprisingly, we don’t hear much about Goldman—much like we didn’t when the case actually occurred. There is a drop dead, creepy shot where we hear the victim’s child call on her answering machine, while the forensics crew is detailing the crime scene.

We are introduced to a dashingly coiffed Robert Kardashian (David Shwimmer), OJ’s friend and confidant, as well as many of the key players in the drama about to unfold, including: 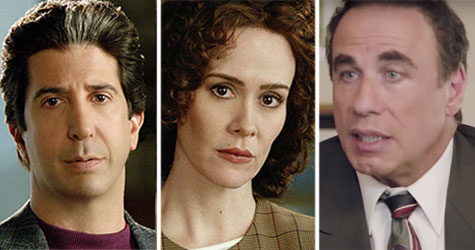 The circus of reporters begins to swarm. One intrepid paparazzo gets a shot of OJ in handcuffs that prefaces an epic meltdown by OJ screaming how you can’t put the Juice in handcuffs. This is followed by a creeptacular little intimidation scene where Simpson cows Kaelin into agreeing that, yes, they were in fact “out for burgers” when Simpson said they were. We listen through the discomfort of OJ’s police interrogation, inconsistencies flying out of his mouth like bottle rockets, Marcia Clark chain smoking and losing her cool every time she hears one on tape.

There’s a lot of Marcia Clark chain smoking and making indignant faces at male colleagues, and more of Cochran portraying the racial equality crusader. Another piece of poignant foreshadowing, albeit an ironic one, comes when Cochran proclaims that sometimes, “money is the only way to get justice,” regarding a case he’s currently working.

The climax comes after Nicole Brown’s funeral where we are again greeted by the site of Simpsons back, over Nicole's casket, head tilted in a peculiar manner—the camera panning back long and slow. We wonder if this shot will keep popping up.

When they get back home, Simpson writes his will and a letter to fans because he’s going to commit suicide by revolver. He doesn’t pull the trigger, of course, but then basically holds himself hostage so he can slip out through the chaos. And here comes the chase—we finally get to see the infamous Bronco speeding down the freeway, while at the prosecutors’ office, they realize how ridiculous they look for not having kept Simpson under lock and key.

So far the story has been tight, but we are also in the very tensest parts of the narrative. When we get to the long courtroom scenes, I’m wondering if they can keep up the pace.