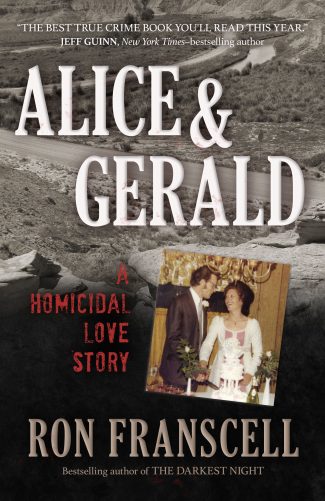 One morning, a new neighbor showed up in the space next to Gerald’s. A bigger trailer than his. No big deal, since folks who lived in mobile home parks voluntarily gave up panoramas and privacy. Once Gerald’s pathetic view was blocked, it wasn’t long before there came another metallic rap on his front door.

It was the trailer park manager. Hanging back on the bare ground behind her was a big-breasted, comely woman with long dark hair, dressed like a dollar-store buckle bunny in a Western pantsuit, cowboy boots, and dangling turquoise earrings. Not bad, Gerald thought. Two kids stood nearby, a towheaded toddler and an indifferent teenager who looked as if she might like to be anywhere else at that moment.

They needed some help. A man’s help.

Their trailer’s electrical plug was 110, but the park’s hookups were 220. The manager knew Gerald was a handyman at the mine, so she thought he might be able to save everybody an electrician’s bill (and a city inspection) with some under-the-table quick fix. Gerald took a look, consulted with the power company, and got to work.

It was lunchtime when he finished, so Gerald offered to buy burgers at the Husky Truck Stop cafe. Their conversation was heavier than the usual get-acquainted banter.

Her name was Alice Prunty. Her same story had been told in a thousand other trailer parks every day: She was a widowed nurse and single mom scrabbling for a fresh start. Although she was only in her thirties, she’d been married twice and borne five kids, three of whom were still school age or younger. She divorced her first husband, a cop in her native Illinois, and her second—a philandering World War II vet who drifted from midwestern grain elevators to Wyoming ranch work—died from alcoholism, leaving her a pile of debt, an infant daughter, and a piddling widows-and-orphans pension from the US Army.

Since that guy, Don Prunty, had died a couple years ago, she’d filed for bankruptcy, toiled as a barmaid and bus driver, nursed a few months in a small-town psychiatric hospital, and farmed out the kids to relatives back East when things got tight, which was frequently. To hear her tell it, just another star-crossed mom busting her ass to hang on to the edge of a savage earth hurtling through time and space.

Nice boobs, Gerald mooned to himself.

“I love it,” Alice replied.

“I know a place,” he said. He told her about Atlantic Creek, way up in the Shoshone National Forest, up above the old mining camps of South Pass and Atlantic City. It was barely wider than his truck but chock-full of little brook trout. They made a date to meet the next morning for a day of hiking and fishing up in the mountains. Alice was giddy.

Maybe Gerald was a sucker for love, but he was hooked. Alice was easy on the eyes, earned her own paychecks, seemed like a resourceful gal, already had kids and a trailer, and liked to fish. Damn. He barely slept.

The next morning dawned sunny and warm. Alice showed up outside the trailer with her sprightly three-year-old, Eliza, and her own fishing rod. That impressed the hell out of Gerald. They all piled into Gerald’s old truck and headed up the mountain with a can of worms and a picnic lunch, and they fished all day. Alice frowned upon the scrappy little brookies—she liked ‘em bigger—but she was a good sport about it. She also kept a tight leash on Eliza, who never acted up once. Alice was in complete control—unlike Virginia—and that turned Gerald on.

For his part, Gerald recited jokes from old comedy LPs he’d memorized. Alice laughed at all his stolen humor.

Over a picnic of cold cut sandwiches, Gerald listened patiently as Alice skipped through her life’s arduous tale, never pausing long at any painful memory or giving much detail. She’d been born to an unwed teenage mother in Denver, adopted by a young soldier and his wife, and raised in an Illinois farm town. She got pregnant and married at sixteen; birthed four kids in quick succession; got divorced; got married again to the boozer who dragged her to Wyoming to be caretakers of a historic ranch, then abruptly died, stranding her and their new baby in this beautiful, godforsaken place at the end of the earth. But there was nothing more for her back East. Her only chance to climb out of her hole, to make her own way, was here.

There by Atlantic Creek, he felt Alice’s pain. She was still young and earnest, and Gerald didn’t think she deserved all the pain she’d already endured. But she was a survivor, not a straggler—unlike Virginia. He reckoned, if things worked out the way he hoped, that he could make Alice’s life better. He could give her what she deserved.

Later, they packed up their rods and their creels full of brookies and hiked out. On the bumpy pickup ride home, Gerald knew he had a keeper. Any woman confident enough to venture into the boondocks with a stranger and bare her soul was a woman he wanted to ride with, he thought.

In that long, hot bicentennial summer of 1976, Gerald and Alice fell in love. Hard and fast.

On one of their first real dates—playing pool at a Main Street tavern—Alice confessed that she too had been immediately attracted to Gerald when she first laid eyes on him. Then she beat him soundly at a game he thought he could win.

After a couple more dates, they tumbled into bed. Not one of those forbidden teenager liaisons, but a full-on fuckfest between two consenting adults who’d already bumped a lot of other uglies. And Alice especially knew what she was doing. If Gerald had any reservations about her before he saw her naked, they now lay in a crumpled heap on the bedroom floor.

It was dark outside when the grunting stopped and they slumped back on the wet sheets. Alice cuddled against him. It was the part of lovemaking he didn’t like so much: talking.

But Alice had a story to tell, and she told it softly.

There had been another husband. Her third. After the alcoholic one. A crazy man, a junkie, a door gunner in Vietnam who’d been kicked out of the army for being nuts. Named Ron Holtz. She met him in a small-town Veterans Administration psych ward where she’d taken a nursing job. They fell in love and ran off together to get married, even though she knew it was wrong. They rented a trailer house in Cheyenne, where he drove a cab to support his habit. Then he started beating her and threatening the baby when she cried. He boasted that he’d killed babies in ‘Nam and he’d kill her too.

One night around Christmas, Ronnie Holtz went berserk, and Alice shot him before he could harm the baby. It was self-defense. She didn’t have a choice. She stuffed the brute’s body in a cardboard storage barrel and drove her Pinto into the frigid blackness to drop it down a remote, abandoned mine shaft on the historic ranch she’d managed with her other late husband. She raced home, hurriedly packed up her possessions, and left town before anybody missed either of them.

And nobody ever did. They’d barely cast a shadow in Cheyenne. A few months later, she filed for divorce, claiming abandonment. It was granted when Ron Holtz failed to show up in court.

Alice wept on her new lover. A speechless Gerald, dumbfounded by the confession, just hugged her tight. She told him she wasn’t sure if he could love her now, but he promised he’d never tell a soul. Never. He also reassured her that some assholes, like Ron Holtz, just needed killing, although he secretly wondered why she didn’t just run away.

Either way, as they lay there in the dark, naked and laid bare, Alice’s secret became their bond.

He didn’t know why she picked that particular moment to reveal it. Maybe she felt safe with him. Maybe to test him, or to nudge him a little off-balance. Or maybe it was a warning shot in case he ever raised a hand to her.

But Gerald swore to himself he’d never let Alice go. She was a keeper.

And although he wasn’t especially well churched, it all felt to him like Adam and Eve, after Eve confessed to biting the apple but before the clueless Adam knew what it all meant.