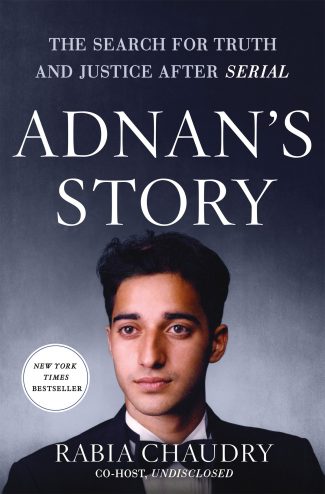 Adnan’s Story: The Search for Truth and Justice After Serial by Rabia Chaudry sheds new light on the case that swept the nation, claiming that the hit podcast only told part of the story.

Serial told only part of the story.

In early 2000, Adnan Syed was convicted and sentenced to life plus thirty years for the murder of his ex-girlfriend Hae Min Lee, a high school senior in Baltimore, Maryland. Syed has maintained his innocence, and Rabia Chaudry, a family friend, has always believed him. By 2013, after almost all appeals had been exhausted, Rabia contacted Sarah Koenig, a producer at This American Life, in hopes of finding a journalist who could shed light on Adnan’s story. In 2014, Koenig’s investigation turned into Serial, a Peabody Award-winning podcast with more than 500 million international listeners.

But Serial did not tell the whole story. In this compelling narrative, Rabia Chaudry presents new key evidence that she maintains dismantles the State’s case: a potential new suspect, forensics indicating Hae was killed and kept somewhere for almost half a day, and documentation withheld by the State that destroys the cell phone evidence—among many other points—and she shows how fans of Serial joined a crowd-sourced investigation into a case riddled with errors and strange twists. Adnan’s Story also shares Adnan’s life in prison and weaves in his personal reflections, including never-before-seen letters. Chaudry, who is committed to exonerating Adnan, makes it clear that justice is yet to be achieved in this much-examined case.

Malik reported: Amir Az-Zubair would stop speaking whenever he heard thunder and he would say, “Glory to Him who said: The thunder exalts His praise as well as the angels from fear of Him,” (Quran 13:13). Then Amir would say, “This is a strong warning to the people of the earth.”

When Adnan was convicted, it thundered three times. The day was bright and sunny, but as we sat there clutching our hands while the foreman pronounced the verdicts, it thundered.

February 25, 2000, was a Friday, which was a good sign. Fridays are auspicious for Muslims. It is a blessed day, our day of sermons and congregational prayer, the day we start all new things with a “bism`illah,” invoking the name of God.

I sat with Adnan’s mother, Aunty Shamim, while other members of the community were scattered behind us. Aunty looked straight ahead stoically, a scarf draped over her head, sitting shoulder to shoulder with her oldest son. I prayed silently as the jury was brought in. On the other side of the wooden railing, Adnan stood with his lawyer. Tall and skinny, facial hair coming in sparsely over his pale face, he was barely entering manhood.

On the first count, murder in the first degree: guilty. It thundered and we all turned our heads, looking out the courtroom windows at the clear skies, stunned.

On the second count, kidnapping by fraud: guilty. Then it thundered a second time and we again turned our faces, scanning the sunny outdoors, confused.

On the third count, robbery: guilty. It thundered again. This time I only glanced outside, keeping my face turned toward Adnan’s slight figure, paralyzed. By the time the fourth count was read, false imprisonment, I had tuned out, my ears filled with the rush of blood.

Closing arguments had been made only a few hours earlier; we had just begun contemplating where to eat lunch when we were called back to the courthouse. A verdict had been reached. A fast and hard verdict. The weekend loomed ahead after all.

The bailiff approached Adnan and closed cuffs around his wrists and ankles, the same ones he had worn shuffling in and out of court day after day. There were audible gasps and sobs, some escaping me as I rocked back and forth in my seat, repeating “no, no, no…” This was not actually happening. We were told this was not going to happen.

Adnan Syed was seventeen when he was arrested for the murder of his former girlfriend Hae Min Lee in 1999 in the suburbs of Baltimore, Maryland. He was convicted and sentenced to life plus thirty years. My younger brother Saad’s best friend, Adnan is like a brother to me, and for seventeen years now my family and I have stood by him as he has maintained his innocence.

I was in law school when Adnan was arrested and still a student when he was convicted. I was never Adnan’s lawyer. But my life has remained tethered to Adnan through an abiding belief that he is innocent.

In 2013, after exhausting almost all appeals, I contacted Sarah Koenig, a producer at This American Life. Her subsequent investigation turned into the podcast Serial, an international phenomenon and the most successful podcast ever produced.

Serial told a riveting who-done-it tale in such a masterful way that some people did not realize it was a true story even after the twelve episodes ended. The story it told was true, but it wasn’t the whole truth, or the whole story.

The success of the podcast was understandable, if not completely expected. This is a story constructed of dozens and dozens of layers, an array of odd characters, malfeasance and misjudgments, and the aligning of all that can go wrong, and must go wrong, to convict an innocent person. But the real allure of Serial was the man at the center of the story, Adnan. Listeners were left wondering, week after week, about who he really was.

Serial presented two options. Adnan was either an innocent, wrongfully convicted young man who had suffered a great travesty of justice. Or he was a cold-blooded psychopathic murderer, driven by either jealousy or brutal religious beliefs, who had managed to manipulate his loved ones into believing his innocence for fifteen years.

This book will tell the stories Serial didn’t and address issues of justice, bigotry, faith, community, devastation, healing, and hope from the point of view of Adnan and those who support him. I am here to tell Adnan’s story as, after so many years of living it and studying it, I see it. But more importantly, to give Adnan his own voice back. Throughout the book, Adnan’s own contributions will do just that.