A Study in Psychopathy with Vera Kurian

September 3, 2021
Vera Kurian's debut novel, Never Saw Me Coming, is a compulsive, voice-driven thriller about college student and psychopath, Chloe Sevre. Chloe participates in a clinical study about psychopaths, but a dangerous game of cat and mouse ensues when one of the other subjects in the study is found murdered. 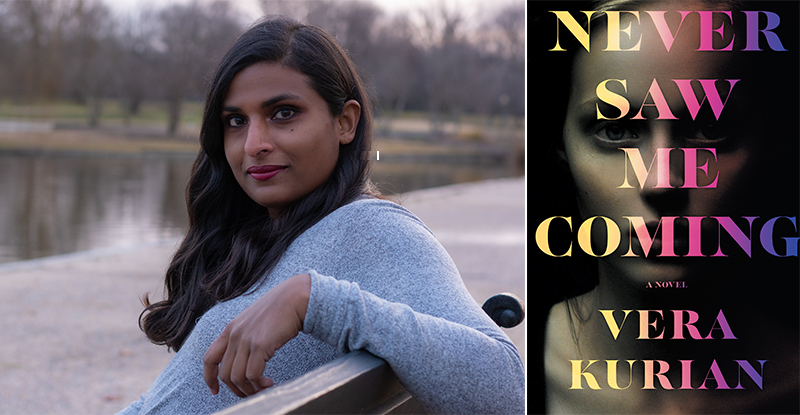 When I started writing a psychological thriller, it was inevitable that a lot of psychology would be baked into it. I have a PhD in Social Psychology and spent six years (ten, if you count undergrad) steeped in the study of human minds. I started out as a writer of literary fiction who often dabbled with genre, and my heavy diet of thrillers and true crime eventually resulted in my writing my debut novel, Never Saw Me Coming.

The novel centers on a college freshman entering a special clinical panel study for diagnosed psychopaths in exchange for a free ride to university. There were a few things I already knew a lot about that I used to create a feeling of realism, despite how “out there” the novel’s concept is. As a true crime fan, I have read about many murderers who just don’t seem to be operating in the same plane of existence as the rest of us: some commit violent crimes, feel no guilt about it, and sometimes blame their own victims for their misfortune. I also love stories of similarly minded conmen who move through the world taking advantage of others with wild lies and parasitic lifestyles. I had already read a couple of pop psychology books about psychopaths, but added to this the Handbook of Psychopathy, and a more thorough reading of some entries in the Diagnostic and Statistical Manual of Mental Disorders. Even the most bare-bones definition of a psychopath—someone who does not feel empathy or fear, lacks a conscience, and is highly manipulative and impulsive—had an interesting backbone for characters.

While of course I wanted my characters to be reasonable depictions of psychopaths, not everyone with a diagnosis of a particular disorder looks the same. Not all depressed people can’t get out of bed—some will get up, get dressed, and go to work, and still be depressed. I crafted each psychopath in the novel to meet the criteria, but to be at their core different people with different personalities, drives, and histories. Chloe, the central narrator, clearly thinks nothing is wrong with her, while another psychopath wants to change for the better, and yet another is entirely indifferent towards their diagnosis.

Robert Hare, one of the leading researchers on psychopathy, has argued that some environments, such as corporate America, form structures that even allow psychopaths to thrive.

In the course of my reading about psychopathy, two aspects stood out to me as really interesting. One was that some experts believe that a small percentage of the population is psychopathic; while prisons might have a disproportionately high percentage of them, this is because impulsivity and disregard for societal norms—aspects that define psychopathy—often are associated with criminal activity. But the reality is that many psychopaths are out there interacting with us, and a fair number of them are high-functioning. Robert Hare, one of the leading researchers on psychopathy, has argued that some environments, such as corporate America, form structures that even allow psychopaths to thrive.

The second piece of research I encountered that fascinated me was a chapter in the aforementioned Handbook entitled, “Serial Murder and Psychopathy.” This study explored the relationship between serial killing and psychopathy and provided some surprising (at least for me) evidence that runs contrary to what many would think. The researchers took a subset of serial killers for which they had detailed case histories and, using the revised Psychopathy Checklist, attempted to determine which of them were actually psychopaths. The examined list included Ted Bundy, John Wayne Gacy (the “Killer Clown”), Ed Kemper, Jeffrey Dahmer, and Gary Ridgway (the “Green River Killer”). I was surprised that only one—Ted Bundy—clearly made the cutoff score for a diagnosis of psychopathy, with Gacy falling on the borderline. It is so common when we come across horrifying crimes to default to calling the offenders “psychopaths,” but this is a real term with a specific meaning. While both Bundy and Dahmer committed such acts, if you know anything about either’s personality, you would know the strong contrast between Bundy’s reported charming demeanor and Dahmer’s awkwardness in social situations. The authors conclude that probably only a small percentage of serial killers are actually psychopaths, arguing that “psychopathy involves a persistent pattern of reckless, irresponsible behavior that pervades the affected individual’s life. By contrast, many serial murderers commit their crimes in a secretive, highly compartmentalized manner—maintaining an ostensibly normal pattern of behavior in other areas of life.”

My, that got dark.

But on more cheerful topics, if you were a student of psychology, perhaps someone who took an intro class, I included a lot of psychology Easter eggs in Never Saw Me Coming. The students in the panel study have to complete experiments or surveys occasionally so that the researchers can better understand how the minds of psychopaths work. All of these little experiments are taken from real psychology studies, often classics from social psychology, and it was fun to imagine how psychopaths would perform in any of them. For me, creating a fictional clinical panel study in a fictional psychology department was a bit like going back home again: there’s an elder psychology professor heading the study, graduate students with Research Assistants working with them, and any number of research subjects or undergraduate students floating around the department. The joy of writing this novel for me was mixing that real world with the fictional prospect of psychopaths in the study potentially crossing paths—as Chloe puts it, what would happen if “two wolves met in the night?”

Vera Kurian is a psychologist and writer and a longtime resident of Washington DC. She has a doctorate in social psychology, specializing in intergroup relations, political ideology, and quantitative methods. She has studied fiction at Breadloaf, Sewanee, VONA, and attended juried workshops at LitCamp, Colgate, Juniper, and the Marlboro Summer Writing Intensive. She has been nominated for a Pushcart Prize and was a semifinalist for the Mark Twain Royal Nonesuch Humor Writing Contest.