Hard on the heels of the Oompa Loompa crime spree we reported about recently comes news of four “Smurfs” in Melbourne, Australia, who assaulted a man in a convenience store. According to The Age, the 37-year-old victim told police:

…a man dressed as Papa Smurf approached him and asked for a cigarette. The man offered him a smoke but the Smurf insisted it be lit before he handed it over.

Police said the man refused and noticed the man dressed as a Smurf was with three other men, who were also dressed as Smurfs.

And that’s when they smurfed him.

A follow-up to the original story (which included the CCTV footage above) indicates that the four “Smurfs,” aged 18 and 19, have turned themselves in and will be charged with “assault-related offenses.”

Of course their ages should have been an immediate clue to their lack of Smurf bona fides—the real Papa Smurf is 542 years old, and if he’s ever bummed a cig no one in Smurf village is saying. 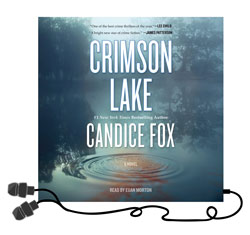 Crimson Lake by Sydney-based, Ned Kelly Award-winning author Candice Fox is a thrilling contemporary crime audiobook set in Queensland, Australia—perfect for listeners who like to immerse themselves in exotic, evocative climes.  Listen to an exclusive excerpt from Crimson Lake, then make sure you're signed in and comment below for a chance to win an audiobook…

Every Wednesday, we here at Criminal Element will put together a list of Staff Picks of the books that published the day before—sharing the ones that we are looking forward to reading the most! This week, three cozies pair with Garry Disher's Australian noir and Rachel Caine's second Stillhouse Lake thriller to highlight a great…