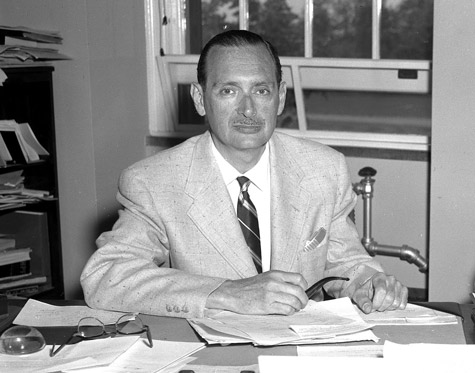 Read this exclusive guest post from Michael Cannell, author of Incendiary: The Psychiatrist, the Mad Bomber, and the Invention of Criminal Profiling, and make sure to sign in and comment below for a chance to win a signed copy of the book!

New York convulsed with anxiety in 1956 as police searched in vain for a serial bomber known as the “Mad Bomber of New York.” The mystery bomber had planted 32 homemade explosives in the city’s most crowded public spaces. He had yet to kill, but it was only a matter of time. The New York Journal-American—an afternoon newspaper of scrappy disposition—called him “the greatest individual menace New York City ever faced.”

In desperation, bomb squad detectives contacted James A. Brussel, a psychiatrist with a particular interest in the workings of the criminal mind. He theorized that he could help describe the bomber by applying “common psychiatric principles in reverse.” Instead of starting with a known personality and anticipating their behavior, as psychiatrists normally do, he hoped to let the mystery bomber’s behavior define his identity—his sexuality, race, appearance, work history and personality type.

Dr. Brussel called it reverse psychology. Today we call it profiling. Whatever the term, it was still an untested concept in the 1950s. Nobody had yet profiled an offender. Not in real life, anyway. Brussel’s only role models were fictional investigators. It was a case of life imitating art. Here are four literary sleuths who profiled offenders decades before the term was coined:

In the 1840s, Edgar Allan Poe created C. Auguste Dupin, a reclusive amateur detective from an illustrious family fallen on hard times. He was the first of his kind—a master of channeling the psychotic mind and the forebear of fictional detectives to come. (Though, Poe never used the word “detective.”)

With his uncanny deductive powers, Dupin is capable of solving convoluted murder mysteries in the seamy reaches of 18th-century Paris. Like a master profiler, Dupin can divine the hidden offender and their entire backstory from bits of hair, scratch marks, torn clothing, and other observable details that baffled the bumbling Paris gendarmes.

Dupin succeeds as a detective because he understands the criminal’s viewpoint, a lesson that would be critical for real-life psychiatrist James Brussel. In “The Murders in the Rue Morgue,” Poe wrote that Dupin “throws himself into the spirit of his opponent, identifies himself therewith, and not infrequently sees thus, at a glance, the sole methods by which he may seduce into error or hurry into miscalculation.”

Dupin was the first great fictional crime solver, but he was short-lived. Poe wrote only three Dupin stories. What’s more, Poe never put much flesh on his character. The stories were more about the puzzle than the person. Sir Arthur Conan Doyle picked up where Poe left off, introducing Sherlock Holmes in 1887. With his deerstalker hat and pipe, Holmes still stands tallest among the fictional detectives. We know him from classic stories like “The Adventure of the Speckled Band” and The Hound of the Baskervilles. Or, more likely, we know him from screen adaptions starring Robert Downey, Jr., and Benedict Cumberbatch.

Holmes is Dupin 2.0, an amplified version of the original profiler but with many of the same quirks. Both are well-educated recluses with eccentric manners and uncanny powers of observation. Neither had friends, aside from their sidekicks. They are so similar, in fact, that The New York Times, in its first mention of Holmes in 1892, chided Conan Doyle for failing to acknowledge how much he borrowed from Poe.

The difference is mostly one of scale; while Poe wrote three Dupin stories, Conan Doyle wrote 56 Holmes short stories and four novels. The real wonder of Holmes is his enduring appeal. Every generation seems to create their own iteration. By the end of the 19th century, Poe and Conan Doyle had established a trope—the urbane amateur detective with oddball habits and an almost clairvoyant ability to translate evidence into a detailed vision of the wrongdoer at large. Their leading men—Dupin and Holmes—were bachelor profilers who, by coincidence, bore strong resemblance to the real-life profiler Dr. James Brussel.

The pattern continued in the 1920s with Lord Peter Wimsey, a dilettante detective created by an Oxford scholar named Dorothy L. Sayers. Her previous books had been slender poetry volumes. Wimsey’s debut (“Whose Body?”) reads like a Holmes parody, with a corpse wearing nothing but a gold pince-nez discovered in a London bathtub. Lord Wimsey prattles on in the effected banter of P.D. Wodehouse’s upper-class twits. But when the body is found, Wimsey reveals himself to be a man of penetrating intelligence with a profiler’s knack for absorbing the evidence—in this case a revealing detail of the corpse’s anatomy, a missing financier, and Peruvian oil shares. Agatha Christie, the so-called Queen of crime, had an entirely different kind of man in mind when she conjured Hercule Poirot. While Dupin, Holmes, and Wimsey are dashing loners, Poirot is the opposite: a dandified former detective with a cherubic face and a comical preoccupation with his hair and mustache. He’s Belgian, and Christie made his accent a point of humor.

For all his silliness, Poirot most closely resembles real-life profilers. More than his predecessors, he relies on his knowledge of human psychology and a fierce intellect. He is the one who most skillfully and convincingly takes in the evidence and, as the information accrues, grasps a clear-eyed sense of the culprit’s identity. “Rest assured,“ Poirot said. ”I am the best!”

Comment below for a chance to win a signed copy of Incendiary by Michael Cannell!

Incendiary Comment Sweepstakes: NO PURCHASE NECESSARY TO ENTER OR WIN.  A purchase does not improve your chances of winning.  Sweepstakes open to legal residents of 50 United States, D.C., and Canada (excluding Quebec), who are 18 years or older as of the date of entry.  To enter, complete the “Post a Comment” entry at https://www.criminalelement.com/blogs/2017/04/a-pioneering-profiler-and-his-fictional-forerunners-comment-sweepstakes beginning at 4:00 p.m. Eastern Time (ET) April 13, 2017. Sweepstakes ends 3:59 p.m. ET April 25, 2017. Void outside the United States and Canada and where prohibited by law. Please see full details and official rules here. Sponsor: Macmillan, 175 Fifth Ave., New York, NY 10010.