Since time immemorial, human beings have been artists. As soon as anything approaching an established society was, well, established, our artistic endeavors began. From the caves of Lascaux to the carvings of the Inuit to the pictographs gracing canyons in the American west, humans have long been creating works of art.

And we’ve been stealing the hell out of artwork for about that long, too. Yes, sadly it’s true: just as we have always bred loftily inspired artists, we have always had our share of dirty thieves. For reasons that are really not good reasons at all, in the modern era art theft has gained something of a sheen of glamour. We think of art thieves as well-dressed, coiffured men with rakish smiles, or striking women wearing long gowns wrapped around long bodies talking up the curator of the latest installation, perhaps asking a few pointed questions about the value of that one gorgeous canvas. And so on.

The art heists we see in books and movies are sexy affairs, indeed. In real life, they are usually low-tech, quick and dirty affairs. Sometimes not, mostly so. Sorry, but art doesn’t imitate life all the time, y’know?

And even the greatest art thefts of all time—even those that required great planning and went off without a hitch—are only partial “successes” at best: art is a strange commodity in that its inherent value in no way ensures greater wealth for the one possessing it. Why? It’s the art thief’s great conundrum:

1. In order for a given piece of art to command a price of any significance, it has to be a relatively well-known, significant piece of art created by an established artist.

2. If the pilfered piece is a well-known work, people will notice when it goes missing.

3. When the thief wants to sell the artwork, he or she will find themselves at a distinct disadvantage at the bargaining table, what with the whole “Everyone knows this piece of art is stolen” thing.

You can picture the exchange after a robbery of, say, gold bars going like this:

GOLD BUYING PERSON: Sure. Is it stolen, though? I don’t want stolen gold.

And then on the other hand after the art theft, we get this:

ART BUYING PERSON: Sure. Is it stolen, though? I don’t want stolen art.

ART BUYING PERSON: So that’s not the Rembrandt that was stolen from that private residence near Dam Square in Amsterdam last year? The piece that was all over the news? The piece worth 12.8 million U.S. dollars according to the FBI and its various European counterparts? This piece of art that you have is simply a perfect facsimile of that piece, somehow rendered in paints of the same age and framed with wood of the same era and clearly not a copy but indeed an original Rembrandt—no, the exact Rembrandt—to which I am clearly referring?

So listen, art thieves… please stop stealing art. You’re more “Taking treasure away from the entire human family” than you are “Gonna make a sweet buck on this thing, mhmm.” But if you all insist on empowering these cultural robbers, here are the films to see:

The Thomas Crown Affair. Either the original or the remake will do fine, but beware that the remake should pretty much be called The Thomas James Bond Crown Affair. This film has it all, from crazy complicated set ups and schemes to a sexy rich thief and a vixen on his trail. And don’t let the fact that it’s pretty goddamn farfetched if you really think about it throw you.

Once A Thief. The film for those who prefer their art heists a bit more rife with wacky comedy. This film replaces some of the slickness of Crown with more laughs and more gunplay, while still keeping all the intrigue and plotting you people seem to like so much. Set (and shot) in Hong Kong and either dubbed or subtitled, FYI.

And let’s round out our recommendations with: Entrapment. This movie has all the trimmings you’d expect: high tech security measures and the thieves that breach them, sexy thieves, high stakes, etc. But let’s be fair: Sean Connery could make a film about stealing a sandwich awesome.

And now we turn to the real world. In October of 2012, seven paintings by the famed masters Picasso, Matisse, and Monet, (and a few others) that combined were (or… are) worth millions of dollars were taken from a gallery in Rotterdam. How did the crime go down? Let’s lay out the plan for you:

1. The thieves entered the art gallery.

2. They grabbed the paintings off the walls.

3. They ran outside again and got in some cars.

4. They drove off very fast.

And that was that. Similar story in Paris in 2010: a guy came in through a window, grabbed paintings, and left through the same window.

And why not keep things simple? Why complicate a plan with all the intrigue and cocktail parties and deception and flirtation and backroom dealings and all? Just because it’s awesome? Bah! True art thieves aren’t concerned with all that glamour, they’re concerned with money. And art is worth a lot of money, if you can find unscrupulous buyers. Which often you can’t, and the heists end up removing artwork from the community for good (or at least for a long time). But sometimes thieves can find people willing to pay for their ill-gotten masterpieces, and the temptation is enough to keep them at it.

Check out Museum of the Missing: A History of Art Theft by Simon Houpt, if you want a more thorough look at the history of art theft, and please, kids… don’t steal art! 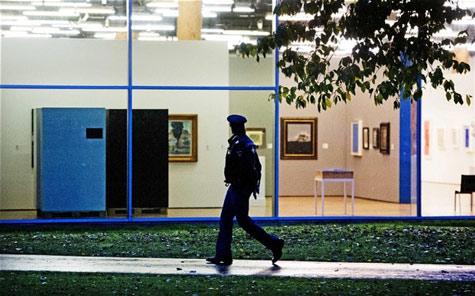