April 15, 2020
Join Stephanie Kane as she recounts how her novel, Quiet Time, and she herself were brought center-stage in a real-life cold case murder.

We all have stories that make us write. When we’re kids, something grabs us and won’t let go. For crime writers, maybe it’s an unsolved murder that made the moms in our neighborhood lock the doors. Or something quieter, more personal, that makes us question who we are and what we know. My story became my first mystery, Quiet Time.

The real facts were simple: A housewife—Betty Frye—was beaten to death in her garage in June 1973. I was engaged to her son. That day his dad paid us an unexpected visit with a bruise on his forehead and dressed in clothes too dark and heavy for the weather; looking for a restaurant for our wedding dinner was his alibi. He was arrested and his kids rallied around him. After the charges were dropped and he remarried a close family friend, a cone of silence descended. Nine years after Betty was killed, my own marriage ended.

When Bantam published Quiet Time in 2001, I was frank about its origins. Bantam’s legal team scoured the manuscript for identifying details. They made me fictionalize place names and move the plot up ten years. I published it under my second husband’s last name. It came out a week after 9/11 and quickly died. I was done with Quiet Time, but it wasn’t done with me.

In November 2005, a cold case detective e-mailed me. A crazy, one-shot-in-a-million thing: The killer’s 80-year-old sister had seen me talk about the book on a late-night rerun of a defunct public TV show. She read it and came forward with a confession he’d made. Was I willing to talk? A little voice said, at last.

The cold case brought its brand of justice and a measure of truth: knowing what happened in that garage and why. But it changed me as a writer.

In 1973 I’d been invisible. Now I was a witness. And Quiet Time was in the defense’s crosshairs. Claiming my novel was fact and not fiction, they subpoenaed it, my notes, and its more than twenty drafts. For the next eight years, in addition to testifying about that day in June, I defended my book. I also paid the price its catharsis had wrought. During those years, I didn’t write.

Betty’s murder thrust me into adulthood without making me an adult. So, too, did Quiet Time plunge me into being a writer without understanding the effect my words could have. I don’t regret writing it; when I got that e-mail in 2005, I felt a thrill of pride. The cold case brought its brand of justice and a measure of truth: knowing what happened in that garage and why. But it changed me as a writer.

When your notes are under threat of subpoena, you stop writing stuff down. If writing is how you think, your internal world shuts down. When that e-mail came across my screen, I’d been working on a legal thriller, the fourth in a series after the stand-alone Quiet Time. I put it aside and never went back. By the time I returned to writing, the cold case had hardened me. To the elderly aunt and Betty’s sisters, I was a hero. To the killer’s family—my former in-laws—I was a liar and a traitor. My voice is different now. Tidy endings are no longer mine, nor the luxury of allowing a story to take its time to unfold. Words count in a way they didn’t before.

As for Quiet Time? I’m setting it free by reissuing it. It did its job in the real world, a job neither of us intended. Now it belongs to the realm of fiction. A tender story of innocence lost in search of justice. A sweet ending, the kind I don’t write anymore. I haven’t changed a word. 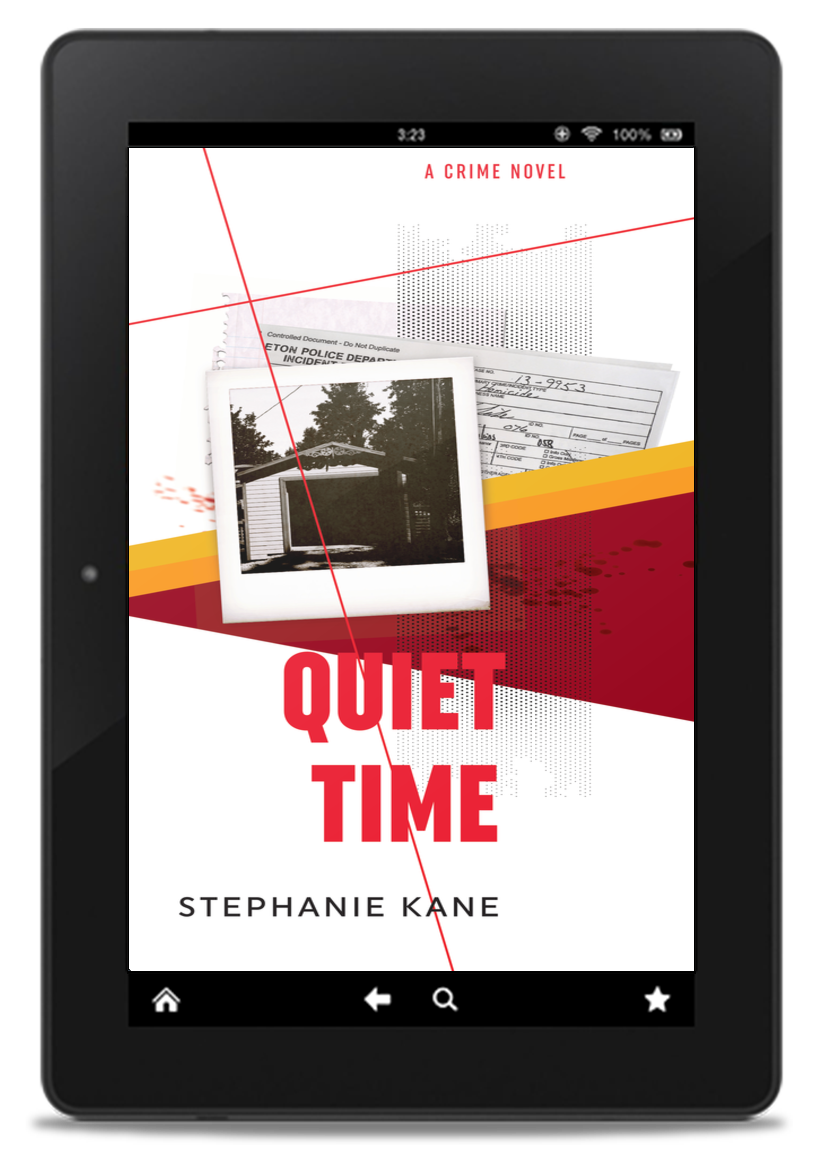 About Quiet Time by Stephanie Kane:

Inside his picture-perfect home, Warren Scott runs a tight ship. He demands total respect from his family. He’ll accept nothing less. The Scotts are quiet, they keep to themselves–and to the neighbors, they seem like any other family. Then the Scotts’ facade shatters one sun-drenched morning in May.

Sari Siegel is engaged to Tim Scott when his mother is found murdered. Sari barely knows the Scotts, but even she can sense the terrible secrets that seethe below the surface. Sari knows something about Peggy’s murder, but she isn’t telling… at least not yet. For if she does, her own dreams of a perfect life with Tim will shatter.

There are some family traditions no one wants to keep.

Stephanie Kane is a lawyer and award-winning author of four crime novels. Born in Brooklyn, she came to Colorado as a freshman at CU. She owned and ran a karate studio in Boulder and is a second-degree black belt. After graduating from law school, she was a corporate partner at a top Denver law firm before becoming a criminal defense attorney. She has lectured on money laundering and white-collar crime in Eastern Europe, and given workshops throughout the country on writing technique. She lives in Denver with her husband and two black cats.