🚨Remember to comment on this post for a chance to win a copy of Murder in Old Bombay! 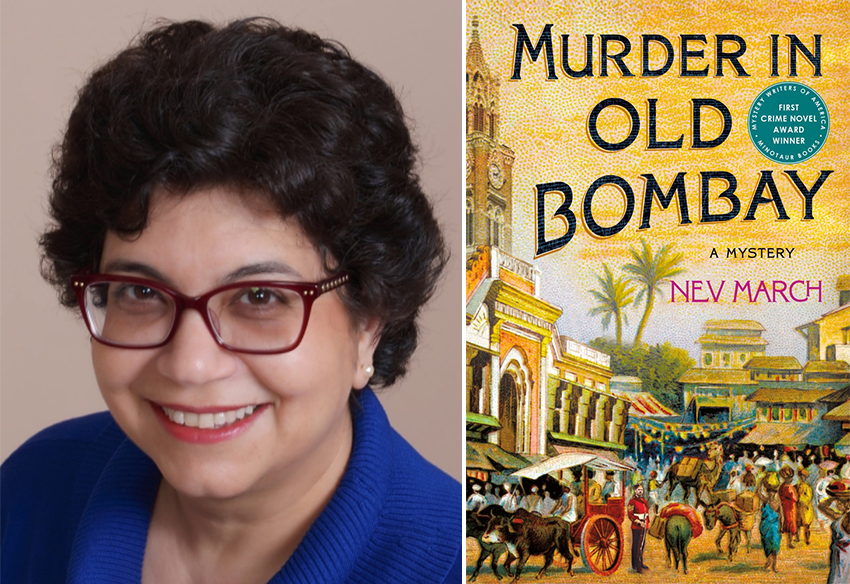 In the 1970s, as a teen in Mumbai I chafed against the restrictions my parents imposed: not allowed to travel alone, either walking or by public transport, nor visit new places with friends. Joining a college hiking trip, whether all girls or a mixed-gender group—was out of the question. In explanation, I was told, “Remember the Godrej girls!”

No-one said exactly what happened to the Godrej sisters, but I knew they’d fallen to their deaths from a clock-tower.

“—in broad daylight? In the middle of Bombay University?” I asked my Aunt Aban.

Checking that the other adults were out of earshot, she said, with a meaningful look, “They were accosted. Chose death over dishonor.”

We said no more about it.

In the ‘70s, my parents referred to this tragedy as though it had just happened. Only years later did I realize that these events occurred a century ago, in 1891! Yet the unsolved mystery remained in our collective memory, a wound that would not heal. As I researched the events in old newspapers and articles, I found a tragic love story and a mystery.

Born in the late 1800s, the well-to-do Godrej girls were sisters-in-law. The older, Bacha Godrej, was the 20-year-old bride of 22-year-old law student, Ardeshir Godrej. His 16-year-old sister, Pilloo Kamdin was already married, but had not been sent to her sasuraal (her husband’s home). These two young women had gone to the University that afternoon, climbed the 200 odd steps to the clock tower gallery, and first one, then the other, dropped to their deaths. Witnesses had seen an altercation between some young men in the hour before their women’s death, which led to an investigation and arrest.

As I researched these events, inconsistencies emerged: A person named Manek Aslaji was tried for murder, but acquitted for lack of evidence. His co-conspirators were never found. Manek’s jacket was said to be torn in a struggle on the clock-tower gallery, but the police could not locate it! A written message reported by his servant named two khoja Muslim men, but that message again, mysteriously disappeared. For those living at the time, each daily newspaper would have carried these details, leading to a frenzy of conjecture and outrage as the prospect of justice moved farther and farther away.

A more recent theory speculates whether the two girls were perhaps lesbian lovers. Homosexuality was taboo during the 1800s and would have horrified their families. So, the theory goes, the two girls chose suicide. When I learned that the two girls had not fallen at the same time, that theory seemed less credible: if it was suicide, wouldn’t they have jumped together, perhaps holding hands for courage during those last agonizing moments? Would modest, respectable Parsi girls, groomed from childhood to the dream of managing a great household, have chosen to die thus?

Doubt tugged at me, germinating the idea of writing a fiction novel to ‘solve’ this age-old mystery. Just so, my sleuth would discover these incongruities and be motivated to explore them. As my novel Murder in Old Bombay opens, Captain Jim recuperates in a hospital bed reading about the case in newspapers. Inspired by Sherlock Holmes, he’s puzzled at the inconsistent details reported. When he reads widower Adi Framji’s fervent letter to the editor, he becomes determined to solve the mystery.

A good detective must be able to search for the truth in every dark corner. Therefore, I chose to make Captain Jim an Anglo-Indian; this mixed heritage allows him to enter both worlds, the upper crust elite world of British and Parsi society as well as the more humble world of villages, farmers, laborers, and dock-workers. However, Anglo-Indians faced enormous discrimination because both Indian and British society frowned upon the mixing of races. And this led to the deeper theme in my book: race, and belonging.

These events occurred three decades after the 1857 Sepoy Mutiny, India’s first disorganized bid for Independence from Great Britain, when Indian soldiers rebelled, killing their white officers. In response, Bombay Regiments marched north to quell the rebellion. In the 1890s, the Mutiny would still have been vivid in people’s memory, from the burn of defeat to a confusion of divided loyalties. These simmering resentments form the backdrop of Murder in Old Bombay.

In addition, Conan Doyle’s stories were first published in the late 1880s. My sleuth Captain Jim’s penchant for disguise is based on his fictional hero Sherlock Holmes, who disguised himself as a sailor, an old mariner, and a drunken groom, and that’s just in The Sign of Four! Taken with these shenanigans, Captain Jim wonders whether such disguises could really work? My research showed they could: Thomas Henry Kavanaugh was one of only five civilians to ever receive the Victoria Cross medal of valor. A painting in London’s National Army Museum shows Kavanaugh, assistant commission of Bengal civil service being disguised during the Siege of Lucknow. Dressed as a Punjabi in turban and beard, he escaped through the city to bring aid to his beleaguered comrades.

Another real-life sleuth from the period is Charles J. Forgett, Deputy Commissioner of Police during the Sepoy Mutiny of May 1857. At the time, Bombay was the commercial mainstay of British India, intensely loyal to England. If the mutineers won over Bombay regiments, history would have been very different! As the Mutiny spread, approaching Bombay, residents must have been terrified: only a few miles away the Sepoys of the 27th Bombay Regiment revolted in Kolhapur, joining the militia from the nearby Princely States. Bombay was close to being drawn into a civil war.

That October, Charles Forgett, an Anglo-Indian “born and brought up in India who spoke Hindustani like a native” and accustomed to wander the city in disguise, overheard a group of mutineers planning to rebel during the annual Divali celebration. Some reports state that Forgett surveilled the group in a coffee shop; another report claims he made holes in a plaster wall and listened, then brought the Regiment’s officers to hear their trusted Sepoys planning to betray them. In any case, six conspirators were apprehended, two were executed and the others exiled to the Andamans. For his daring role in “saving the city by suppressing the Mutiny”, the Parsi and other residents of Bombay took up a collection and gifted Mr. Forgett the magnificent sum of 19,000 pounds sterling in gratitude. My extended family lives on Forgett Street, a road in Gowalia Tank, Mumbai that still bears his name. In my book, that’s where Captain Jim lives, in a tiny room behind a bakery, where he can slip in and out wearing his disguises.

For the survivors of that real-life tragedy, life was never the same. Devastated by the loss of his bride, that youth, Ardeshir Godrej threw himself into his work, and is now famous as the inventor-founder of the enormous conglomerate, Godrej Enterprises. He did not re-marry. Despite enormous pressure from the wealthy Parsi community—two petitions to the high court, each with tens of thousands of signatures—the mystery of his wife and sister’s deaths was never solved.

So what did happen to the Godrej girls? My novel explores what could have happened, its plot woven from the quandaries and social pressures of the time. Fact is, we will never know for certain. After their deaths, The Rajabai clock tower was permanently closed to the public. Within the Parsi community, the ever-present threat of harm to women became codified in that simple phrase, “Remember the Godrej girls!” which resonates even today. Alas, historical fiction isn’t historical at all, and may not be entirely fiction.

Comment below for a chance to win a copy of Murder in Old Bombay!

The Murder in Old Bombay Comment Sweepstakes: NO PURCHASE NECESSARY TO ENTER OR WIN.  A purchase does not improve your chances of winning.  Sweepstakes open to legal residents of 50 United States, D.C., and Canada (excluding Quebec), who are 18 years or older as of the date of entry.  To enter, complete the “Post a Comment” entry at https://www.criminalelement.com/a-hundred-year-old-unsolved-crime-inspires-a-crime-novel-and-a-personal-journey-by-nev-march/ beginning at 9:00 a.m. Eastern Time (ET) November 5, 2020. Sweepstakes ends at 8:59 a.m. ET November 19, 2020. Void outside the United States and Canada and where prohibited by law. Please see full details and official rules here. Sponsor: Macmillan, 120 Broadway, New York, NY 10010. 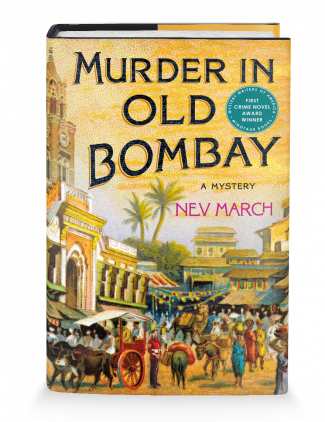 About Murder in Old Bombay by Nev March:

In 1892, Bombay is the center of British India. Nearby, Captain Jim Agnihotri lies in Poona military hospital recovering from a skirmish on the wild northern frontier, with little to do but re-read the tales of his idol, Sherlock Holmes, and browse the daily papers. The case that catches Captain Jim’s attention is being called the crime of the century: Two women fell from the busy university’s clock tower in broad daylight. Moved by Adi, the widower of one of the victims — his certainty that his wife and sister did not commit suicide — Captain Jim approaches the Parsee family and is hired to investigate what happened that terrible afternoon.

But in a land of divided loyalties, asking questions is dangerous. Captain Jim’s investigation disturbs the shadows that seem to follow the Framji family and triggers an ominous chain of events. And when lively Lady Diana Framji joins the hunt for her sisters’ attackers, Captain Jim’s heart isn’t safe, either.

Nev March is the winner of the Minotaur Books/Mystery Writers of America First Crime Novel Award. Leaving a long career in business analysis in 2015 she returned to her passion, writing fiction. She is a member of the Mystery Writers of America and the Hunterdon County Library Write-Group. A Parsee Zoroastrian herself, Nev lives with her husband and two sons in New Jersey. Murder in Old Bombay is her debut novel.