March 16, 2014
Cold Caller by Jason Starr is a ravingly readable tale of a downwardly mobile yuppie in the telemarketing business who'll kill to get ahead . . . 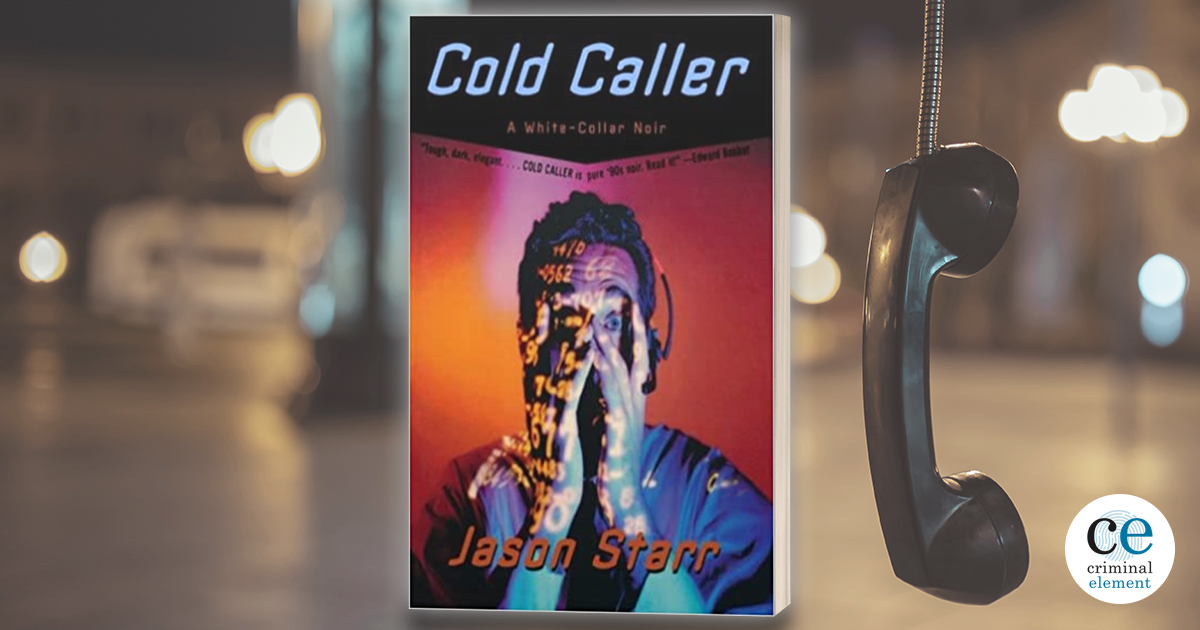 I can be a pretty difficult guy to get along with sometimes.

Umm, yeah.  That understatement is made by Bill Moss, the narrator and protagonist of Jason Starr’s first novel Cold Caller. Initially released in 1997 by No Exit Press of the U.K. and then published in the U.S. by Norton the following year, Cold Caller is a savage, nightmarish work of contemporary urban noir. Comparisons to Jim Thompson immediately abounded. Starr was just beginning what continues to be a celebrated career.

But about that debut. So, Moss is a guy who has an M.B.A. and who currently resides in New York City. He used to hold a high-level advertising job, but that gig came to an end and now he’s a telemarketer. The phone “cold calling” job was only supposed to be something to keep a paycheck coming in while he looked for another position more suited to his skill set. But at the time of the story he’s been stuck doing the menial work for two years. He’s good at it, but what business school grad wants to be a time clock-punching phone pest? In his personal life Moss has a live-in girlfriend. He and his steady are both in their early 30s. She’s ready for the altar but Moss says he only wants to get married after he’s gotten his career back on track. In the meantime he can’t get it up for her, although he still finds her attractive. And he’s obsessed with having a foray with a prostitute.

This early part of Moss’s narration offers a glimpse of his lifestyle and mindset, as well as the intensity of the story:

Without saying goodbye to anyone, I left the office.

On Eighth Avenue, a beggar in front of a triple-X video store asked me for change, a drug dealer offered me crack, a tourist asked me for directions to Times Square. I ignored everyone. My forehead hurt and the heat was unbearable. It must have been a hundred degrees already and it wasn’t eleven o’clock yet.

I thought about stopping at a phone booth and calling Julie at work and telling her about my morning, but I figured she’d still be angry at me because of our fight last night. I didn’t feel like making up with her, not yet anyway. I crossed Forty-fourth Street with a crowd of people, wondering what to do with the rest of my life.

Like many of Starr’s most compelling characters, Moss has personality issues. To say he has an anger management problem is to show great restraint in your take on his being. The guy’s got a fuse about as long as the smallest matchstick—once it’s been broken in half. He has violent impulses, lies when it suits him, gets in fights with his girlfriend, his boss at work, strangers on the subway, etc. Ready to invite him over for dinner?

But what makes Moss’s character, and the book in general, so intriguing is that he’s not just a clear-cut a-hole. He’s good to his woman at times, supportive and thoughtful. He sticks up for a black co-worker who is the victim of race discrimination at work. He would probably help a little old lady cross the street, that is unless he was too busy throttling a passerby who bumped into him on the sidewalk. It’s these inconsistencies in Moss that make him so real, and through which Starr keeps the reader guessing.

Something else that brings Moss fully to life are the details of his existence that Starr provides. This is one of my favorite aspects of Starr’s writing. He always describes things like what exactly a character is wearing at a given moment, particulars about what they eat and drink, etc. That might be Writing 101 but he just does it better than most. You see the people in his books, feel them next to you; often uncomfortably so. Here, Moss describes a typical, post-work afternoon for himself:

When I got home, I called Julie to see when she was getting off work. She wasn’t in so I left a message on her voice mail. I showered, then cooked some noodles and cheese the way I liked it, with an extra slice of American cheese cooked into it. I sat in front of the T.V. and ate the food out of the pot.

I’d spent a lot of afternoons this way over the past two years. When I didn’t work extra hours I was home by two, and I usually did all my resume sending on Mondays. Sometimes I took walks in the park or went to the movies, but on most days I came home, cooked a cheap lunch, and started watching talk shows and soap operas on television.

I hated my routine, but I had no hobbies or anything else to keep me busy. I hadn’t worked out or played sports since college and I didn’t have the attention span to read books.  Some days I thought I was the biggest loser in the world.

In addition to getting to know their habits, you also see and feel the escalating traumas that frequently occur in Starr’s characters’ lives. There’s a lot of distress at play between the pages of Cold Caller; challenging, disturbing situations involving Bill Moss and his girlfriend, Bill and the people he works with, Bill and a prostitute, Bill and strangers unlucky enough to cross his troubled path. I don’t want to go into the details of the cycle of events that drives this story, for fear of ruining the suspense for readers new to the book. But suffice to say it’s the stuff of big city, angst-ridden terror. And it’s pure noir, as dark and as fierce as the most volatile pages from the novels of the afore-mentioned Thompson. It introduced a new, strong voice in the world of edgy crime fiction—a voice that only got stronger from there.