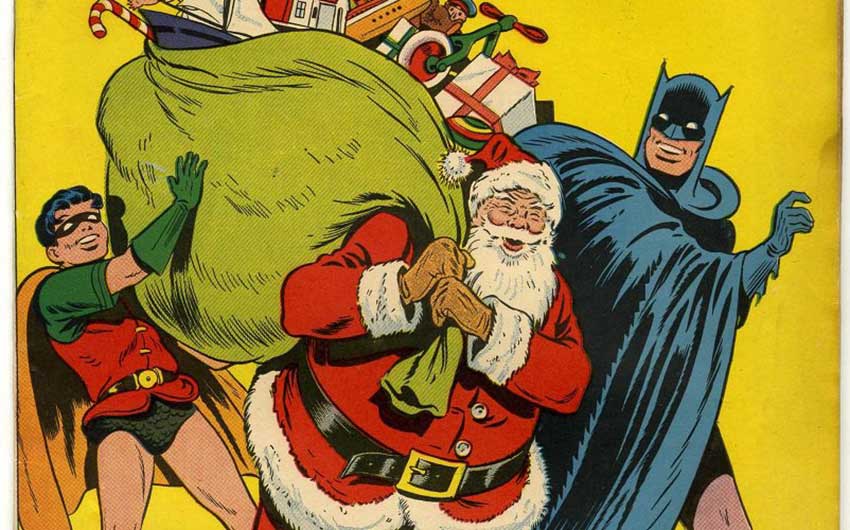 The Holidays are supposed to be a time of peace on Earth and goodwill towards everyone, but as popular culture has shown us, some people view them as a season of sinister opportunity. So, some of the most fun and enjoyable Christmas tales are the ones where we get thrilling confrontations between valiant heroes and the vile villains looking to exploit, poison, and pervert the Yuletide season. It’s why so many people consider Die Hard a Christmas film. It’s also why when Christmas Eve arrives in Gotham City, Santa isn’t the only one prowling rooftops.

At first glance, Batman seems like an odd fit for a story set at Christmas time, but over the course of the character’s 76-year history, Bill Finger and Bob Kane’s Dark Knight Detective has had plenty of Christmas set adventures. This Holiday Hero is not just reserved for the comics but also appears in other media like television, film, and even video games. In this piece, we’ll look at why the holidays are such an interesting time to set a Batman story and some of the more memorable and recent examples of the Dark Knight’s Yuletide adventures.

Longevity is certainly one of the reasons why Batman has had so many Christmas adventures. When you’ve been around for almost eight decades, you’re bound to revisit familiar and popular settings. However, I don’t think that’s the only reason why there have been so many Batman stories set at Christmastime. I think there are two other factors at play as well.

The first is, as a comic book character, Batman’s adventures are meant to be visual in nature, and the Holiday season is a feast for the eyes. The darkness of winter is illuminated by beautiful colored lights as snow turns the ground into an ivory blanket. When you juxtapose the bright and often ethereal beauty of the Christmas season against the “Dark Knight” and the gothic city he calls home, you get some amazing and haunting visuals.

And what is Batman if not that idea on a grand scale? Bruce Wayne struggles year round, as both himself and the Dark Knight, to make his hometown a better place. So it’s natural to tell a Batman story set during a time when the idea of giving and making a difference is given a special spotlight.

Now that I’ve examined some of the reasons why Holiday set Batman stories are so interesting and enduring, let’s take a look at some of the more memorable and recent examples of them in comics, movies, TV, and video games. We’ll start with comics since that’s where Batman began.

During the course of his almost eighty years in existence, Batman has been many different things to many different people. So, his Christmas-set stories come in a variety of flavors and tones—from whimsical and humorous to hard-hitting and horrific.

The first one I recall reading was a short story by Denny O’Neil and, unbeknownst to me at the time, the man who would go on to revolutionize Batman comics, Frank Miller. It was called, “Wanted: Santa Claus—Dead or Alive.” It was originally published in 1980, but I first read it when it was reprinted in a later holiday-themed anthology. It’s a fun crime tale involving the Dark Knight, an ex-con-turned-department-store-Santa, and a robbery on Christmas Eve. Another highly enjoyable Christmas Batman tale is Lee Bermejo’s beautifully illustrated graphic novel, Batman: Noel—a take on Dickens’s A Christmas Carol with Batman in the role of Scrooge. The story is packed with haunting imagery, and over the course of the narrative, we get exciting, poignant, and even humorous moments. Reading it has become a holiday tradition for me.

If you’re more in the mood for a Christmas film, you’ll definitely want to make 1992’s Batman Returns part of your Christmas viewing. For some people, 1989’s Batman, featuring Jack Nicholson as the Joker, is the best of the Tim Burton directed Batman films, but I’ve always preferred Returns.

In the film, Burton and cinematographer Stefan Czapsky expertly utilize the Christmas season as a backdrop for their tale. You get great examples of the juxtaposition I talked about earlier, and the result is a haunting and beautiful film.

Plus, the movie features some great, fun performances. Michael Keaton is given more to do as both Bruce Wayne and Batman in this film—and who can forget Michelle Pfeiffer’s excitingly fierce Catwoman or Danny Devito’s sinister and grotesque Penguin?

Batman: The Animated Series — “Christmas with the Joker”

If you’re looking for TV Christmas specials, you’ll definitely want to check out the 1992 episode of the award-winning and critically acclaimed, Batman: The Animated Series, titled “Christmas with the Joker.” It’s a fun story where Robin’s attempt to get Batman into the Holiday spirit is derailed by the Joker hijacking the airwaves to host his own Christmas Special and creating havoc all around the city.

I prefer “Christmas with the Joker,” but five years later, The New Batman Adventures animated series did a fun Christmas-themed episode as well, titled “Holiday Knights.” It’s actually three short tales: one set on December 22, pitting Batman against Harley Quinn and Poison Ivy; one on December 24th where Batgirl goes toe to toe with Clayface; and one set on December 31st where Batman and Robin try to foil the Joker’s fiendish plan to ring in the New Year.

Finally, if you’re a gamer who prefers a more hands-on approach to Batman’s adventures, and you’re looking for a holiday tale, you’ll definitely want to check out Batman: Arkham Origins—a 2013 video game set on Christmas Eve and early during the Dark Knight’s career.

In the game, you take control of Batman as he sets out on Christmas Eve to deal with street crime, a police department that views him as a dangerous vigilante, and the army of costumed and colorful assassins looking to claim the massive bounty the Gotham underworld has put on his head.

People who played the previous Batman Arkham games won’t find a whole lot of new gameplay elements in Origins, but the story is exciting and the setting is beautiful.

If you’ve never played a Batman video game before, do yourself a favor this Holiday Season and give Arkham Origins a try. The combat system is fun, and Batman is equipped with all sorts of high-tech crime solving and fighting gear. You will feel like you’ve donned the Dark Knight’s cowl and are soaring through the snowy, Gotham night in pursuit of a dangerous criminal.

So, if you’re like me and you’re looking for action and adventure this holiday season, Batman has got you covered in a variety of different mediums. All you’ve got to do is sit back, pick up a comic, controller, or a remote, and enjoy the adventures of a Dark Knight fighting to keep the light of the holiday season from going out in the city he loves.