October 23, 2020
Author Rose Carlyle has always been fascinated by twins and their representation in media, so she lists six of her favorite novels featuring scary twins for you to read right now!

Everyone loves twins. When parents of twins set out for their first walk with their new babies bundled up in a double stroller, they quickly learn just how popular twins are. Passers-by comment that they are “doubly blessed” and that twins will be “twice the fun.” Yet in fiction, a more sinister view of twins is often explored. Most singletons don’t understand the bond between two people who shared their mother’s womb, and it’s human nature to mistrust things we don’t understand. The potential for deception in the case of identical twins only adds to our sense of unease. It’s unusual and unsettling to be unsure who you’re talking to.

When I was a child, my sister, Maddie, and I were often compared with our aunts who were twins. Maddie and I wished we were twins, but Maddie was born two years ahead of me. What fun it would have been to swap clothes, be in the same ballet class, and share a birthday. But not only were we different ages, we looked so different that many people struggled to believe we were even related. Maddie was a green-eyed blonde; I was a pale, blue-eyed brunette. We also had divergent tastes and distinct personalities.

All our differences aside, Maddie and I came together in an important way recently. For a long time, I dreamed of writing a novel about identical twins. So I was astonished when I discovered that Maddie also wanted to write a novel—and she also wanted to write about twins. One day, we put our ideas together, and what emerged was a sizzling plot that I couldn’t wait to get down on paper. Fortunately, Maddie stepped aside for me to write the novel. She took the role of editor, cheerleader, and critic, and together we created The Girl in the Mirror.

It’s ironic that, after years of wishing I had an identical twin, it turned out that the strength of our sisterly writing team lay in our differences. Maddie came at the story from a commercial angle, informed by her love of blockbuster movies, while I brought my experience of sailing and raising a family. It was only after I had finished writing that I realized how many other thriller writers have played with the twin trope. Here are six outstanding examples of twins in fiction, all of them with a touch of the uncanny. 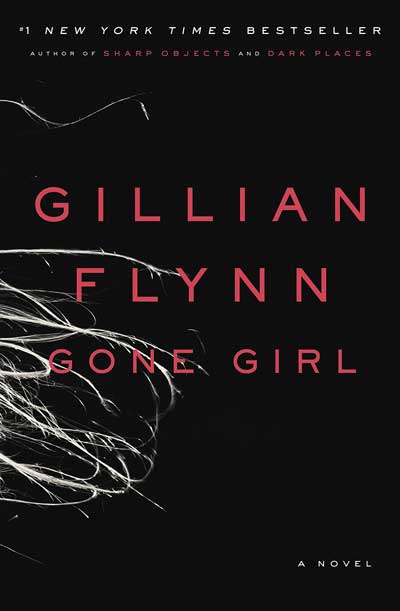 The twins in Flynn’s phenomenally successful thriller are not identical, but their being twins is vital to the plot. It’s hinted that the mysterious life-long bond between the hero, Nick, and his twin, Margo, is the reason Nick might have sided with his sister against his missing wife, Amy. Nick’s strange nickname for his twin, Go, is one of many subtle hints that this is no ordinary sibling relationship but, rather, a connection that we mere singletons can never understand.

The Double by Fyodor Dostoevsky 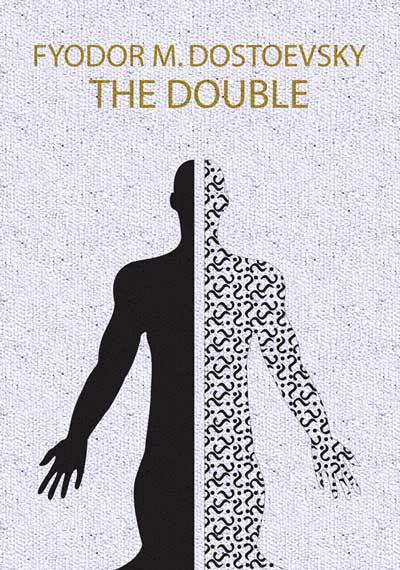 Dostoevsky wrote The Double early in his career and later said it wasn’t his best work, but the premise is so captivating that it’s been adapted into several movies—most recently the 2013 version starring Jesse Eisenberg and Mia Wasikowska. The hero, Jacob Golyadkin, is a struggling, self-doubting clerk whose career begins a downward spiral when a man who shares his name and his face gets a job in his office. Jacob tries to befriend the newcomer despite the double’s discourteous behavior, which includes disappearing from a restaurant leaving Jacob to pay the bill after consuming no fewer than 10 pies. The double’s infractions are small and almost comical, yet there is a nightmarish quality to the story—perhaps because Jacob can’t convince anyone else that the double has nefarious motives. Jacob even, hilariously, gets blamed for having a double. His friends tell him that it’s something honest people never do. But this is Russian literature, so you just know that things are going to get seriously bad, especially once Jacob’s beautiful fiancée gets caught up in the deception.

A Tale of Two Cities by Charles Dickens 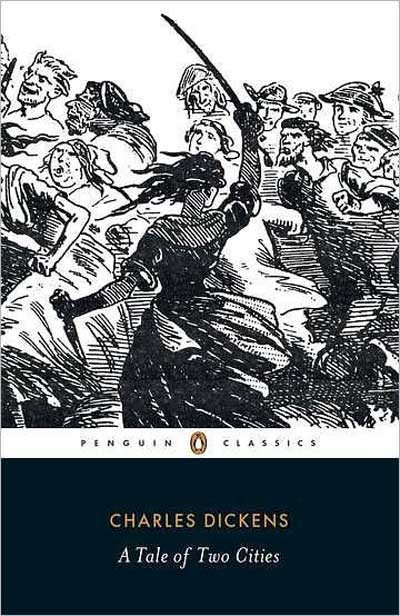 Doubleness is everywhere in this classic tale, from the two cities, London and Paris, to the two male characters, hero and anti-hero, who happen to look exactly alike. The opening words are among the most famous in all literature, “It was the best of times, it was the worst of times.” (The final sentence is widely thought to be equally brilliant, but I won’t spoil it here.) There is no supernatural or creepy element in this tale; Charles Darnay and Sydney Carton simply look alike by an accident of fate. This is historical fiction with a dash of crime, a brilliant plot twist, and a heart-wrenching, unforgettable ending.

The Third Twin by Ken Follett 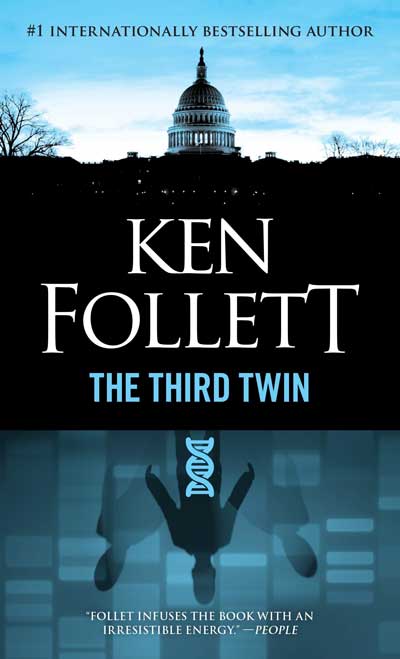 I love the paradox in the title of this thriller with a sci-fi twist. You might feel that the name of the novel spoils the plot twist, but of course, there is much more to the story than the emergence of not two but three lookalike characters. Like many doppelgänger stories, the novel explores whether people who are genetically identical can be different in character. If one twin is good and the other evil, how did this difference come about? And can the twins change their destiny?

The Woman in White by Wilkie Collins 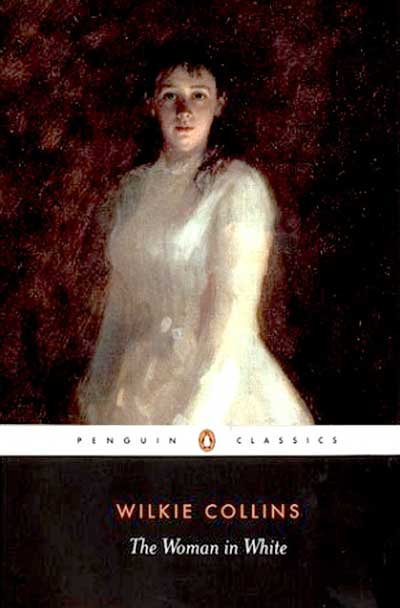 Collins virtually invented the thriller genre with this, his best-known novel. The plot centers around Laura Fairlie and the troubled “woman in white” who looks astonishingly like her. A great villain, high stakes, and a plot twistier than a snake in a maze have ensured that this novel is as popular today as when it was first published in 1859. There have been 14 screen versions, and given that the thriller genre is often criticized for its depiction of women as victims of violent crime, it’s worth noting that The Woman in White has long been applauded for drawing attention to the plight of married women under the unfair laws of the day. It’s a proto-feminist work and a great read.

Her Fearful Symmetry by Audrey Niffenegger 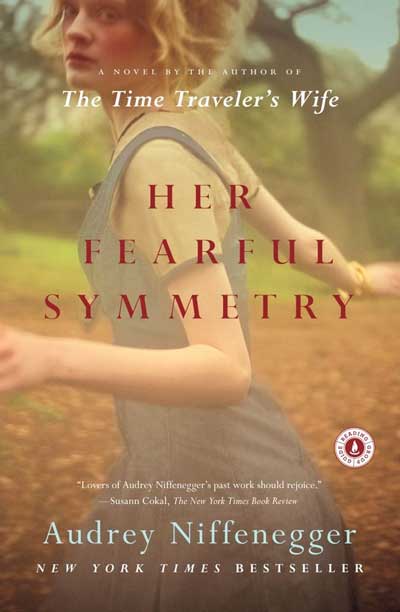 The author of the beloved romance The Time Traveler’s Wife decided to switch it up with this novel, which features not one but two sets of identical twin sisters. The relationship between the younger twins, Julia and Valentina, is troubled and dark, but when the truth about their own mother’s relationship with her twin sister is revealed, you can see why. Set around a London cemetery, the novel combines supernatural elements with very humanly bad behavior. This is no romance novel, though, and the sinister ending certainly left readers divided. 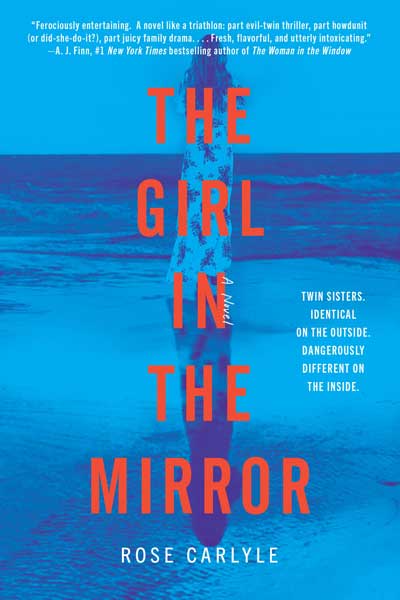 About The Girl in the Mirror by Rose Carlyle

Twin sisters Iris and Summer are startlingly alike, but beyond what the eye can see lies a darkness that sets them apart. Cynical and insecure, Iris has long been envious of Summer’s seemingly never-ending good fortune, including her perfect husband Adam.

Called to Thailand to help her sister sail the family yacht to the Seychelles, Iris nurtures her own secret hopes for what might happen on the journey. But when she unexpectedly finds herself alone in the middle of the Indian Ocean, everything changes. When she makes it to land, Iris allows herself to be swept up by Adam, who assumes that she is Summer.

Iris recklessly goes along with his mistake. Not only does she finally have the golden life she’s always envied, with her sister gone, she’s one step closer to the hundred-million-dollar inheritance left by her manipulative father. All Iris has to do is be the first of his seven children to produce an heir.

Iris’s “new” life lurches between glamorous dream and paranoid nightmare. On the edge of being exposed, how far will she go to ensure no one discovers the truth?

And just what did happen to Summer on that yacht?