Books have the tendency to give you all the feels, good and bad, but there is no worse feeling than the one you get when your favorite character dies. No matter how foolish it may be, you secretly hope certain book characters you like get resurrected, just so you could have more stories about them.

Hey, if it worked for Sherlock Holmes fans, then it could work for you, too, right?

When Arthur Conan Doyle decided to focus on his historical novels and kill off his beloved detective, Sherlock Holmes, at the end of “The Final Problem” story, fans were outraged. It took eight years, but eventually the outcry for more Sherlock convinced Conan Doyle to bring the detective mastermind back to life. Thanks to his resurrection, we got some of Sherlock’s best stories, including the ones in The Hound of Baskerville and The Return of Sherlock Holmes.

Easter is upon us, so what better time than now to talk about these 6 book characters you wished would be resurrected? You never know, miracles do happen. It seems like no matter the world, no matter the timeline, Jake Chambers—the blond haired, blue eyed symbolic son of Roland from Stephen King’s Dark Tower series—is meant to die. His fate has been altered and changed many times before, but I’d love to see him resurrected, once again, to finish out the series King never quite seems to be done with. You know going into a spy novel that not everyone is going to make it out alive, but wouldn’t it be amazing if Leamus, and maybe even Liz, lived at the end of The Spy Who Came in from the Cold? Leamus’s adventures could have continued, with his lover at his side, or, more likely, with a new lover entirely. When a book is as good as John le Carre’s classic spy novel, readers can’t help but wish for a sequel. Who knows, maybe Leamus survived East Germany after all? It seems like Stephen King is great at killing off my favorite characters. In The Green Mile, Paul Edgecomb gets to live until he’s 108, while John Coffey gets executed for a crime he didn’t commit. Part of me has always been waiting for a sequel where we find out that John’s powers are stronger than you ever knew and he actually brought himself back to life. It certainly wouldn’t be the strangest thing to happen in King’s work. Listen, I know there are a lot of tragic deaths in the George R. R. Martin books series, and even more on the HBO show Game of Thrones, but to me, there is no one I would like to bring back more than Eddard Stark. I’m still angry about how he died, because I really thought he’d end up on the Iron Throne someday. Smart, noble, and brave, Ned could be resurrected to save his family (what’s left of it) and bring some peace and sanity to Westeros. Like the A Song of Fire and Ice series, The Walking Dead comics—and show—tend to kill off your favorite characters pretty regularly, but I think I am still drying my eyes over Hershel’s devastating demise. The true moral center of Rick and company, Hershel was a beacon of hope, even at the group’s lowest time. If only he could come back to life as a non-zombie… 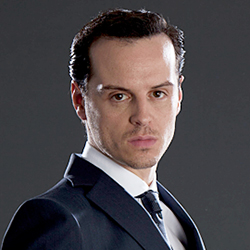 Okay, I know there won’t be any new stories from the deceased Arthur Conan Doyle, but what about all those adaptations of his work? Whoever decides to take on the next Sherlock Holmes project should reconsider bringing Professor Moriarty back to life. He’s a criminal mastermind that's perfectly matched for Holmes, and a new and exciting game of cat-and-mouse featuring these two is the stuff of a mystery-lover’s dream.

Which characters would you resurrect, given the opportunity?