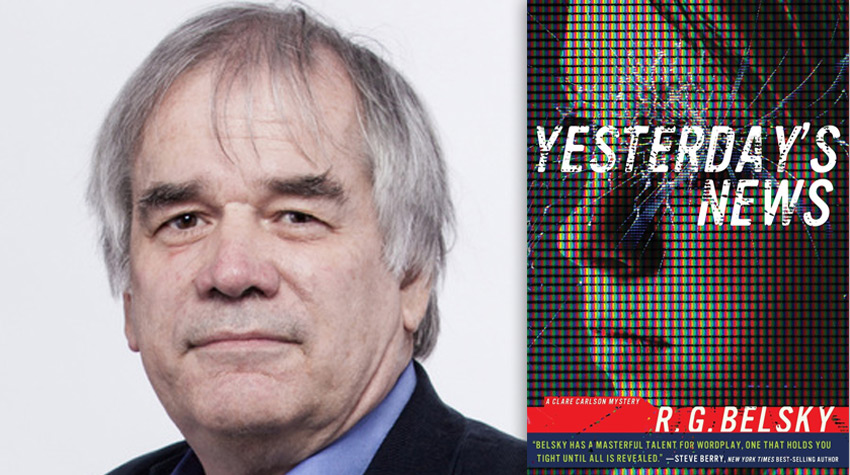 I’ve spent most of my life covering the news as a journalist. I worked at the New York Post, New York Daily News, Star magazine and NBC News. I was there for all of the big crime stories over the past several decades: Son of Sam, O. J. Simpson, John Lennon, Jon Benet, and so many others.

My newest suspense thriller, Yesterday’s News, is about a TV journalist obsessed with finding out the answers to a legendary missing child cold case. Before that, I wrote a series about a New York City newspaper reporter who breaks Page 1 crime stories. I like to write about what I know.

So whenever people have asked me where I got the ideas for my mystery novels, I always give them the same answer: “Hey, I just went to work in the newsroom every day!”

The most sensational serial killer case ever. Loner postal employee holds a city in terror for a year, randomly shoots women and young couples on the streets of New York, talks to a dog, writes taunting letters to the media, and is eventually caught because of a simple parking ticket. What mystery writer could make up a story like that? Well, I tried. My suspense thriller Blonde Ice (2016) is about a blonde woman serial killer who targets men for death the same way Son of Sam used to do with women. One reason I did this is that there have been very few women serial killers who murder just for the thrill of it—either in real life or fiction—so I created one based on some of my memories from covering the Son of Sam murder spree.

The Disappearance of Etan Patz

My latest mystery, Yesterday’s News, is about the disappearance of an 11-year-old girl named Lucy Devlin off the streets of New York City. As a young journalist, I covered the legendary case of Etan Patz, a 6-year-old boy who vanished on his way to school. For years afterward, there were false leads and false hopes that he might somehow still be alive. But finally, a man was convicted for the murder of Etan Patz, which at least gave his grieving family some kind of closure. My book is about a different kind of missing child case in which there is no closure for anyone involved—including my reporter covering the story, Clare Carlson—and about how, when that happens, it can be a tragedy even worse than murder.

The shooting of John Lennon outside his New York apartment was a horrifying event, but there was no real mystery about it. The killer, Mark David Chapman, was a deluded stalker who killed the former Beatle for no apparent reason. But when I wrote my own celebrity murder mystery—about a Hollywood actress murdered on the street, similar to the way Lennon died—I decided to do a “what if?” What if the stalker didn’t really do it? What if there was another reason why it happened? What if there were other celebrity victims killed for the same reason? The result was my mystery novel Shooting for the Stars.

The new book I’m working on now, The Perfect Victim, is about a high-profile woman crime victim who wants to find out what actually happened to her. Probably the most famous real-life New York City crime victim was the Central Park Jogger—a story I covered back in the late ‘80s. She was a young woman brutally attacked and left for dead while jogging in Central Park. Five men went to jail for the crime but were later exonerated, and another man was eventually convicted. I decided to write a fiction story about a woman victim like that who is determined to find out the truth about her case.

This is the most famous—or infamous—tabloid headline ever, and I was part of the New York Post newsroom that produced the story. It was about a man who held up a topless bar, shot the owner to death, and then cut off the victim’s head and took it with him for some inexplicable reason. Yep, you heard that all right. So how is this an inspiration for my mystery novels? It shows that any fictional scenario I write—no matter how far-fetched and implausible it might seem—is possible. I mean if “Headless Body in Topless Bar” really happened, then I can make up anything on the pages of my novels!

Read an excerpt from Yesterday’s News!