This week is a week of threes! Becky Masterman released the thrilling 3rd installment in the Brigid Quinn series, and Greg Iles also published the final installment in the Natchez Burning Trilogy, a suspenseful thriller that will leave your heart racing. See what else this week brings in the way of books:

A Twist of the Knife by Becky Masterman

Ex-FBI agent Brigid Quinn, now happily settled in Tucson, doesn’t visit her family in Florida much. But her former partner on the force, Laura Coleman―a woman whose life she has saved and who has saved her life in turn―is living there now. So when Laura calls about a case that is not going well, Brigid doesn’t hesitate to get on a plane.

On leave from the Bureau, Laura has been volunteering for a legal group trying to prove the innocence of a man who is on death row for killing his family. Laura is firmly convinced that he didn’t do it, while Brigid isn’t so sure―but the date for his execution is coming up so quickly that they’ll have to act fast to find any evidence that may absolve him before it’s too late…

Read an excerpt from A Twist of the Knife!

The Outsider by Anthony Franze

Things aren't going well for Grayson Hernandez. He just graduated from a fourth-tier law school, he's drowning in student debt, and the only job he can find is as a messenger. The position stings the most because it's at the Supreme Court, where Gray is forced to watch the best and the brightest—the elite group of lawyers who serve as the justices' law clerks—from the outside.

When Gray intervenes in a violent mugging, he lands in the good graces of the victim: the Chief Justice of the United States. Gray soon finds himself the newest—and unlikeliest—law clerk at the Supreme Court. It's another world: highbrow debates over justice and the law in the inner sanctum of the nation's highest court; upscale dinners with his new friends; attention from Lauren Hart, the brilliant and beautiful co-clerk he can't stop thinking about.

But just as Gray begins to adapt to his new life, the FBI approaches him with unsettling news. The Feds think there's a killer connected to the Supreme Court. And they want Gray to be their eyes and ears inside One First Street. Little does Gray know that the FBI will soon set its sights on him.

Racing against the clock in a world cloaked in secrecy, Gray must uncover the truth before the murderer strikes again

Read an excerpt from The Outsider!

The endgame is at hand for Penn Cage, his family, and the enemies bent on destroying them in this revelatory volume in the epic trilogy set in modern-day Natchez, Mississippi—Greg Iles’s epic tale of love and honor, hatred and revenge that explores how the sins of the past continue to haunt the present.

Shattered by grief and dreaming of vengeance, Penn Cage sees his family and his world collapsing around him. The woman he loves is gone, his principles have been irrevocably compromised, and his father, once a paragon of the community that Penn leads as mayor, is about to be tried for the murder of a former lover. Most terrifying of all, Dr. Cage seems bent on self-destruction. Despite Penn's experience as a prosecutor in major murder trials, his father has frozen him out of the trial preparations—preferring to risk dying in prison to revealing the truth of the crime to his son.

During forty years practicing medicine, Tom Cage made himself the most respected and beloved physician in Natchez, Mississippi. But this revered Southern figure has secrets known only to himself and a handful of others.  Among them, Tom has a second son, the product of an 1960s affair with his devoted African American nurse, Viola Turner.  It is Viola who has been murdered, and her bitter son—Penn's half-brother—who sets in motion the murder case against his father.  The resulting investigation exhumes dangerous ghosts from Mississippi's violent past. In some way that Penn cannot fathom, Viola Turner was a nexus point between his father and the Double Eagles, a savage splinter cell of the KKK. More troubling still, the long-buried secrets shared by Dr. Cage and the former Klansmen may hold the key to the most devastating assassinations of the 1960s. The surviving Double Eagles will stop at nothing to keep their past crimes buried, and with the help of some of the most influential men in the state, they seek to ensure that Dr. Cage either takes the fall for them, or takes his secrets to an early grave.

Tom Cage's murder trial sets a terrible clock in motion, and unless Penn can pierce the veil of the past and exonerate his father, his family will be destroyed. Unable to trust anyone around him—not even his own mother—Penn joins forces with Serenity Butler, a famous young black author who has come to Natchez to write about his father's case. Together, Penn and Serenity—a former soldier—battle to crack the Double Eagles and discover the secret history of the Cage family and the South itself, a desperate move that risks the only thing they have left to gamble: their lives.

Take a look at Kristen Houghton's review of Mississippi Blood!

Mia Haas has built her life far from the North Dakota town where she grew up, but when she receives word that her twin brother is missing, she is forced to return home. Back to the people she left behind, the person she used to be, and the secrets she thought she’d buried.

Once hailed as the golden boy of their town, and now a popular high school teacher, Lucas Haas disappears the same day the body of one of his students is pulled from the river. Trying to wrap her head around the rumors of Lucas’s affair with the teen, and unable to reconcile the media’s portrayal of Lucas as a murderer with her own memories of him, Mia is desperate to find another suspect.

All the while, she wonders: If he’s innocent, why did he run?

As Mia reevaluates their difficult, shared history and launches her own investigation into the grisly murder, she uncovers secrets that could exonerate Lucas―or seal his fate. In a small town where everyone’s lives are intertwined, Mia must confront her own demons if she wants to get out alive.

City of Light, City of Poison by Holly Tucker

Appointed to conquer the “crime capital of the world,” the first police chief of Paris faces an epidemic of murder in the late 1600s. Assigned by Louis XIV, Nicolas de La Reynie begins by clearing the streets of filth and installing lanterns throughout Paris, turning it into the City of Light.

The fearless La Reynie pursues criminals through the labyrinthine neighborhoods of the city. He unearths a tightly knit cabal of poisoners, witches, and renegade priests. As he exposes their unholy work, he soon learns that no one is safe from black magic―not even the Sun King. In a world where a royal glance can turn success into disgrace, the distance between the quietly back-stabbing world of the king’s court and the criminal underground proves disturbingly short. Nobles settle scores by employing witches to craft poisons and by hiring priests to perform dark rituals in Paris’s most illustrious churches and cathedrals.

As La Reynie continues his investigations, he is haunted by a single question: Could Louis’s mistresses could be involved in such nefarious plots? The pragmatic and principled La Reynie must decide just how far he will go to protect his king. 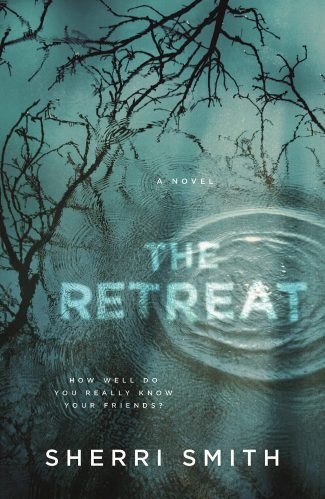 The Retreat by Sherri Smith illuminates the dark side of the self-care and wellness industry in a thrilling ride of revenge that asks: how well do you really know your friends?