This week, a new John Grisham highlights a HUGE week for publishing! See what else we're reading:

He Said/She Said by Erin Kelly

In the summer of 1999, Kit and Laura travel to a festival in Cornwall to see a total eclipse of the sun. Kit is an eclipse chaser; Laura has never seen one before. Young and in love, they are certain this will be the first of many they’ll share.

But in the hushed moments after the shadow passes, Laura interrupts a man and a woman. She knows that she saw something terrible. The man denies it. It is her word against his.

The victim seems grateful. Months later, she turns up on their doorstep like a lonely stray. But as her gratitude takes a twisted turn, Laura begins to wonder―did she trust the wrong person?

15 years later, Kit and Laura married are living under new names and completely off the digital grid: no Facebook, only rudimentary cell phones, not in any directories. But as the truth catches up to them, they realize they can no longer keep the past in the past.

When editor Susan Ryeland is given the manuscript of Alan Conway’s latest novel, she has no reason to think it will be much different from any of his others. After working with the bestselling crime writer for years, she’s intimately familiar with his detective, Atticus Pünd, who solves mysteries disturbing sleepy English villages. An homage to queens of classic British crime such as Agatha Christie and Dorothy Sayers, Alan’s traditional formula has proved hugely successful. So successful that Susan must continue to put up with his troubling behavior if she wants to keep her job.

Conway’s latest tale has Atticus Pünd investigating a murder at Pye Hall, a local manor house. Yes, there are dead bodies and a host of intriguing suspects, but the more Susan reads, the more she’s convinced that there is another story hidden in the pages of the manuscript: one of real-life jealousy, greed, ruthless ambition, and murder.

A gang of thieves stage a daring heist from a secure vault deep below Princeton University’s Firestone Library. Their loot is priceless, but Princeton has insured it for twenty-five million dollars.

Bruce Cable owns a popular bookstore in the sleepy resort town of Santa Rosa on Camino Island in Florida. He makes his real money, though, as a prominent dealer in rare books. Very few people know that he occasionally dabbles in the black market of stolen books and manuscripts.

Mercer Mann is a young novelist with a severe case of writer’s block who has recently been laid off from her teaching position. She is approached by an elegant, mysterious woman working for an even more mysterious company. A generous offer of money convinces Mercer to go undercover and infiltrate Bruce Cable’s circle of literary friends, ideally getting close enough to him to learn his secrets.

But eventually Mercer learns far too much, and there’s trouble in paradise.

Jane Bunker thought she’d escaped the pollution, noise, and dead bodies of the big city when she left her job as a Miami homicide detective and moved back to the idyllic town of Green Haven, Maine. But through her work as a marine insurance investigator, it appears she’s left behind the bustle of the city, but not the murder.

When Jane is called to the remote Acadia Island to assess the damages from a house fire, she also finds a badly burned body in the charred rubble, and it turns out that the victim is the owner of the house, a wealthy woman who just happens to be one of the most hated women in town. As Jane investigates further, she becomes embroiled in a plot as thick as New England clam chowder, which involves convicted felons, a real estate scam, and the deep conflicts between the locals and the summer folks.

On top of trying to find what might be a murderer on the loose, Jane is still living with her bonkers landlords, the Vickersons, who are delighted when Jane finds out that her brother Wally (who has Down’s syndrome) is going to move in with them, after losing his assisted living arrangement. It’s all Jane can do to keep all the moving pieces together, much less figure out who would want to burn someone alive―and why.

The Daughter of Sherlock Holmes by Leonard Goldberg

1914. Joanna Blalock’s keen mind and incredible insight lead her to become a highly-skilled nurse, one of the few professions that allow her to use her finely-tuned brain. But when she and her ten-year-old son witness a man fall to his death, apparently by suicide, they are visited by the elderly Dr. John Watson and his charming, handsome son, Dr. John Watson Jr. Impressed by her forensic skills, they invite her to become the third member of their investigative team.

Caught up in a Holmesian mystery that spans from hidden treasure to the Second Afghan War of 1878-1880, Joanna and her companions must devise an ingenious plan to catch a murderer in the act while dodging familiar culprits, Scotland Yard, and members of the British aristocracy. Unbeknownst to her, Joanna harbors a mystery of her own. The product of a one-time assignation between the now dead Sherlock Holmes and Irene Adler, the only woman to ever outwit the famous detective, Joanna has unwittingly inherited her parents’ deductive genius. Betencourt struggle to stay one step ahead of the killer—and deal with painful episodes in the past—Ben’s own world is rocked again by violence. He must decide how far he is willing to go, and Natasha how much she is willing to risk, to protect their friendship and themselves to rescue the town from a psychotic murderer and a long-buried secret. 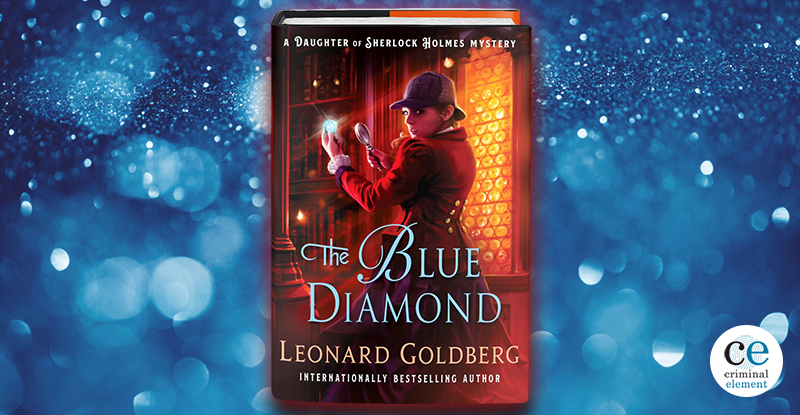 Chapter One The Penthouse Robberies It was customary for my dear wife, Joanna, to situate herself at the window of our parlor at 221b Baker Street and observe the ongoings down below. On more than a few occasions the view of an individual approaching our doorstep heralded the arrival of a most intriguing case which…