This week, David Rosenfelt’s 17th Andy Carpenter novel combines with a terrifying debut from Zoje Stage to highlight a killer week of books! See what else we’re reading: 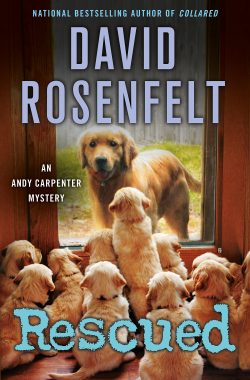 Defense lawyer Andy Carpenter is reluctant to take on any more cases. He’d much rather spend his time working for his dog rescue organization, the Tara Foundation, than find himself back in a courtroom. However, when a truck carrying over seventy dogs from the South to the rescue-friendly northeast turns up with a murdered driver, Andy can’t help but get involved.

Of course, Andy is eager to help the dogs, many of whom come to the Tara Foundation while awaiting forever homes—it’s the man accused of murder who he has a problem defending. The accused just happens to be his wife Laurie’s ex-fiance; her tall, good-looking, ex-Marine ex-fiance. Even though he acknowledges having argued with the victim, he swears that he is not a killer, and though he would rather not, Andy has to admit he believes he’s telling the truth.

For Andy, even with dozens of successful cases behind him, this case that his wife insists he take may prove to be his most difficult.

Read an excerpt from Rescued, then check out Doreen Sheridan’s review! 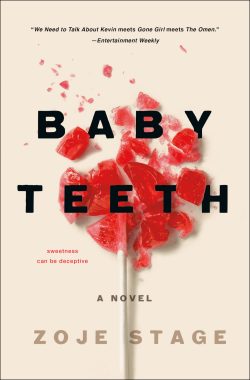 Afflicted with a chronic debilitating condition, Suzette Jensen knew having children would wreak havoc on her already fragile body. Nevertheless, she brought Hanna into the world, pleased and proud to start a family with her husband, Alex. Estranged from her own mother, Suzette is determined to raise her beautiful daughter with the love, care, and support she was denied.

But Hanna proves to be a difficult child. Now seven years old, she has yet to utter a word despite being able to read and write. Defiant and anti-social, she refuses to behave in kindergarten classes, forcing Suzette to homeschool her. Resentful of her mother’s rules and attentions, Hanna lashes out in anger, becoming more aggressive every day. The only time Hanna is truly happy is when she’s with her father. To Alex, she’s willful and precocious but otherwise the perfect little girl, doing what she’s told.

Suzette knows her clever and manipulative daughter doesn’t love her. She can see the hatred and jealousy in her eyes. And as Hanna’s subtle acts of cruelty threaten to tear her and Alex apart, Suzette fears her very life may be in grave danger…

Read an excerpt from Baby Teeth, then take a visual tour with GIFnotes! 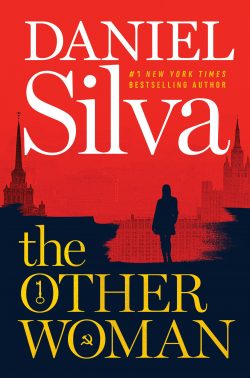 The Other Woman by Daniel Silva

She was his best-kept secret…

In an isolated village in the mountains of Andalusia, a mysterious Frenchwoman begins work on a dangerous memoir. It is the story of a man she once loved in the Beirut of old, and a child taken from her in treason’s name. The woman is the keeper of the Kremlin’s most closely guarded secret. Long ago, the KGB inserted a mole into the heart of the West—a mole who stands on the doorstep of ultimate power.

Only one man can unravel the conspiracy: Gabriel Allon, the legendary art restorer and assassin who serves as the chief of Israel’s vaunted secret intelligence service. Gabriel has battled the dark forces of the new Russia before, at great personal cost. Now he and the Russians will engage in a final epic showdown, with the fate of the postwar global order hanging in the balance.

Gabriel is lured into the hunt for the traitor after his most important asset inside Russian intelligence is brutally assassinated while trying to defect in Vienna. His quest for the truth will lead him backward in time, to the twentieth century’s greatest act of treason, and, finally, to a spellbinding climax along the banks of the Potomac River outside Washington that will leave readers breathless. 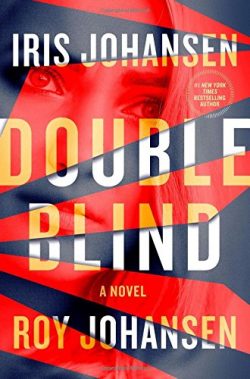 Kendra Michaels, formerly blind and now a hired gun for law enforcement agencies who relies on her razor-sharp powers of observation, is reluctant to help the FBI with the most recent case they’ve brought to her. But then she hears the details: the body was found just blocks away from Kendra’s condo. The young woman was carrying an envelope with Kendra’s name on it, and inside was an SD card with what appears to be an innocuous video of a wedding reception. The woman died trying to get the video to Kendra, but for what purpose? Before Kendra and the FBI can answer that question, the bride is abducted from her suburban home.

And so the hunt is on for a killer whose nightmarish plan is slowly becoming clear. A plan that involves a powerful law firm and a multi-billion dollar corporation. As the body count rises, Kendra joins forces with private investigator Jessie Mercado and agent-for-hire Adam Lynch to stop the plot as it grows ever closer to its terrifying conclusion.

Read an excerpt from Double Blind! 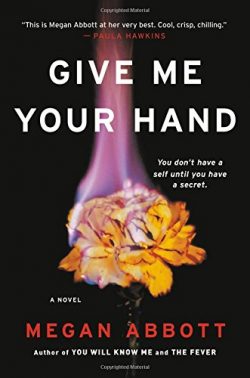 Give Me Your Hand by Megan Abbott

Kit Owens harbored only modest ambitions for herself when the mysterious Diane Fleming appeared in her high school chemistry class. But Diane’s academic brilliance lit a fire in Kit, and the two developed an unlikely friendship. Until Diane shared a secret that changed everything between them.

More than a decade later, Kit thinks she’s put Diane behind her forever and she’s begun to fulfill the scientific dreams Diane awakened in her. But the past comes roaring back when she discovers that Diane is her competition for a position both women covet, taking part in groundbreaking new research led by their idol. Soon enough, the two former friends find themselves locked in a dangerous game of cat-and-mouse that threatens to destroy them both.