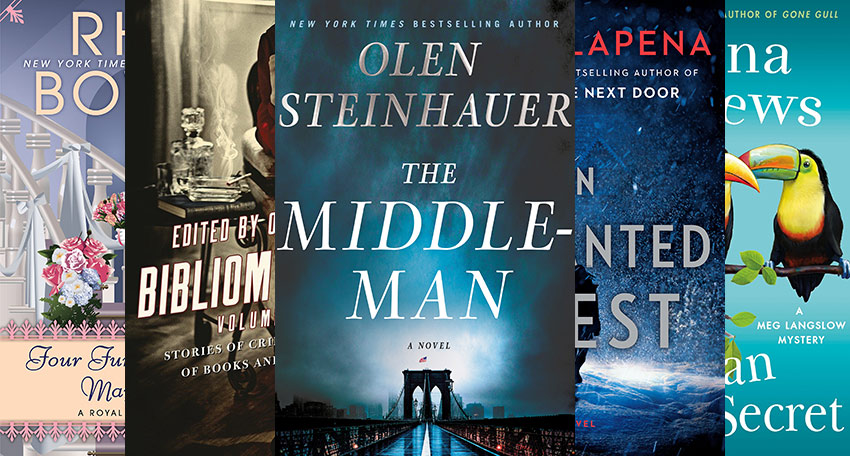 This week, Olen Steinhauer’s contemporary thriller combines with another fantastic anthology edited by Otto Penzler to highlight a great week of books! See what else we’re reading: 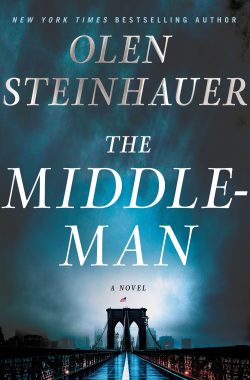 The Middleman by Olen Steinhauer

One day in the early summer of 2017, about four hundred people disappear from their lives. They leave behind cell phones, credit cards, jobs, houses, families—everything—all on the same day. Where have they gone? Why? The only answer, for weeks, is silence.

Kevin Moore is one of them. Former military, disaffected, restless, Kevin leaves behind his retail job in San Francisco, sends a goodbye text to his mother, dumps his phone and wallet into a trash can, and disappears.

The movement calls itself the Massive Brigade, and they believe change isn’t coming fast enough to America. But are they a protest organization, a political movement, or a terrorist group? What do they want? The FBI isn’t taking any chances. Special Agent Rachel Proulx has been following the growth of left-wing political groups in the U.S. since the fall of 2016 and is very familiar with Martin Bishop, the charismatic leader of the Massive Brigade. But she needs her colleagues to take her seriously in order to find these people before they put their plan—whatever it is—into action.

What Rachel uncovers will shock the entire nation, and the aftermath of her investigation will reverberate through the FBI to the highest levels of government.

Read an excerpt from The Middleman! 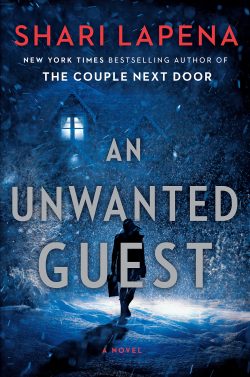 An Unwanted Guest by Shari Lapena

A weekend retreat at a cozy mountain lodge is supposed to be the perfect getaway, but when the storm hits, no one is getting away.

It’s winter in the Catskills and Mitchell’s Inn, nestled deep in the woods, is the perfect setting for a relaxing—maybe even romantic—weekend away. It boasts spacious old rooms with huge woodburning fireplaces, a well-stocked wine cellar, and opportunities for cross-country skiing, snowshoeing, or just curling up with a good murder mystery.

So when the weather takes a turn for the worse, and a blizzard cuts off the electricity—and all contact with the outside world—the guests settle in for the long haul.

Soon, though, one of the guests turns up dead—it looks like an accident. But when a second guest dies, they start to panic.

Within the snowed-in paradise, something—or someone—is picking off the guests one by one. And there’s nothing they can do but hunker down and hope they can survive the storm. 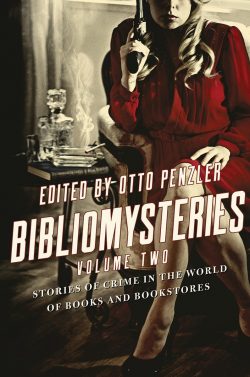 If you like mysteries and you like books, what could be better than combining both worlds, with mysteries set against a background involving books?

This collection of crime for bibliophiles includes stories about rare books, bookshops, libraries, manuscripts, magical books, collectors―in short, the wonderful universe that makes this precious object we all love so important and priceless. Ian Rankin sets his tale of the lost original manuscript of Dr. Jekyll and Mr. Hyde in the legendary Paris bookshop Shakespeare & Co., while F. Paul Wilson offers a book with remarkable powers. Joyce Carol Oates portrays an overly ambitious dealer in mystery fiction, while James Grady has the “Condor” working in the Library of Congress. Stephen Hunter tells a previously unknown story of Alan Turing set during World War I―involving a book that could change the history of the world―and Peter Lovesey writes about a box full of Agatha Christie titles that just may be priceless. Carolyn Hart’s story is about an astonishing inscription in a book, while Megan Abbott and Denise Mina add their Edgar-nominated stories to this stellar collection.

Whether your taste is for the traditional mystery, something a little more hardboiled, or the bizarre and humorous tale, you will find exactly your cup of tea in this outstanding collection of fifteen stories by the most distinguished mystery writers working today. 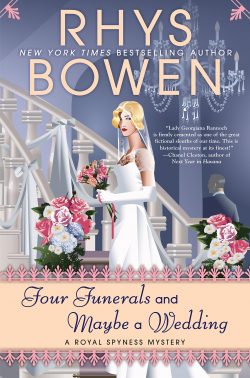 Four Funerals and Maybe a Wedding by Rhys Bowen

If only Darcy and I had eloped! What I thought would be a simple wedding has been transformed into a grand affair, thanks to the attendance of the queen, who has offered up the princesses as bridesmaids. Silly me! I thought that withdrawing from the royal line of succession would simplify my life. But before Darcy and I tie the knot in front of queen and country, we have to find a place to live as man and wife.

House hunting turns out to be a pretty grim affair. Just as we start to lose hope, my globetrotting godfather offers us his fully staffed country estate. Mistress of Eynsleigh I shall be! With Darcy off in parts unknown, I head to Eynsleigh alone, only to have my hopes dashed. The grounds are in disarray and the small staff is suspiciously incompetent. Not to mention the gas tap leak in my bedroom, which I can only imagine was an attempt on my life. Something rotten is afoot—and bringing the place up to snuff may put me six feet under before I even get a chance to walk down the aisle.

Read an excerpt from Four Funerals and Maybe a Wedding! 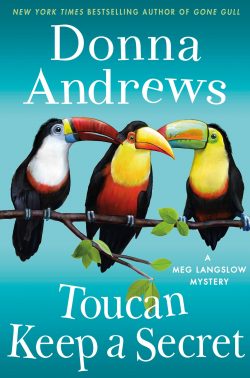 Toucan keep a secret, if one of them is dead.

Meg Langslow is at Trinity Episcopal Church locking up after an event and checking on the toucan her friend Rev. Robyn Smith is fostering in her office. When she investigates the sound of hammering in the columbarium (the underground crypt where cremated remains are buried), Meg finds the murdered body of an elderly parishioner. Several niches have been chiseled open, several urns knocked out, and amid the spilled ashes is a gold ring with a huge red stone.

The curmudgeonly victim had become disgruntled with the church and ranted all over town about taking back his wife’s ashes. Did someone who had it in for him follow him to the columbarium? Or was the motive grave robbery? Or did he see someone breaking in and investigate? Why was the ruby left behind?

While Chief Burke investigates the murder, Robyn recruits Meg to contact the families of the people whose ashes were disturbed. While doing so, Meg learns many secrets about Caerphilly’s history―and finds that the toucan may play a role in unmasking the killer. Clues and events indicate that a thief broke into the church to steal the toucan the night of the murder, so Meg decides to set a trap for the would-be toucan thief―who might also be the killer.

Read an excerpt from Toucan Keep a Secret, then check out Amber Keller’s review!