This week brought some familiar faces and stunning newcomers to the table! Kent Lester published a haunting debut novel, David Baldacci released the 3rd thrilling installment in his Amos Decker series, and Sasscer Hill gave us the 1st in her new Fia Mckee Mystery series. See what else this week brings in the way of books:

Before there was Lisbeth Salander, before there was Stephanie Plum, there was V.I. Warshawski. To her parents, she's Victoria Iphigenia. To her friends, she's Vic. But to clients seeking her talents as a detective, she's V.I. And her new case will lead her from her native Chicago… and into Kansas, on the trail of a vanished film student and a faded Hollywood star.

Accompanied by her dog, V.I. tracks her quarry through a university town, across fields where missile silos once flourished — and into a past riven by long-simmering racial tensions, a past that holds the key to the crimes of the present. But as the mysteries stack up, so does the body count. And in this, her toughest case, not even V.I. is safe.

When an earthquake reveals a secret cave hidden inside Mount Ararat in Turkey, a daring, newly-engaged couple are determined to be the first ones inside…and what they discover will change everything.

The cave is actually an ancient, buried ship that many quickly come to believe is really Noah’s Ark. When a team of scholars, archaeologists, and filmmakers make it inside the ark, they discover an elaborate coffin in its recesses. Inside the coffin they find an ugly, misshapen cadaver―not the holy man they expected, but a hideous creature with horns. Shock and fear turn to horror when a massive blizzard blows in, trapping them thousands of meters up the side of a remote mountain. All they can do is pray for safety. But something wicked is listening to their prayers…and it wants to answer.

Read an excerpt from Ararat!

The Fix by David Baldacci

Amos Decker witnesses a murder just outside FBI headquarters. A man shoots a woman execution-style on a crowded sidewalk, then turns the gun on himself.

Even with Decker's extraordinary powers of observation and deduction, the killing is baffling. Decker and his team can find absolutely no connection between the shooter—a family man with a successful consulting business—and his victim, a schoolteacher. Nor is there a hint of any possible motive for the attack.

Enter Harper Brown. An agent of the Defense Intelligence Agency, she orders Decker to back off the case. The murder is part of an open DIA investigation, one so classified that Decker and his team aren't cleared for it.

But they learn that the DIA believes solving the murder is now a matter of urgent national security. Critical information may have been leaked to a hostile government—or worse, an international terrorist group—and an attack may be imminent.

Decker's never been one to follow the rules, especially with the stakes so high. Forced into an uneasy alliance with Agent Brown, Decker remains laser focused on only one goal: solving the case before it's too late.

Baltimore police officer Fia McKee is put on leave for excessive use of force after interfering in a crime that turns deadly. Given a second chance, she is sent to work undercover for the Thoroughbred Racing Protective Bureau (TRPB) at the Gulfstream Park in Florida, where she works as an exercise rider. Her assignment is to watch and report back on two racetrack workers who have been suspected of illegal activities and whose horses continue to outperform all expectations, winning their owners unseemly amounts of money in the races.

To complete her cover story, Fia moves in with her semi-estranged brother, Patrick, who lives near the racetrack. Her investigations are complicated when her niece, Jilly, disappears after a shadow gang takes Jilly’s beloved horse. Now Fia must work two angles―first to find out what’s really going on with the men who might or might not be gaming the system, and second to bring the men who prey on horses to justice. Along the way, Fia encounters Cuban gangs living off the grid, a (very handsome) do-gooder who’s close on their trail, and a cabal of super wealthy gamblers who will stop at nothing to ensure they always win.

Read an excerpt from Flamingo Road while sipping on a cocktail inspired by the novel!

The Seventh Sun by Kent Lester

A seemingly random murder alerts scientist Dan Clifford to a global conspiracy that stretches from the halls of Washington to the Honduran coast. Illegal, undersea activities have unwittingly uncovered a primordial secret that is wreaking havoc on aquatic life and the local human population.

When the CDC and the full resources of a U.S. “threat interdiction” team fails to uncover the source of the devastation, Dan and a brilliant marine biologist, Rachel Sullivan, must race to unravel an unimaginable, ancient mystery in the murky depths. It's up to them to stop this terror before a determined multi-national corporation triggers a worldwide extinction event, the Seventh Sun of ancient myth.

Read an excerpt from The Seventh Sun! 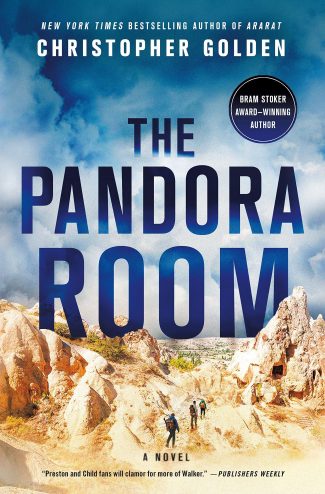 The Pandora Room from New York Times bestselling and Bram Stoker Award-winning author Christopher Golden turns ancient lore into a modern-day horror in a variation on the myth of Pandora’s Box, where there were two boxes: one contained blessings of the gods, the other all the world’s curses… One week before closing up shop in…