5 Intriguing Things I Learned While Researching Naughty on Ice

Read about all the interesting things Maia Chance learned while researching her latest Discreet Retrieval Agency Mystery, then comment below for a chance to win a copy of Naughty on Ice! 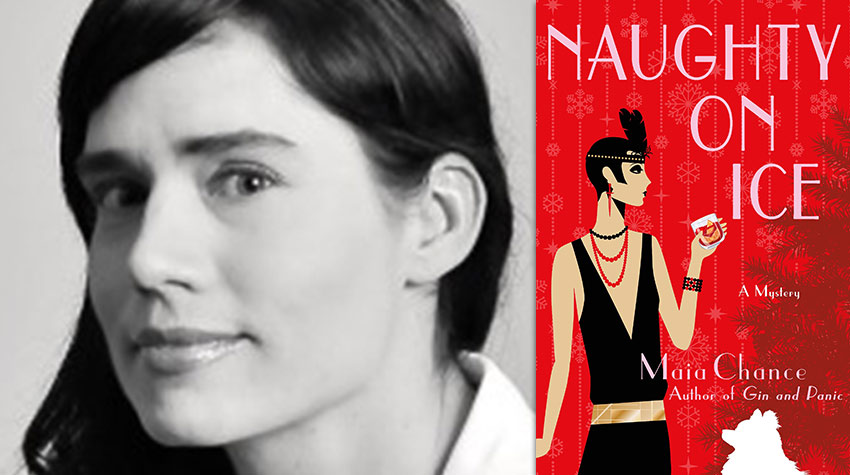 How to Make a Negroni

When my 1920s-set mystery novel required an apéritif that was both sinister and festive, I thought: Negroni. The only trouble was I had never actually drunk one. I’m not a fan of Campari. Not only does it remind me unpleasantly of an ex-boyfriend’s judgy, country-club type father, but it originally derived its glowing scarlet hue from carmine, which is made from boiled bugs. Also, I was appalled to learn that Campari contains … rhubarb.

The Negroni was allegedly invented in Florence, Italy, in 1919, and although it wasn’t popular in 1920s America, my murderee is a wealthy cosmopolitan who could have been exposed to the cocktail. (In the ‘20s, the trendy Campari cocktail was the comparatively lily-livered Americano, with club soda in place of the Negroni’s gin.)

A Negroni is made of equal parts Campari, gin, and sweet vermouth, stirred over ice and garnished with a twist of orange. Feeling very vintage, I ordered one at a bar. The verdict: although the sweet vermouth tones things down, it is still bitter, herbal, and decidedly Campari-flavored. And strong. I decided it would serve nicely for a murder.

How Booze Was Smuggled from Canada into New England

I had done some research on this topic already since bootlegging appears in all of my Discreet Retrieval Agency mysteries. However, for Naughty on Ice, I needed to get into the nitty-gritty.

Take a visual tour through Naughty on Ice with GIFnotes!

Unlicensed drinking establishments called line houses were built just over the border, or even straddling the border, in Canada. Bootleggers would pick up contraband at line houses and transport it many miles south where they would deposit it at a holding facility. Some bootleggers carried alcohol on horseback, while others drove along perilous mountain roads, sometimes stashing alcohol in caves.

Intriguingly, while bootlegging operations were run by professional gangsters, much of the transport of alcohol from the border was done by locals who knew the roads. Young men, even teenagers, would get liquored up for courage at line houses and then set out with their risky cargo. Immigration road patrol officers, lurking in the lonely New England hills and dales, could often spot a bootlegger by his erratic driving.

All About One of Vermont’s Most Fabulous Historic Mansions

Burklyn Hall in Burke, Vermont, was the inspiration for Goddard Farm, the lavish country estate of the troubled family at the center of my story. What is more, the real-life biography of Elmer Darling (not joking), the local-boy-made-good who built Burklyn Hall, helped me shape the story of my fictional family.

You can get a really good look at this place on Zillow because it’s currently on the market for a touch under 3 million smackeroos. At more than 13,000 square feet, it’s a dollar-per-square-foot bargain, right?

The History of Downhill Skiing in 1920s America

I am not only a history nerd but a skier. So imagine my delight when I discovered an exhibit about the history of skiing in New England in the lower level of Bretton Woods Mountain Resort in New Hampshire. (My delight may have been deepened by the fact that every minute spent studying the exhibit was a minute not somersaulting down a black diamond behind my more athletic companions.)

That exhibit opened up an avenue of research that became a core part of Naughty on Ice. Downhill skiing was just catching on in the United States in the ‘20s, having been imported from Scandinavia and promoted by local ski clubs all over the country. Many of these ski clubs were even run by Scandinavian immigrants.

That Vermont Is Rife with Legendary Spooks and Monsters

You wouldn’t expect it of no-nonsense Yankees, but New England legend is saturated with creepy supernatural … things. Just read Robert Frost’s poem “The Witch of Coös” if you’re skeptical. That must be one of the most disturbing poems ever—although the fact that I first read it in a 1870s farmhouse in Vermont just across the Connecticut River from Coos County (yes, the place in which the poem is set), probably intensified my experience.

Some of the spooky things Vermonters can boast of: an oversupply of ghosts (the University of Vermont alone claims 14!), a cemetery statue called Black Agnes that might kill you if you sit on her lap, a phantom bear named Slipperyback that raids farms, the Pigman of Vermont (I think this one may have inspired a Seinfeld episode), and huge serpent-like monsters in Willoughby Lake and Lake Memphremagog. Either this is one supernaturally-charged region, or it’s the cabin fever talking. Either way, let’s keep the axes locked up, okay?

Read an excerpt from Naughty on Ice!

Comment below for a chance to win a copy of Naughty on Ice by Maia Chance!

Naughty on Ice Comment Sweepstakes: NO PURCHASE NECESSARY TO ENTER OR WIN.  A purchase does not improve your chances of winning.  Sweepstakes open to legal residents of 50 United States, D.C., and Canada (excluding Quebec), who are 18 years or older as of the date of entry.  To enter, complete the “Post a Comment” entry at http://www.criminalelement.com/5-intriguing-things-i-learned-while-researching-naughty-on-ice-comment-sweepstakes beginning at 1:00 p.m. Eastern Time (ET) November 29, 2018. Sweepstakes ends at 12:59 p.m. ET December 11, 2018. Void outside the United States and Canada and where prohibited by law. Please see full details and official rules here. Sponsor: Macmillan, 175 Fifth Ave., New York, NY 10010.

Maia Chance is the author of several mystery novels, including The Discreet Retrieval Agency mysteries, the Agnes and Effie Mysteries, and the Fairy Tale Fatal series. She lives with her husband and two children in Vashon Island, Washington.