April 15, 2021
As we get ready for the publication of Beyond the Headlines, the fourth book in R. G. Belsky's Clare Carlson Mystery series, Belsky visits the site to share his list of 5 celebrity crime stories that would seem totally unbelievable had they not really happened.

When you write mystery/thriller novels like I do, one of the questions frequently asked by editors, reviewers, and readers is: “But is this story really believable?” It’s a tough balance to maintain in a fiction book. If the story is totally “believable,” it might also be boring, But you don’t want to push the envelope too far and have people say your book is “unrealistic” and “never could happen” in real life. Or so the theory goes.

Except that’s not really true.

Especially when it comes to celebrity crime stories.

Because sometimes the true celebrity crime stories are even stranger than any fictional story an author like me could ever concoct.

I found that out as a journalist covering sensational celebrity news for many years at the New York Post, New York Daily News, Star magazine, and NBC News.

Now I write crime novels, and my latest is called Beyond the Headlines. It’s about a woman who is famous for being famous—sort of like a Kim Kardashian celebrity—that is accused of murdering her billionaire husband. My character, TV journalist Clare Carlson, has to untangle all the confusing evidence to find out the truth.

In the end, it’s a pretty crazy story.

But not nearly as crazy as many of the real-life celebrity crime stories I covered when I was a journalist.

Here’s a look at some of them:

When I worked at Star magazine back in the days when everyone got their celebrity news from the supermarket tabloids, Bill Cosby was on the front cover of the Star and the Enquirer and the rest a lot of times. Not because of any scandal or wrongdoing on his part. But simply because he was so popular with our audience. He was Cliff Huxtable, star of the hugely successful Cosby TV show and he was America’s favorite father. Or at least he was, until more recently when woman after woman came forward to accuse him of sexual assaults and improprieties. There were numerous civil lawsuits filed against him, and then finally a criminal complaint and trial—where Cosby was found guilty and sent to prison. Who would have believed back in the ‘80s that lovable Dr. Huxtable was going to wind up in a jail cell?

Even Hollywood couldn’t have produced a wild story like this! Back in 1977, I wrote a glowing biography of O.J. Simpson where I described him as not only a great football player, but a “great human being.” Lots of people agreed. O.J. was the most beloved athlete in America; the popular TV commercial spokesman for Hertz rental cars; and had even become a movie star with memorable acting roles in a series of hit films. Now that’s all forgotten, of course, and we just remember O.J. for the Nicole Brown Simpson/Ron Goldman murders, the Bronco chase and the classic trial which captivated the nation for so long. Hey, imagine a fiction author like me trying to sell that “unbelievable” tale to an editor back in the ‘70s.

The Robert Blake murder case wasn’t quite as shocking as O.J.—Blake had a more controversial history before the crime he was accused of committing—but it still was difficult for people to comprehend. Blake had been a big star years earlier in movies like In Cold Blood and Tell Them Willie Boy is Here, and then had an iconic role as the TV detective Baretta. But Blake’s big roles were mostly in the past when his wife Bonnie Lee Bakely was mysteriously shot to death in a parked car while Blake was in a nearby Los Angeles area restaurant. When the story broke at the Daily News where I worked in 2001, our first article was only a few paragraphs—a lot of people had forgotten about Robert Blake. But it turned out to be another classic Hollywood murder trial. Blake was eventually acquitted but later found liable for his wife’s murder in a civil suit. Wow! Bet he never saw any scripts like that on Baretta!

Okay, I’m too young to have covered Marilyn’s death from a drug overdose when it happened in 1962, but this is one of those celebrity crime stories that never goes away. And why not? The most glamorous star in Hollywood dies mysteriously. She’s reportedly been having a sexual affair with the President of the United States, John F. Kennedy—and maybe with his brother Robert too. There were also possible mob links from Marilyn’s connections with some of Hollywood’s elite. So did she kill herself with pills, did she die accidentally or was she murdered? Pick a theory, everyone has—but the truth about Marilyn Monroe’s death likely died with her a long time ago. Helluva story though, whether you go with fact or fiction.

No fiction author or Hollywood screenwriter has ever written a mystery story quite like this one. Three big movie stars on a boat off of Catalina Island: actress Natalie Wood, her husband Robert Wagner, and her current co-star Christopher Walken. There was drinking and an argument—and then Natalie supposedly went up on deck, accidentally slipped, and fell overboard to her death. But there have always been questions about what really happened on the water that tragic night. Not long ago, law enforcement officials—who had originally declared Natalie’s death “accidental”—reopened the investigation, based on a series of new interviews. Wagner, who was described as a “person of interest” in that inquiry, is now 91 years old and has always denied any involvement in his wife’s death. Unlike many of the movies he and Natalie made over the years, this story will likely never have an ending. And, even if it did, who would ever believe it? 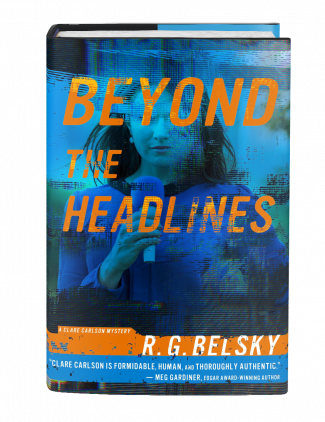 About Beyond the Headlines by R. G. Belsky:

Laurie Bateman was living the American dream. Since her arrival as an infant in the U.S. after the fall of Saigon, the pretty Vietnamese girl had gone on to become a supermodel, a successful actress, and, finally, the wife of one of the country’s top corporate dealmakers. That dream has now turned into a nightmare when she is arrested for the murder of her wealthy husband.

New York City TV journalist Clare Carlson does an emotional jailhouse interview in which Bateman proclaims her innocence—and becomes a cause celebre for women’s rights groups around the country.

At first sympathetic, then increasingly suspicious of Laurie Bateman and her story, Clare delves into a baffling mystery which has roots extending back nearly fifty years to the height of the Vietnam War.

Soon, there are more murders, more victims, and more questions as Clare struggles against dire evil forces to break the biggest story of her life.