At this point, it's probably only a matter of time until every superhero on the books gets their own movie or Netflix series. Some feel we're hitting saturation levels, and that's true to an extent.

But, the real issue with “Comic Adaptation Fatigue” isn't that we're necessarily tired of superheroes—we're just tired of seeing the same superheroes every five years. Truly, there are only so many Spider-man origin stories, so many gritty, grim-dark Batman epics we need OR want.

What Hollywood needs to remember is that variety is the spice of life. Rather than constantly playing it safe by incessantly rebooting the same ten characters, what audiences really want is brand new takes on brand new characters.

Delve into the underdogs and cult classics, screenwriters! Stretch yourselves and think outside the box. Adapt a comic series that isn't already a household name; turn it into a household name instead!

Netflix/Marvel is already way ahead of the game here—the Average Joe on the street didn't know who Jessica Jones was last year, and only serious comic fans knew about Luke Cage, Iron Fist, or—hell—the Guardians of the Galaxy.

I know it's a serious fight to get a chance-y pitch picked up by a studio. Movies are expensive, awash with red tape, and exceedingly more difficult to get made and distributed—which is why TV needs to become the great bastion for comic adaptations.

It's on TV (or Netflix, Hulu, Amazon Prime) where lesser-known properties could get a chance to shine and stretch out. The episodic nature allows for greater depth of world and character building—just the thing for a rich, complex comic story. Not to mention, it's way more likely to get a pilot season than a summer blockbuster.

Which is why I'm going to spotlight 10 comic series over the next 10 months that I think would make smashing television shows. I'll cover the gamut from classic superheroes to fantasy and sci-fi, both smaller-scale stories and sweeping epics, a couple series you've definitely heard of and a few I'm sure you haven't.

Here's a taste of what's to come… In the quaint little town of Burden's Hill, behind the white picket fences, all is not what it seems. There's black magic at work in this sleepy suburb, the roadkill comes back hungry, and witches and werewolves stalk the evening streets. It's a good thing the loyal pets of the neighborhood are up to these supernatural challenges.

Growing up is always difficult. Growing up and learning that a) you have superpowers and b) your parents are actually SUPERVILLAINS is extra craptastic. For these teens, running away from home may just be the best decision they've ever made. It's Boardwalk Empire meets Disney in Tracy Butler's Eisner-winning series about a Prohibition Era speakeasy—that's entirely populated by cats. Cats that are sharp dressers and pack plenty of heat, but cats nonetheless. 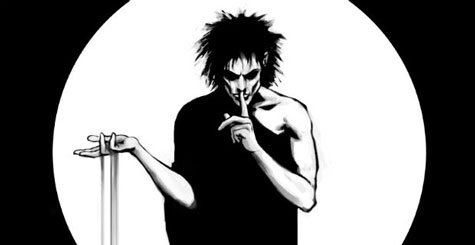 If you know fantasy or comics, you're already well aware of the luminous, horrific, incredible epic that is The Sandman. It's the series that really put Neil Gaiman on the map: a sprawling, philosophic meditation on gender, family, morality, mortality—and everything in between. When your central hero is the Sandman (aka Dream of the Endless) himself, you know you're in for a wild ride. You know what the RPG community needs more of? LADIES. (Actually, that's a trick question—everything needs more ladies.) For anyone who's ever played Dungeons and Dragons, this series features a highly uncouth bunch of ladies filling out the obligatory roles of dwarf, mage, warrior, etc., and is both hysterical and bloody as hell.

Take The Good, the Bad, and the Ugly. Throw in magic and plenty of monsters. And now make all of the desperados of the female persuasion. Creator Kelly Sue DeConnick hits yet another feminist homerun with this gloriously dark horror-western. The Guard are a brave brotherhood of warriors, healers, and explorers who patrol the wild paths of a medieval world, tasked with making it a safer place for the common mouse. When the threats include hungry snakes, crabs, and secret plots, the Guard will always have plenty on their paws in this charming series that's reminiscent of Redwall and Game of Thrones.

Who says superheroes always have to be serious, dark, or violent? In a landscape brimming with regal, muscular figures in dramatic costumes, the goofy Squirrel Girl is a refreshing change of pace. So what if her primary superpower is that she can talk to squirrels, and her best friend is a toothy rodent named Tippy Toes? That doesn't change the fact that she's also (canonically!) the most powerful hero in the Marvel universe! Squirrel Girl may not be as epic or dramatic as other supes, but she is lighthearted and fun. And what's wrong with having more of that? Is this the greatest comic currently running? Possibly. Marko and Alana are soldiers on opposing sides of an intergalactic war who meet, fall in love, marry, and have a forbidden child—the narrator of our story. They run, fight, part, and reunite in a series of stories that explore everything from ethnicity and gender identities to sexuality and the horrors of war. Truly, this is one of the best space operas out there. Welcome to the future, where robot assassins are available from vending machines on most street corners. Once their missions are complete, they self-destruct so there's no muss, no fuss, and no culpability. But when Scud, an average Heart Breaker Series 1373 model assassin, realizes he'll die if he successfully kills his target, things get a little…well, messy—and ridiculously funny.

With every week bringing announcements of new projects in development, there's a very real chance that this list may prove prescient—fingers crossed and here's hoping! But until the dream becomes reality, I hope you'll be tuning in here at Criminal Element every month to check out the latest installment.